History Behind the Parodied: OUR TOWN 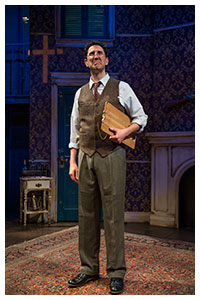 Sean Fortunato as The Stage Manager in DEATH OF A STREETCAR NAMED VIRGINIA WOOLF: A PARODY at WT. Photo by Michael Brosilow.

Famous Lines: “This is the way we were: in our growing up and in our marrying and in our living and in our dying.” “People are meant to go through life two by two.” ‘Tain’t natural to be lonesome.” “Do any human beings ever realize life while they live it?—every, every minute?” 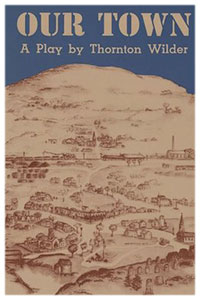 Our Town is the oldest of the four plays that make up our parody, and the only one not to have its name included in the title. However,the play’s groundbreaking influence on American theatre cannot be denied. The conceit of having a Stage Manager narrate and guide the story of small-town life in Grover’s Corners, New Hampshire with only tables and chairs for the scenery renewed the emphasis of theatre on the words and the artists. The sophistication and honesty with which Wilder explored adulthood and death laid the groundwork for the increasingly emotionally complex works of Williams, Miller and Albee. 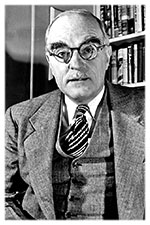 After out-of-town tryouts in Princeton and Boston that were met with little enthusiasm, Our Town found more success on Broadway. The production ran for 336 performances and won the 1938 Pulitzer Prize for Drama. With its universal appeal and relative ease to produce, Wilder’s play remains one of the most produced theatrical works each year. Too intrinsically theatrical to have the same appeal on screen that it does on stage, no definitive film adaptations exist. Writers Theatre opened its performance venue in the Woman’s Library Club in 2003 with Our Town, directed by William Brown, and David Cromer’s award-winning production of the play started in Chicago at The Hypocrites in 2008 before running for 648 performances off-Broadway.