History Behind the “Parodied”: DEATH OF A SALESMAN 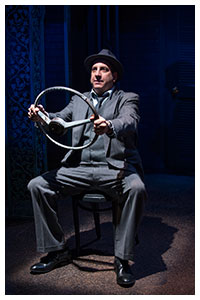 Marc Grapey as Willy Loman in DEATH OF A STREETCAR NAMED VIRGINIA WOOLF: A PARODY at WT. Photo by Michael Brosilow. 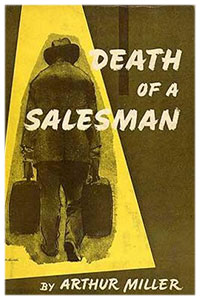 Death of a Salesman

Famous Lines: “I’m the New England man. I’m vital in New England.” “Attention must be paid.” “You can’t eat the orange and throw the peel away—a man is not a piece of fruit.” “After all the highways, and the trains, and the appointments, and the years, you end up worth more dead than alive.”

Arthur Miller had put himself on the map with his first major play, All My Sons, in 1947. Following up a debut success can be daunting, but Miller’s second effort exceeded the very high expectations set for him. Death of a Salesman, with its story of American everyman Willy Loman, was the perfect story for the times. As the surging U.S. economy readjusted to peacetime, modernization and technological advancement began to make certain professions and industries obsolete. The directness of the play’s title proclaimed the work’s importance to the moment and brought a profoundly affecting humanity to the collateral damage of an ever evolving American Dream. 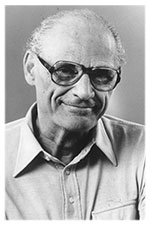 The original Broadway production of Death of a Salesman, directed by the celebrated Elia Kazan and starring Lee J. Cobb (best remembered for his work in the films Twelve Angry Men, On the Waterfront and The Exorcist) as Willy Loman, was an immediate success. The production ran for 742 performances and won Tony Awards for Best Play, Best Director, Best Supporting Actor (Arthur Kennedy as Biff) and Best Scenic Design (Jo Mielziner). The play also won the 1949 Pulitzer Prize for Drama.

Other notable actors to play Willy include George C. Scott, Dustin Hoffman and Philip Seymour Hoffman. Chicago audiences got to see Robert Falls’s production starring Brian Dennehy as Willy at Goodman Theatre in 1999 before it transferred to Broadway and won four Tony Awards. Although there has never been a definitive cinematic version of the play, its constant presence on national stages, compounded by its universal inclusion in any class on modern literature or drama, cemented the play as one of the 20th century’s most important stories.