Scripts written for only two actors continue to grow in popularity 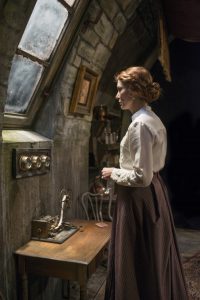 Pictured: Shannon Cochran in Writers Theatre’s production of The Dance of Death (2014). Photo by Michael Brosilow.

A two-person play is playwriting at its most concentrated and essential.

Everything—exposition, conflict, intrigue, poetry—must come from the mouths of only two people, often in one location with the story playing out in real time from lights up to lights down. After the classic Broadway musical, the two-hander (as it is called in the industry) might be the American theatre’s most significant contribution to world drama.

If you take the less stringent definition of the term two-hander, the Ancient Greek playwright Aeschylus was the first person to write one. Before him, Greek tragedies featured a Chorus interacting with a single actor playing the main character. Aeschylus added a second actor, allowing the two characters to interact with and come into conflict with each other. The chorus remained, however, and so there was never
only two people on stage for an entire play. Subsequent eras also had no need for economy when it came to the number of performers in a play. Sophocles, Euripides, Marlowe, Shakespeare, Jonson, Moliere, Schiller, Wilde, Shaw: none of these classic writers ever wrote a full-length play for just two actors.

The first true experimenter with minimal cast sizes was Swedish playwright August Strindberg. Most of Strindberg’s plays feature a central couple whose lives are disrupted by an outsider. The Dance of Death, which WT produced at Books on Vernon in 2014, tells the story of how Edgar and Alice escalate their marital gamesmanship after the arrival of Alice’s cousin, Kurt. The Father, Miss Julie and Creditors all follow a similar structure of an upended status quo. With his 1889 play, Pariah, Strindberg reduced his cast to two actors for the first time. The play about two men sheltering in a barn during a storm is the first to tell a full-length dramatic narrative in real time with only two performers.

Another Strindberg two-hander from 1889, The Stronger, featured only two actors, one who speaks and one who doesn’t. This conceit is called a dramatic monologue. Other dramatists would utilize this form as well, writing plays where one character does all or most of the talking. Notable examples include Eugene O’Neill’s Hughie, Terrence McNally’s Andre’s Mother and Craig Wright’s Mistakes Were Made. Strindberg’s innovations had a profound influence on mid-20th century absurdist playwrights who continued his economy of scale even as they moved their stories out of naturalism. Samuel Beckett’s masterpiece, Waiting for Godot, follows two characters in isolation for most of its length, as does Eugene Ionesco’s The Chairs, another absurdist classic. Harold Pinter would write a true two-hander with The Dumb Waiter, taking a step towards realism while maintaining an otherworldly sense of menace.

However, the golden age of the two-hander would begin with Edward Albee’s breakthrough play, The Zoo Story. The story of two strangers who have a life changing chance encounter in Central Park, Albee followed Strindberg’s lead in writing a play that progresses in real time with only two actors. The 1960 Off-Broadway production of The Zoo Story ran for over a year and would have a profound influence on playwriting for the remainder of the 20th century. In the play’s wake, American playwrights continued to refine and popularize the two-hander form. Some landmark examples include Donald L. Colburn’s The Gin Game, Lanford Wilson’s Talley’s Folly, Marsha Norman’s ‘night, Mother, Charles Ludlam’s The Mystery of Irma Vep, Terrence McNally’s Frankie & Johnny in the Clair de Lune, A.R. Gurney’s Love Letters, David Mamet’s Oleanna and Suzan-Lori Parks’ Topdog/Underdog. Most of these plays were winners or finalists for the Pulitzer Prize for Drama and all of them have been produced regularly around the country.

The two-hander continues to thrive in the 21st century, and playwrights continue to innovate with the form. History has been dramatized (Katori Hall’s The Mountaintop about MLK, Mark St. Germain’s Freud’s Last Session about Sigmund Freud and C.S. Lewis and John Logan’s Red about Mark Rothko) and so have legends (Rajiv Joseph’s Guards at the Taj). Stories can span one-long scene (David Ives’ Venus in Fur), a couple of scenes over a short period of time (Jen Silverman’s The Roommate), an entire life (Duncan MacMillan’s Lungs), or several dimensions at once (Nick Payne’s Constellations). Dramatic monologues survive (Keith Huff’s A Steady Rain) and even musicals have toyed with the form (Jason Robert Brown’s The Last Five Years). 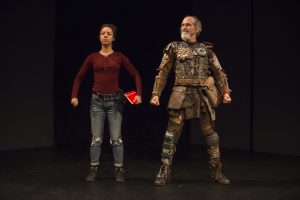 Pictured: Emma Ladji and Henry Godinez in Writers Theatre’s production of Quixote: On the Conquest of Self (2017). Photo by Michael Brosilow.

Given the intimate spaces that have always been a hallmark of Writers Theatre, two-handers have been an important part of our production history. The Books on Vernon venue was a perfect environment for two-handers, and WT’s earlier years featured many of them: Dorothy Bryant’s Dear Master, Stephen McDonald’s Not About Heroes, Jerome Kilty’s Dear Liar, Elliot Hayes’ Blake, John Murrell’s Memoir. One of WT’s biggest successes was Russell Lees’ Nixon’s Nixon starring Larry Yando as Richard Nixon and William Brown as Henry Kissinger. The 2000 hit production was revived again in 2008 for an encore run. Another two-hander hit was John Lowell’s The Letters starring Kate Fry and Mark L. Montgomery. WT’s fondness for two-handers has continued after the move into our new home. In 2017, WT produced the American premiere of Mónica Hoth and Claudio Valdes Kuri’s Quixote: On the Conquest of Self, and last season included a staging of Caryl Churchill’s sci-fi thriller, A Number.

The Niceties has the distinction of being the first two-hander to play in the Alexandra C. and John D. Nichols Theatre. With its mix of thoughtful ideas, bold characters, disarming humor and explosive conflict, Eleanor Burgess’ breakout play shows the two-hander still has the power to entertain.