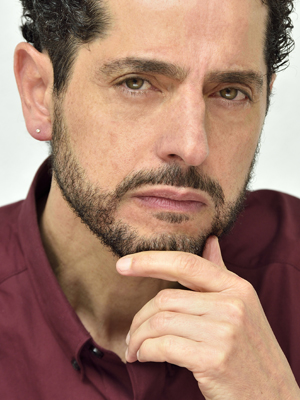 At Writers Theatre: Quixote: On the Conquest of Self

Claudio Valdés Kuri, Mexican director and playwright, is one of the most recognized Latin American stage artists in the world. His creations have been praised in more than 200 cities over the five continents. He has received important awards and recognitions from national and international specialized critics. He occupies a place of extraordinary relevance within the theater community of Mexico and has managed to renew and expand an interest in theater within social sectors that have traditionally not been involved in the performance arts. He is a pioneer in bringing Mexican theater through multiple routes and international forums where our nation had never been present before. In several occasions, his productions have opened cultural centers, or have been the opening or closing events of encounters and festivals of theater, cinema, music and interdisciplinary art.

His training as an actor and musician began at an early age with theatrical director Susana Wein and pianist Erika Kubacksek. He was an actor in the Austrian company Carpa Theater. He founded the prominent early music vocal ensemble ARS NOVA, dedicated to the rescue and performance of Mexican Baroque music, with which he toured throughout more than 30 countries and made several recordings. He graduated highest honors from the Cinematographic Training Center, Mexico’s premier film school.

In 1997, he founded TEATRO DE CIERTOS HABITANTES, a company in which he could put into practice his interdisciplinary vocation as an actor, musician and cinematographer. Since his first staging, his original vision successfully burst forth into the national scene, achieving sold-out seasons and starting an international career that was unprecedented in the history of the Mexican theater. Since then, other iconic creations followed, which developed innovative methods for co-production and international commissions. These performances have placed Mexican theater and dramaturgy in the most renowned forums and festivals around the world. At the same time, Valdés Kuri has attended to remote or vulnerable communities, without abandoning his commitment to taking risks and maintaining his artistic integrity. His creative processes are always a gamble in order to expand the expressive possibilities of the actor and the resources of the stage; the expansion of knowledge and consciousness; and the common good.

Each of his productions, distinguished by their originality and quality in content and form, are the result of several years of research and of intense and prolonged laboratory processes of scenic creation. Constant renewal is another of the values of his work, since each of his performances is different from the previous one, aiming not to repeat formulas or findings. The significant strength and richness of his processes have made each staging a global project, generating lecture series, films, television programs, recordings, radio series, art and photographic exhibitions, and published books.

In his company, made up by citizens from Mexico and from other parts of the world, Valdés Kuri has formed several artists that have been influenced by his methods and have moved on to form other groups and to develop successful careers. He has established relationships with groups, artists, educational institutions and promoters from around the world.

The reliability of his company, as well as the genius of its stagings, have placed him as one of the most respected and admired figures of the theater world, and as one of the most inspiring and stimulating influences for new generations. His work has provoked enthusiasm in great personalities from very diverse backgrounds, such as singer David Bowie and film critic Roger Ebert. His stagings and texts have been the object of analysis and academic studies in important publications as well as educational and cultural institutions inside and outside the country. He has obtained important grants from national and international organizations. The magazine Mexican Leaders has named him one of the most outstanding leaders in the country.

He is constantly invited as a teacher, tutor, lecturer and jury because of his expertise in theater and the interdisciplinary stage. He provides artistic, administrative and structural advice to other companies and young artists.

The desire to transmit the knowledge and experience acquired by him and his collective, has motivated Valdés Kuri to create the Center for Performing Arts ARTBORETUM. This is a project that joins together art, ecology, community and human development. This space, located in a natural environment of ideal conditions, is dedicated to the research, creation, meeting and teaching of the performing arts for students, artists, and groups from all backgrounds.

Claudio Valdés Kuri is an example of integrity, intuition, perseverance, originality, audacity and quality. Throughout more than three decades of uninterrupted work, Valdés Kuri has broken paradigms and stereotypes. He is a key figure that has placed and sustained Mexico as a reference in stage creation throughout the world.