“Theatre in a Park”

— a driving concept behind the design

With Friends Park to its west and the Woman’s Library Club Park to the east, our new building was designed with a strong connection to the nature that surrounds it. In addition to incorporating natural elements—reusing the oak and elm trees that were originally located on the site as interior finishes in the Litowitz Atrium and including numerous floor-to-ceiling windows that allow visitors to enjoy those surrounding parks—many other specific landscaping choices have been made. Our landscape architects, Coen + Partners from Minneapolis, recently won the 2015 Smithsonian Cooper-Hewitt National Design Award and bring enormous expertise to the project.

There are four major landscaping components at ground level that surround the new theatre center: a hedgerow, an area of Japanese forest grass, a birch grove and Boston ivy, as seen in these images:

The birch grove will be to the east of the building, as featured in this rendering.

It will nest between the Gillian Theatre and Glencoe Drive to provide privacy and screening from the street. The birch trees’ slender shape is reminiscent of the Port Orford Cedar battens that form the building’s Grand Gallery Walk.

On the north property line, there will be a hedgerow of arbor vitae to create visual screening between the building and our neighbors to the north.

The east and north sides of the Gillian Theatre will feature plantings of Boston ivy—the same ivy that grows in Chicago’s famous Wrigley Field. Ivy will also appear on the west and north exterior walls of the volume of the building that contains the Alexandra C. and John D. Nichols Theatre. As it grows to cover the plaster walls, it will help the building further blend into the surrounding parks.

The west side of the building, outside the Green Family Rehearsal Room, will feature a planted area of Japanese forest grasses. 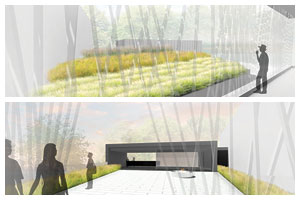 Additionally, the Stephanie and Bill Sick Rooftop Terrace will be flanked by a pair of small rooftop gardens. The plantings for these gardens and for the Green Roof Garden that is visible from the Grand Gallery Walk were selected with input from our friends at the Chicago Botanic Garden who offered advice as to what would grow and look the best in our local climate. The Botanic Garden also helped us select the arbor vitae for the hedge row.

The front of the building will feature a flagstone rain garden, adjacent to a limestone bench.The roof of the Atrium features scuppers, or small spouts, for collected rainwater to cascade down into the limestone slabs that create the flagstone garden. From there, this water will be drawn into the Village’s stormwater collection system.

The sidewalk outside of the building will be widened by 2’ to create a more spacious entryway and will be patterned similar to the Village’s downtown sidewalk pattern: red clay bricks bordered by light-colored stone pavers.

The final component of the landscaping design, as part of the entry to the building, is the stair/ramp (or “stramp” as it’s called by the design team), which will elegantly allow patrons to access the new theatre building and will provide an easy way for patrons with mobility needs to enter the facility.

Taken together, the landscaping as designed by Coen + Partners with Studio Gang will truly create a “Theatre in a Park.”