One of the most anticipated moments in the construction of Writers Theatre’s new home has been the installation of the Grand Gallery Walk – a wood screen hung in tension enclosing an exterior walkway that surrounds and overlooks the main lobby. A defining architectural feature of the new theatre center, the wood screen is a unique feat of engineering designed by Studio Gang Architects in concert with our structural engineers, Halvorson and Partners, and renowned engineer Peter Heppel. Mr. Heppel specializes in innovative structures in the fields of architecture, marine engineering (America’s Cup sailboats), and aerospace engineering, and he lent his expertise to the Writers Theatre project to engineer and achieve the vision of the wood screen structure.

The Grand Gallery Walk as a design idea was first developed at the end of our concept design phase with Studio Gang and Halvorson and Partners. At the time, it was illustrated in a sketch and a rough model. 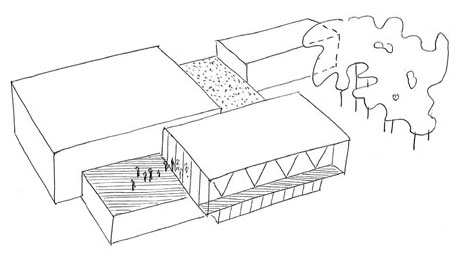 As the design was further refined, the team adopted a fresh approach to a very common material.  Traditionally, wood is used as a structural material in compression (e.g., a log cabin). However, for Writers Theatre, the inverse condition was developed: the wood screen’s cross-pieces, called “battens,” would be hung from the top truss in tension, and the bottom truss (and Grand Gallery Walk itself) would be supported entirely by these battens and from the wood structure above.

In this sketch, you can see the main wooden structure of the lobby from which the wood screen trusses and battens are hung: 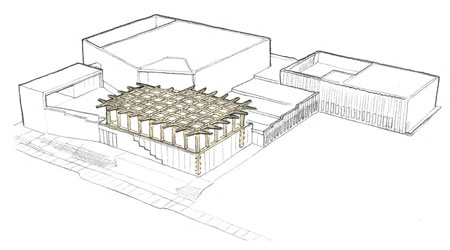 And now with the Grand Gallery Walk and roof hung from the main lobby structure: Together with Halvorson and Partners, Peter Heppel and the team developed a set of structural guidelines to arrive at the final batten layout, which ultimately makes visible the very structural integrity that underlies it, as shown here: Ultimately, the wood screen design included both an inner and outer layer of wood battens, as shown in this extraction from the architectural drawings (left).

Additionally, to allow the wood screen to fully engage in tension, the bottom of the 16 foot long wood battens (which are very slender – only 2 inches by 3 inches wide) would be connected to the bottom truss using a joint developed by Peter Heppel that the team named “the catspaw,” in which the batten is slipped into place and is not secured using bolts or metal plates. The design team made a miniature mockup of the catspaw to illustrate how it would work: 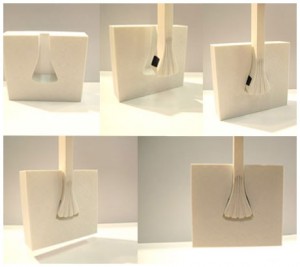 As they designed the layout of the wood screen, Studio Gang and Peter Heppel were also researching various wood types to find the perfect wood for the Grand Gallery Walk. Ultimately, they chose Port Orford Cedar, which is primarily grown in a small area in Oregon and California, and is a preferred wood for making arrow shafts because of the straightness of its grain. It was chosen because it is light, yet very strong and rot-resistant, all characteristics that are important to its use for Writers Theatre. Because the unique engineering of the wood screen had never before been attempted, one of the first tasks when construction started last fall was for the timber framing subcontractor, Trillium Dell Timberworks, to build a mockup of a section of the wood screen for structural testing.

In September 2014, several members of the Writers Theatre and Studio Gang teams visited Trillium’s farm and workshop in Knoxville, IL, to see the mockup and witness the testing. A 10-foot-wide section of the wood screen (which is 16 feet tall) was fabricated and hung within a steel frame for the structural tests. The bottom of the wood screen was bolted down to the steel to hold it in place for testing, where you can also see the actual catspaw connection. The mockup was very successful – it was tested to four times its design load with the wood screen only moving hundredths of an inch. In fact, the test was ended because Trillium Dell was concerned that the metal frame the wood screen was temporarily rigged to would break before the wood itself failed.

Following the successful test, Trillium Dell began making the trusses (the longest being over 80 feet long) and catspaw battens (over 250 total!). When they were nearing completion of the fabrication, the design team and Writers Theatre visited Trillium Dell again in February 2015 to look at the finished work and finalize details.  While we were there, we got to watch the catspaws being made.

First, slits are cut in the end of one of the battens and it is put in a steam box for two hours to allow the wood to soak up moisture and become pliable: Then wedges, also made out of Port Orford Cedar, are covered in glue and hammered into the slits, which creates the look of the catspaw: Finally, the catspaws are allowed to dry and then they are sanded to create the finished batten: In May 2015, the moment we’d all been waiting for arrived – the installation of the wood screen by Trillium Dell: The trusses were lifted into place by a crane and attached to the main wooden lobby structure. Then the bottom trusses were temporarily hung and the wooden battens were installed.

Finally, once both the inner and outer rows of battens were installed, the temporary bracing was removed, and the wood screen was hung in tension! Designing and building the wood screen and Grand Gallery Walk has been very exciting for all of us at Writers Theatre – we can’t wait to share it with you in person!