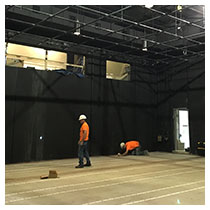 The Gillian Theatre under construction, as of September 29, 2015.

In working with Studio Gang Architects (SGA), Artistic Director Michael Halberstam and WT’s key artists and production staff wanted our flexible venue, the Gillian Theatre, to be a conversation between the old Woman’s Library Club performance space and the Books on Vernon performance space. The resulting design is a thrillingly intimate and flexible venue. It is large enough to hold up to 99 seats and has healthy vertical space for sets and lighting, but the room remains a neutral black box space, where the needs of the script and the vision of the production can dictate the seating configuration. Like our original home at Books on Vernon, the stage space is customizable based on the scenic design of each production, and seating can be arranged in multiple different setups, including thrust, alley, proscenium, or in-the-round. Halberstam, and WT’s production team led by Adam Friedland, innovated a further unusual feature — the interior walls of the theatre can be moved to bring the space to a smaller size, allowing for the possibility of the venue to be scaled for a smaller audience of only 50 seats, just like the original space at Books on Vernon. 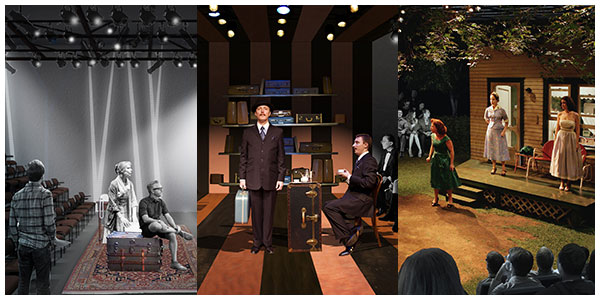 The Gillian Theatre accommodates a variety of performance configurations.

Additionally, the audiences’ journey of getting to the Gillian Theatre is reminiscent of patrons entering through Books on Vernon and travelling into the world of the play created in the back room of the bookstore.  From the north side of the Litowitz Atrium, those headed for a show in the Gillian Theatre will proceed down a shelf-lined “Bookstore” corridor—an homage to our roots at Books on Vernon. Along the way, patrons may peruse a display that pays tribute to the Theatre’s history. 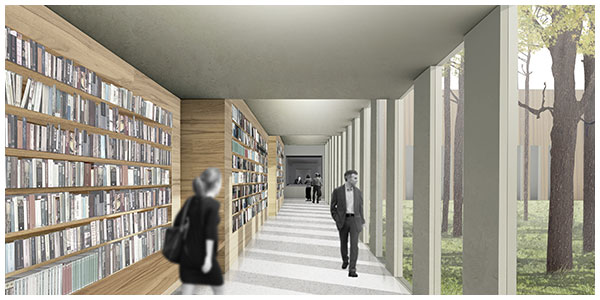 Bookstore Corridor connecting the Litowitz Atrium and the Gillian Theatre.