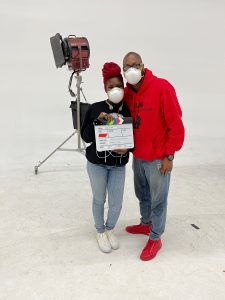 Bobby Kennedy (BK): Reggie, where did the idea for the play come from?

Reginald Edmund (RE): I was at this point in my life where I was struggling to find work, and I had to resort to working as a rideshare driver. It seemed like a great idea at the time. It allowed me to make my own hours and I thought it would allow me to sit down and write and pay my rent and all that other good stuff. But it quickly became kind of a trap. I was owing money on the car I was renting, I was working hellish hours, there were strains on relationships, and my mind was going to some dark places. As I was doing this, I would post funny observations on Facebook and people started looking forward to reading about my encounters. When Black Lives, Black Words was jumping into producing our first online season—called the Plays for the People series—I decided I really wanted to explore the experience and the pain and the comedy inside it.

BK: What appealed to you both about a play for one actor?

RE: I’ve always been drawn to the idea of a monologue play. It’s an exciting challenge, not just as a writer but also for an actor. It is you relying on your skill at storytelling and your ability to speak your truth and there’s nobody else there to come save you. For me, that fit into this whole narrative the character of Marcus was experiencing. He’s alone in that car and there’s nobody there for him to rely on for sanity. I wanted to have an actor dwell inside of that loneliness and have an audience go on that journey as well.

Simeilia Hodge-Dallaway (SHD): As Reggie so clearly articulated, it really benefited the story. You’re able to really sit with one character and go through all the emotions we all go through on a daily basis. You’re able to follow that psychological thread from start to finish and recognize we’re complex beings. Especially now during COVID, we also know that’s the experience many people are having right now, unable to see their loved ones. You are confined to your home and therefore forced to sit in all those emotional states you feel from the moment you wake up to the moment you go to sleep.

RE: I’ve been a massive fan of Kamal for a long time. I think he’s an incredibly versatile and smart actor. He’s someone I know will always push himself as far and hard as he can. It was really exciting to work with someone who I knew would understand the narrative journey of the character and would go the distance with it. SHD: I didn’t know Kamal. Reggie brought him to my attention as a possible Marcus and for me what sealed the deal was that the story really resonated with him. He read it and said “I can relate to this, it needs to be told.” His passion for the play from the onset was huge. He was calling us, saying “I need to be in this play.” It was really important to me to have someone who was captivating and completely relatable, somebody you want to see win. And Kamal is that.

BK: Black Lives, Black Words International Project produced a Zoom production of the play in June 2020. What was it like to rehearse, stage and perform the play entirely over Zoom?

SHD: I was encouraging of Reggie including his work in the Plays for the People series. When you’re a founder of an organization that aims to nurture talent, sometimes what ends up happening is you end up sacrificing your own work, your artistic endeavors. Reggie is a writer, first and foremost, and it was important to me to have his voice included. At first, working on Zoom was really exciting. It’s a challenge and I never shy away from a challenge. There was also something rebellious about not letting COVID stop us from creating art. When we started to block the play it became more challenging. Kamal was so generous with showing us his home through the computer, but it’s not the same as being able to see a space and physically work with an actor. It required a lot of trust and patience—”do you have space behind the sofa? How much space do you have behind the sofa?” We also didn’t have a lot of time, it was done very quickly. The great thing about it though was I’m already the audience, I can already see what they’re going to see. There’s going to be no surprises. It was exciting to find that hybrid between theatre and cinema. 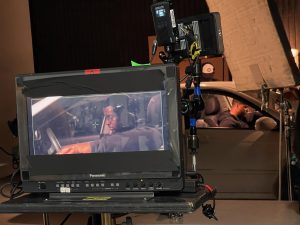 BK: In reimagining Ride Share for this co-produced film with Writers Theatre, what parts of the story are you getting to explore and portray differently than you were able to over Zoom?

SHD: I’ve loved both processes, but I’ve really enjoyed working with a Director of Photography. How do you keep the theatricality of it while translating it to film? I’ll be curious to hear from audiences what they think. But it’s been really important for me to find those theatrical moments, those spotlight moments, those moments of us being a voyeur and watching this character and his story unfold. Reggie has created this world that merges reality and the supernatural. I wanted to play with this idea of it being a thriller. For me it was really a privilege to get to do this a second time. Not many people get that opportunity. My first reaction was, if we’re going to do it again, we’re going to do it differently, we’re going to elevate it. There’s definitely going to be some real interesting and evolved moments for those who saw the previous version. Let’s just say that Kamal’s apartment is now a film studio, and that’s definitely become my playground. I’ve thoroughly enjoyed developing the script and getting to take what is written and reimagine how that is shaped for film.