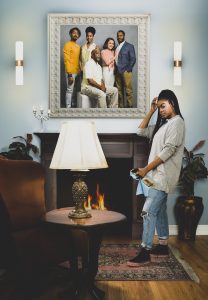 I first saw Stick Fly in 2015 at the Windy City Playhouse in a production directed by Chuck Smith and featuring Writers Theatre’s former Artistic Assistant, Tyrone Phillips. I was incredibly moved, excited, exhilarated and inspired by the bravura of the writing. I had known of Lydia R. Diamond, the playwright, but I am ashamed to say I was not familiar with her writing. It was my loss, and as it turns out it was your loss too, because I am late in bringing her work to you. I knew I had to share her work with WT audiences immediately and we programmed her play Smart People, which had just enjoyed a successful New York staging. The play was highly successful both critically and with audiences at Writers Theatre. She left us all eager for more.

When Stick Fly premiered at Congo Square theatre in 2006 in Chicago, Chris Jones proclaimed “there is no doubt that Lydia is a major talent” in the Chicago Tribune. Upon its subsequent transfer to Broadway in 2011, Terry Teachout wrote in The Wall Street Journal that the play was “a must see. Fascinating. Arrestingly fresh.”

Lydia writes about race and class in a deeply sophisticated but also generous and at the same time provocative way. Her generosity empowers audiences to make better choices and her provocation indicts us for our mistakes while opening doors for us to make amends. This is a rare gift.

If you have ever had the pleasure of watching Lydia engage in conversation, she frequently draws attention to the fact that she likes to write about African Americans in paradigms that she does not frequently (or ever) see either on stage or in other forms of narrative storytelling. In Stick Fly, she writes about an affluent black family with a home on Martha’s Vineyard. When brothers Kent and Flip bring their respective partners—one white, one of color, one affluent, one an academic with fewer resources and complex feelings about the affluence she encounters—home to meet the parents for the first time, things get complicated quickly. Race of course stands as an integral part of the narrative because people of color are forced to engage with the conversation in their everyday lives whether they chose to or not. White people without integral friends of color can engage in conversations about race when we want to. People of color have no choice because of the prolific nature of racism. But because Lydia is a brilliant playwright, she also focuses thematically on a wide spectrum of ideas and the play raises conversations about class, fidelity, parental responsibility, sibling rivalry and familial tension. 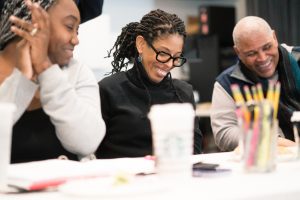 The play is at times difficult, hilarious and always beautifully written. Lydia’s facility for writing dialogue that elevates her audiences brings them up to her own level of brilliance and dazzling intellect while offering provocative and stirring storytelling has made her a perfect playwright for Writers Theatre to engage with. We are very fortunate to be staging our second production of her work and we are over the moon that she has accepted a commission to write an original play specially for us.

It is always a great pleasure to welcome Ron OJ Parson to Writers Theatre. He has staged some of our most successful and beautiful productions in the past 10 years or so, including creating our outreach program with playwright Yolanda Androzzo The MLK Project: The Fight for Civil Rights as well as scintillating productions of John Henry Redwood’s The Old Settler, Harold Pinter’s The Caretaker, Eugene Lee’s East Texas Hot Links and August Wilson’s Ma Rainey’s Black Bottom. He has assembled a spectacular cast and design team including many favorite artists returning to the company and you can read more about them in the pages of this magazine. Ron is truly one of the nation’s great directors. He has developed a well justified reputation for visceral stagings that take the audience by the hand gently and then run gleefully into the dramatic fray with flair, craft and heart and he has a veritable gift for drawing out an astonishing depth of uncompromising emotional truth from his cast and design teams.

In short, you are in for a superb night at the theatre. This play and this team of artists embodies for me why we do what we do—lean forward and engage.