Thank you so much for joining us for the first production of our 2019/20 season.

Back in the dark ages, before the internet and iPods and digital downloads, I used to scour the papers for news of album release dates. The best way to learn the dates was to call Tower Records and then call relentlessly on release day. Into the Woods was no exception. I was obsessive about my Sony Walkman and generally invested in a decent model. Much of my temporary work was in data entry and having access to WBEZ and music was essential to keeping me sane. During the daytime I worked as a temp and at night I would rehearse. I first purchased the cassette of the Into the Woods score, but wore it out fairly quickly and had to invest in an LP version soon thereafter. I listened to Into the Woods non-stop and learned all the lyrics, obsessing about the songs. Eventually I plucked up my courage and wrote to Mr. Sondheim, telling him what a difference he’d made to my life. He wrote back a lovely brief note telling me that my letter had come at just the right time. 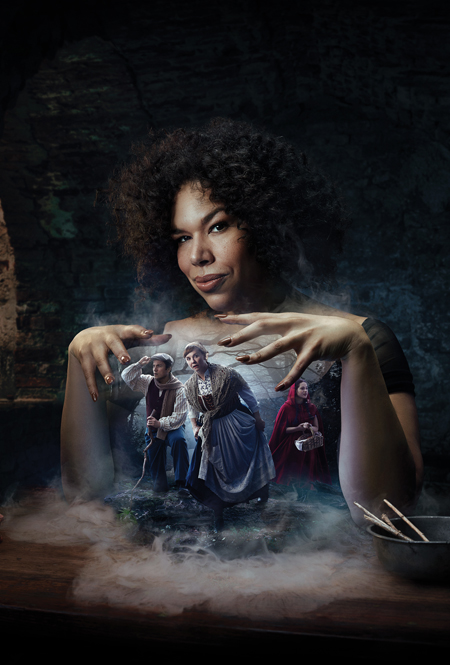 So why Into the Woods here at Writers Theatre? Why now? For me, at least, the answer lakdfajfkafajsakfajis simple and found in the lyrics of this wonderful musical’s most familiar song: “Careful the things you say, Children will listen!”

For as long as I have been reading, I have been obsessed by fairy stories; stories about magic and the ancient world’s various mythologies. As a child, I devoured stories of the Greek, Roman, Egyptian and Norse Gods and I read the Bible cover to cover. I still have a fondness for them all, and I am instantly intrigued by any movie or television show or novel that intelligently delves into this particular literary realm. (Phillip Pullman’s brilliant His Dark Materials trilogy took my breath away.) Although told in childish form, these stories are not entirely suitable for children. The Brothers Grimm and Hans Christian Anderson stories are particularly brutal affairs frequently ending with gory consequences for straying from paths that were clearly laid out by figures of authority. This, of course, reflected the morality and social milieu of the times in which they were crafted.

Needless to say, when Into the Woods entered into my life, I was transported. Here was a fresh look at the fairy tale genre from a thrillingly contemporary perspective. The first half of the play embraces tradition and brilliantly interweaves a series of well-known stories, while introducing a brand-new one about a baker and his wife and their attempt to lift a curse placed on their family by a wicked witch. It’s delightful and frequently hilarious, and of course it has a wonderfully happy ending. But there is a brutality and a hard truth that underlines the structure of the first half, and when the narrator announces “to be continued” right before intermission, the ground has been laid for an even richer and more complex piece of storytelling. And this is where both the book and the score really take flight. In the second act we are asked to question what it really means to live happily ever after. We are confronted with no-win situations. We take a look at the real-life progression of relationships that might not end in complete happiness and might even face the challenge of considerable loss. Most importantly we are asked to think about the impact that the narratives that surround us have on the next generation. We are especially asked to consider the consequences of our own actions when we pursue ‘happily ever after’ to the detriment of everything around us. We are asked to take responsibility for ALL of our choices in life and are encouraged to engage with the need to bridge the eternal generational divide. It’s worth pointing out that these are themes that will appear in a number of productions at Writers Theatre this season and, of course, mirror the national conversations that currently shape our lives. They are important conversations.

I can think of no better guide to lead this conversation than my friend and colleague Gary Griffin. I can also think of no better director for me to lean into as I return to acting after a 17-year hiatus. Gary has a gift for looking at musicals with a fresh and essential perspective. He looks at each staging as if it is a premiere and discovers the piece anew. I can’t overstate the importance of this perspective. Often, an iconic production (usually the premiere), sets up a series of choices that stick with subsequent productions and become inseparable from the piece itself. By looking at each staging with present and essential eyes, Gary makes the production he is working on feel fresh, relevant and necessary. His work with Sondheim has been revelatory to say the least. His Passion, Sunday in the Park with George, Road Show and his Pacific Overtures were informative not only to the nature of the pieces themselves but to me personally in terms of what I learned about myself through watching them. If you’ve seen Into the Woods before, then this will be like seeing it again for the first time. If it’s your first foray into the show, then you’ll always remember this one. Gary has assembled a remarkable team to transport us all into Sondheim and Lapine’s astonishing leap of imagination. We are all in wonderful hands.

So we humbly request, as many of you are already familiar, that you please, please, please, don’t sit back and relax. Do lean forward and engage. Take a walk with into this new season and as we go Into the Woods. You’ll be so much happier on the other side.

Thank you again for your patronage. It is truly a privilege to make theatre for you and we do not take this responsibility or trust lightly.