Dramaturgy, Education, Events
From Page to Stage series, season 13-14, The Old Man and The Old Moon

Our From Page to Stage series, now in its 9th year, once again collaborated with North Shore Libraries this fall on a variety of events designed to enhance and enrich appreciation of The Old Man and The Old Moon.

At the Wilmette Library, the event began with a viewing of PigPen Theatre Company’s TED Talk on Storytelling. Take a look!

Rives Collins, former president of the American Alliance for Theatre and Education, delighted everyone with an incredibly engaging presentation on storytelling. Here are some of the highlights…

“Storytelling is not new but suddenly red hot,” Collins said, describing the recent resurgence of this ancient art form, which can be seen in everything from the way companies are using stories to market products to the growing solo storytelling performance circuit in Chicago.

A noted Northwestern University Professor of Storytelling, Collins described The Old Man and The Old Moon as a combination of “innovation and great storytelling.” Rather than asking audiences to just watch and listen from the outside of the story, PigPen asks, ‘What if we welcome them in?'” He points out that in a world of million-dollar effects, the items used in this show are very basic – from flashlights to swaths of fabric, to household objects turned into puppets. The audience recognizes the simplicity of the objects and tools they see, and are invited to imagine the complexity of the world in which the story happens.

Collins mentioned how good children, playing pretend, are at using their imaginations to turn a stick into a sword or a tree into a dragon. As researcher of early childhood education Vivian Gussin Paley noted, there are two main elements to children’s pretend play: imagination and transformation. Children are serious and fully committed to the scenarios they create using their imaginations.

Collins described the experience of being invited to use one’s imagination as an adult as incredibly liberating. We’re invited to look beyond our actual, real surroundings and to participate in giving what we see meaning and shape. Myths, fables, and fairy tales offer us an opportunity to set aside our healthy skepticism and fall into stories that are wildly different from our real-world experiences, and yet illuminate the same truths. 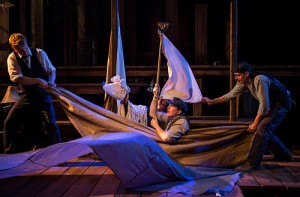 The show, he said, brought this question to mind: what’s the truest way to represent something on stage? Since movies can offer photographic depictions of the world, how might the stage offer something else? PigPen Theatre Co., he says, is dedicated to telling stories by finding the essence of the world’s players and creating a truth that’s “more compelling than cinematic accuracy.” For example, in the show, the performers transform an old jug and mop into an extraordinarily lovable dog, who we love not because it looks just like a dog, but because its behavior captures the essential qualities of playfulness and loyalty that we associate with dogs. Rives notes that PigPen doesn’t pretend it’s realistic, but is “going beyond realism to help us see truth.”

Storytelling exists across time and place in all cultures around the world. Joseph Campbell, the prominent scholar of comparative mythology and religion, extensively studied the stories of the world and observed many patterns. In particular, there was a basic story structure he observed in all cultures, which he called the monomyth or hero’s journey. Rives relayed the basic elements of this story and gave several examples from pop culture.

He also noted that one of the many reasons this structure is repeated so often is that it’s psychologically reassuring and satisfying. He briefly mentioned that recent neuroscience research reveals that experiencing stories activates certain brain chemistry, such as triggering cortisol (related to stress or fear) and subsequently oxytocin, serotonin, and dopamine (resulting in a feeling of connection or reward). Although storytelling has such a long history, we’ve only recently found new language and technology to articulate and reveal its effects.

In the video above, PigPen mentions that with their performances they are “hoping to share the creative spark that’s given us so much happiness.” We invite you to experience this creative spark at a performance of The Old Man and The Old Moon.