Reflecting on the 2009 Tour of The MLK Project

This week we closed the 2009 Tour of The MLK Project and we are thrilled to say that in the past three years we have toured this production to over 75 schools, reaching more than 20,000 students!

We would like to share some of the student and teacher responses to the 2009 Tour as those are the best indicators of our success: 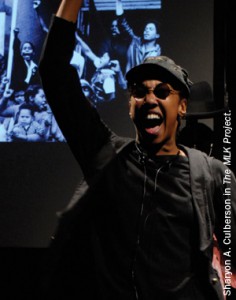 “A part that stood out to us was when the lady told the kid that he wasn’t good enough to be a doctor. You showed us that you could be whatever you want and nobody can tell you what you should or shouldn’t be.”

“I liked the fact that even though the events that were acted out happened years ago the presenter was thorough and I thought she was there and I felt like I was there!”–Student, Goodlow Elementary

“The combination of story plus the visuals really grabbed my students’ attention, particularly the story of Emmett Till. They were fighting over who got to check out a great book I have on Emmett Till. I now have a waiting list!”

“The students were able to see photographs of topics they discussed in class. It gave them a student view of the topic, through the actor. The students could identify with the main character who was frustrated about doing research, yet discovered the benefit.”

We’ll see you next year! If you are interested in bringing The MLK Project to your school in 2010 contact me, the Interim Director of Education, Nicole Gilman at 847-441-6840.