A NOTE FROM PIGPEN THEATRE CO. 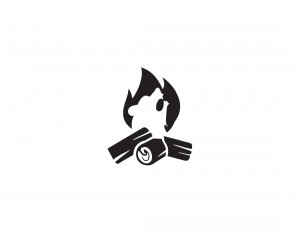 Dearest Reader,
It’s hard to believe that it’s been more than three years since we last came to Writers Theatre to share a story with you. Our Chicago debut came in the form of The Old Man and The Old Moon, which played in 2013—the final season of Writers Theatre’s previous Tudor Court venue in the Woman’s Library Club building. Now we have the great privilege of being back in the first full season in their beautiful new home. We find ourselves in a new building with a new story to tell. Today we ask you to help us explore this uncharted territory, much like the characters do in The Hunter and The Bear. These songs. This story. You all are the first audiences hearing it and this is the first time we are telling it. Unlike Old Man—which had smoothed itself over the course of regional workshops, performances, and a commercial Off-Broadway run before coming to Chicago—Hunter is vastly undiscovered. And that excites us like nothing else.

The idea for the story came nearly a decade ago. We had just met. A group of seven freshman acting students at Carnegie Mellon School of Drama. We wanted to put together a 15-minute show for our friends and teachers as a part of the school’s Playground festival. We used a bit of what we were learning in school (storytelling exercises and viewpoints exploration) and some of what we had lying around in our dorm rooms (guitars, bed sheets, flashlights) to write a ghost story about a man named Tobias who was hunting the bear who killed his son. It was silly, it was scary, it was sad…it wasn’t all that good…but people liked it! So we kept doing it. Each year we would write and perform a new story together. We wrote a tall tale about a carpenter trying to find his daughter’s wedding (The Mountain Song), we wrote a fairy tale about a young boy searching for the cure to his mother’s mysterious illness (The Nightmare Story), and we wrote a sea-shanty about an old man who abandons his duties caring for the moon to find his missing wife (The Old Man and The Old Moon). Those stories found an audience far beyond our university walls. Those audiences, in turn, helped us grow—as a theater company, as a band, as artists, and as people. We spent years travelling the country singing our songs, building our shows, learning new instruments, refining our craft, writing new stories, meeting our heroes. But all the while, we had Tobias on our minds.

In our plays, we tend to write about characters who are in search of one another across a great divide. In our lives, we were experiencing that divide first hand, feeling that longing for the first time. We were on the road, away from our friends and family, for months at a time. As that time went on, we started experiencing things we had only accessed through the folklore we were emulating. The death of a family member. The death of a friend. We were growing up. We were settling down. We were trying to start a company. And we were constantly being reminded of Tobias—and what happened to his son Elliot. We were having new ideas for their story but we weren’t ready to share them, even with each other, right away. We had something to say, but we weren’t quite sure what it was. So we scribbled in our notebooks. We hummed melodies and lyrics into our phones and laptops. We wrote a whole album of new music, released it, and toured it. We made a short film. We wrote a draft of a children’s book. We continued to perform Old Man. Then one day we were given an opportunity to write a brand new play. One of us suggested we go back and rewrite the story of Tobias—maybe call it The Hunter and The Bear—and we all said, “Yes, absolutely.”

So here we are! Trying something new. For those of you who’ve seen some of our previous shows, you might notice some differences. In doing research for this play we became fascinated with the history of the Pacific Northwest and how it reflects the human need to manipulate and control our surroundings. What separates the natural from the man-made? For how long can you trust your own experience without considering the experience of others? Who is in the right and who is not? And for extra credit: Who haunts ghosts? The answers to these seemingly simple questions become less obvious when you weigh the contradicting principles of fate and responsibility. And so, much like the men in the show, we were invigorated to explore this spacious unknown with every tool in our toolkit. The result was a slight change in tone. Much like the forest’s ability to seem infinite while also feeling claustrophobic, the sound of the show became more electrified while retaining its acoustic roots, the shadow screens and puppetry became more malleable while simultaneously bearing greater significance, and the stories within the story became more personal. We won’t say too much more—because we’d really love to hear from you first!

Find us after the show in the lobby, or online on Twitter/Facebook/Instagram @PigPenTheatreCo, and tell us what you think. With any luck, this story will continue to change and grow throughout the years. As long as it’s still silly, scary, sad … and maybe a little bit better than the last time we told it … we’ll keep doing it.