Tim: How do we get to the bottom of wanting?… I want quiet. In my mind. The kind of quiet that can’t be interrupted by wanting.

In Director Keira Fromm’s First Rehearsal speech, she spoke of the feeling of “want.” She explained that if she had the ability to do a search in the play for the word “want,” she could not even begin to guess how many times the word might pop up. The Last Match is about so many things. That is part of the genius of Anna Ziegler’s script – there seems to an access point for everyone. On a basic level, this play is about tennis. It is also about failure, and it is about winning. It is about love, and it is about legacy. For me, this play is also about dreams, and the very real fear that so many of us feel at some point in our lives: “what if I am not enough”? At the root of the play for Keira, this play is about wanting – that basic, all-consuming human desire that we all feel on multiple levels.

It is hard to believe that Keira shared this speech a week and a half ago, and we almost have a rough staging of the full play. For those who are less familiar with the story, Ziegler’s play follows two tennis players – American Star Tim (Luigi Sottile) and Russian Phenomenon Sergei (Christopher Sheard) as they battle it out in the US Open Semi Finals. Interspersed throughout the game are memories involving the players’ romantic partners: Tim’s wife, Mallory (Kayla Carter), and Sergei’s girlfriend, Galina (Heather Chrisler). Ziegler packs quite a bit into her fast-paced 90-minute piece, and we have had a blast in the room bringing the story to life.

This is my first time Assistant Directing at Writers Theatre, but I have had the pleasure of collaborating with Keira on multiple occasions. I always marvel at her ability to work with actors in building a relationship on stage. I have had a front row seat in many rehearsal rooms, watching her lead the actors through the process of unpacking those intimate complexities. The Last Match is no different, and I won’t give anything away, but I will say the story features two relationships that have had their fair share of troubles.

As I write this blog post, we are staging one of the play’s many flashbacks scenes. This particular memory features Tim’s first attempt to ask out Mallory, and the impressive strength she maintains as she goes toe to toe with the charming young tennis star. The scene is light-hearted and humorous, offering a fun window into how this future marriage began. As I watch the actors play and discover, my mind can’t help but wander back to this idea of “want.” What are we willing to do to get what we want, and at what cost?

At this point in the play, audiences will already have caught a glimpse at the many obstacles this marriage has faced on the journey to the happiness they want. They will have seen how much Tim wants to win, and how hard Sergei has worked to defeat the American star because he wants the same thing. They will have seen how ambition and drive can inform our wants and make them explode. Ziegler offers a whole range of how “want” can manifest itself; however, for the briefest of moments, we get a classic romantic comedy moment: what does it look like to want to ask out the girl of your dreams, and be absolutely terrified.

That’s all for now, but stay tuned! I’ll share more once we get to tech. Hopefully by then of course you will have already secured your ticket, and are ready to share in the magic with us. 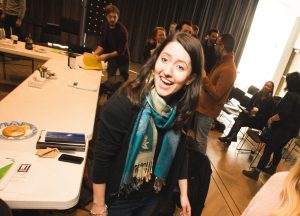