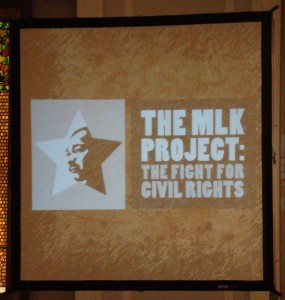 The MLK Project: The Fight For Civil Rights – 2014

To commemorate the legacy of Dr. Martin Luther King, Jr.,  Writers Theatre brings their production, The MLK Project: The Fight For Civil Rights, to the Chicago History Museum. This opening performance kicks off the eighth annual tour of the production in schools and community centers in the Chicagoland area from MLK Day through the end of February.

Freshman, Ireon Roach, a natural slam poet from Senn High School, started the program with a beautiful spoken word piece that she wrote herself, “Song of the King.” In commemoration of King, the audience, coming from all different cultures, ethnicities and ages joined in silent ritual during this performance. And after giving Ireon a welcoming standing ovation, the show began. 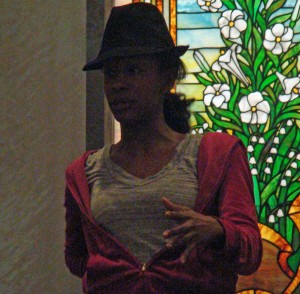 In brief, this one-woman show starring Caren Blackmore follows Alaya, a young high school girl, on her journey studying the Civil Rights Movement. Throughout the show, Caren transforms into eight different characters, many of whom played a role in major Civil Rights events of the 1950s and ‘60s. She portrays these characters and events by combining real interviews with both “unsung” and well-known figures, many of whom were Chicago-based Civil Rights activists, through poetry and hip hop. Alaya learns to turn her “anger into action” and that violence is not as powerful as her voice, which tied into Ireon’s “Song of the King.” 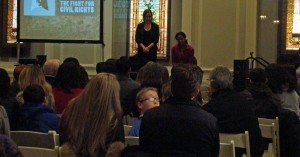 After the show, Writers Theatre staff and Caren engaged the audience in a discussion about Dr. King, his legacy, and whether his dream is still alive today. Dozens of voices were heard that morning, from a Civil Rights activist who witnessed the wave of silence after Dr. King died to a child whose grandfather had worked with Dr. King back in the 1960s. Memories were shared by older adults which sparked a sense of curiosity and inspiration in the children and young adults who attended the show.

The performance was not only beautiful, but it was very relatable to young adults familiar with being in high school and learning about the Civil Rights Movement in their history classes. We all know the story of MLK, but recognizing and experiencing a current sense of communal commitment to “keeping the dream alive” is what makes this program so powerful. 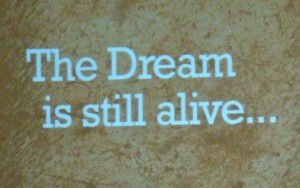 The MLK Project was written by Yolanda Androzzo an artist who conducted all of the interviews featured in the show. Director Jimmy McDermott worked with Caren (her second year in the role) through an intricate rehearsal process held each year. Sound and projections were designed by Mikhail Fiksel and Mike Tutaj.

Writers Theatre is now embarking on a six-week tour throughout Chicago and the surrounding areas in underserved schools and neighborhoods to bring audiences a chance to remember and celebrate Dr. Martin Luther King, Jr. and his continually unfolding dream.