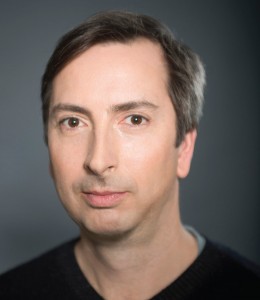 At the helm of The Dance of Death and making his Writers Theatre debut is director Henry Wishcamper. While relatively new to the Chicago theatre scene, Wishcamper brings with him almost a decade of experience with the works of Conor McPherson, whom he also considers a great friend.

Wishcamper grew up in Southern Maine and was enchanted by the theatre from a young age. The nearby town of South Paris, Maine was home to a school founded by Tony Montanero, perhaps America’s most accomplished mime. “Jugglers, storytellers, sword swallowers and more came from around the world to study with Tony,” recalls Wishcamper. “From the age of six, I knew them all and would beg my parents to drive me from town to town so I could watch them perform at fairs and community events.”

His childhood fascination with the performing arts led Wishcamper to enroll in Yale University’s undergraduate drama program, which placed a lot of emphasis on student-produced work. “The college had a fund that students could apply to that would provide them with a small amount of money to produce shows in the campus’ many theaters, dining halls, squash courts, courtyards, etc,” explains Wishcamper. “Most semesters the students at Yale would produce, direct, design and perform as many as 150 shows.”

During one failed attempt to earn a living as a professional actor post-graduation, Wishcamper remembered he “found it almost impossible to refrain from making directorial suggestions that were none of my business.” Instead, he spent his early career building on the self-producing ethos he had learned and honed while at Yale by producing and directing theatre all across the country. He co-founded a small theater in San Francisco, helped build a theater education program in Maine, and founded his own company, Katharsis, in New York City.

Several years later, Wishcamper felt a desire to learn more about the craft of  directing and spent almost a decade as an assistant director in New York. The young director worked on both hits and flops, assisting the likes of Anna D. Shapiro and John Tillinger, among others. “The combination of the apprenticeship model of being an assistant director and the DIY, find-a-project-you’re-passionate-about-and-make-it-happen aesthetic of my early years made a lot of sense for me personally.”

However, after almost ten years of being an assistant, Wishcamper was trying to figure out how to transition to directing his own work. Manhattan Theatre Club, where he had assisted on several shows, introduced him to Goodman Artistic Director Robert Falls, who was going to direct the American premiere of Conor McPherson’s Shining City at MTC. The two directors hit it off immediately, and Falls invited Wishcamper to participate more fully in the directing process and join him in daily conversations with McPherson, who he also got to know quite well. “Bob became a real mentor for me and advocate for my work,” reveals Wishcamper. “And Conor has been the writer that I have the deepest relationship with.”

Assisting on Shining City proved to be a breakthrough for Wishcamper. Falls soon asked him to direct Horton Foote’s Talking Pictures at the Goodman Theatre in January 2008, and McPherson picked him to direct the American Premiere of Port Authority (seen earlier this season at Writers Theatre’s Books On Vernon space in a production directed by William Brown) at Atlantic Theatre Company a few months later. More freelance directing work quickly followed on the heels of these two successes, and today Wishcamper has directed at the likes of The Old Globe, Lincoln Center Theater, Guthrie Theater, and Williamstown Theatre Festival.

Two summers ago, Goodman Theatre named him an Artistic Associate, prompting Wishcamper and his family (Costume Designer Jenny Mannis and their two children) to relocate to Chicago. “It feels wonderful to have an artistic and professional home after so many years as a freelance director,” confesses Wishcamper about Goodman. “It has also been great fun to get to know the Chicago theater scene. There is such variety in the work that is being created here. It’s incredibly refreshing for me.”

In his new adaptation of Strindberg’s classic, Wishcamper believes McPherson has found success with something that no other adaptor before him has accomplished. “He has brought out the dark comedy of the play. There are moments when I find myself shocked that I’m laughing given the intensity of what is happening on stage. His ability to create moments where absurdity collides with the naked truth of a situation makes for a really rich complex emotional tapestry.” The play is a clear precursor and influence on the works of Samuel Beckett, Harold Pinter and Edward Albee, something else that McPherson has heightened in his version. But at its core, Strindberg and McPherson are both interested in exploring the supernatural. Wishcamper finds that The Dance of Death explores some powerful questions about one’s ultimate fate: “Is there an afterlife? If so, does that afterlife offer us hope for something better? What if what comes next is even worse? What if this is in fact the afterlife and we are doomed to continue to experience this life eternally? How does one continue to persevere with this lack of knowledge about our experience? How can we not continue?”