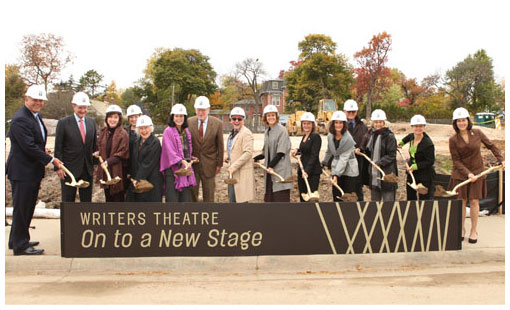 On Tuesday, October 21, 2014, Writers Theatre took a major step forward in the journey towards a permanent home with the Ceremonial Groundbreaking on its new theatre center. This important and exciting milestone marks the official beginning of construction on the center by contractor W.E. O’Neil. 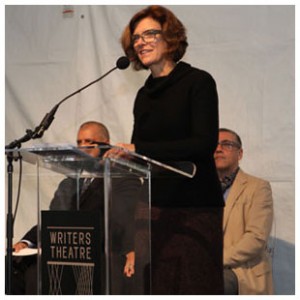 In attendance at the celebratory event on Wyman Green were WT Trustees, donors, artists, representatives of Studio Gang Architects including Founder and Design Principal Jeanne Gang, state and local government officials, and many other friends and supporters. Guests heard remarks from WT Board President Christopher S. Pfaff, Executive Director Kate Lipuma, Artistic Director Michael Halberstam, On to a New Stage Campaign Co-Chair Elaine Tinberg, and Jeanne Gang. It was announced during these statements that Writers Theatre has raised over $26.5 million toward the project’s base goal of $31 million. 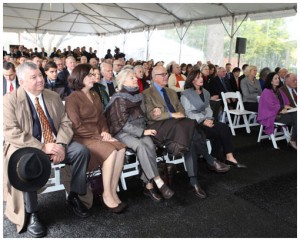 Following the speeches, a special original song, written for the occasion by Alan Schmuckler, was performed by Schmuckler, Stephen Schellhardt, and Casting Director and Producing Associate Kymberly Mellen. Attendees then moved to the construction site, where dirt from the site was ceremoniously turned by WT Board and staff leadership, Jeanne Gang, On to a New Stage Campaign Co-Chairs and committee members, and leadership donors to the Campaign. 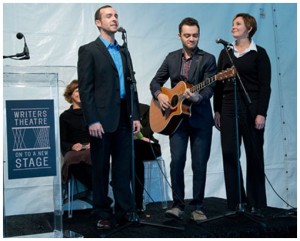 With the ground officially broken on the project, construction will now move forward expeditiously, with an expected Grand Opening to take place in early 2016. As the construction proceeds, we will continue to provide updates on our progress.