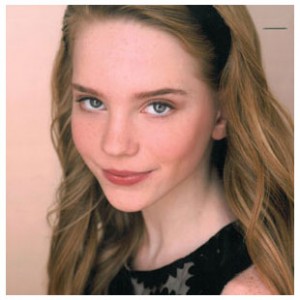 Sophie Thatcher discusses her passion for performance and preparation for the role of Anne Frank.

Literary Manager Bobby Kennedy: When did you first start acting? What are some of your favorite roles you’ve played so far?

Sophie Thatcher: When I was about four years old, I saw my older sister play the lead in her middle school musical. I knew I wanted to be on stage too, doing just what Emma was doing. Soon after that I played a munchkin in The Wizard of Oz (twice). I continued on with some community theater, acting classes, and vocal lessons. When I was in fifth grade I was in my first professional show, The Secret Garden at Light Opera Works, playing Mary Lennox. The Secret Garden is definitely one of my favorite shows that I’ve been in. The whole cast and director were so supportive and gracious to me. I couldn’t have asked for a better experience. Another one of my favorite shows would have to be Oliver! at Drury Lane. Not only did I get to play the sidekick of the phenomenal Heidi Kettenring, but I also made some very close friends in that show. Nearly all of the shows I’ve been in were musicals except for Our Town. I split the role of Rebecca Gibbs with my twin sister, Ellie. I played two shows, Ellie played two shows, and for the fifth show I went on for one act and Ellie went on for the other!

BK: How much did you know about Anne Frank before auditioning?

ST: My sister Ellie wrote a book report on Anne Frank in the third grade. Ellie drew some amazing portraits of Anne with her diary at the desk. That’s the first memory to pop in my head when I think about her. I’m sure I had known of her before the third grade, but that’s when I really started to figure out who she was. Before the audition I watched the documentary Anne Frank Remembered. The most memorable part of the film was at the very end. They showed the only surviving moving picture of Anne Frank. Although it was only a few seconds of her looking out a window, it was very powerful. I read through the play as well (all in one sitting; I just couldn’t put it down).

BK: Have you been doing anything to prepare for the start of rehearsals?

ST: Right after I heard I got the part of Anne Frank I went straight to reading her diary. I read the full version of her diary, which helped me understand her more. I learned more about her relationships with her family, and the regular girl stuff she thought about even in her difficult years in the annex. I’ve always been interested in this period of time. I’ve read all kinds of books on World War II and the Holocaust, and I’ve watched movies and documentaries about the period. 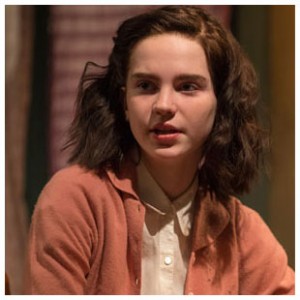 BK: What do you think will be the most exciting part of playing such an important historical figure? What will be most challenging about it?

ST: It’s incredibly exciting to play such a well-loved historical figure. I’ve always looked up to Anne Frank, because despite her horrible circumstances, you see a real, optimistic teenager. One challenge is everyone knows what Anne Frank looks like and she doesn’t look like me. And people might come in with certain assumptions about what Anne was like and they might see something a little different in this production.

BK: What are some of your other interests besides acting? Any favorite subjects at school?

ST: When I’m not in a show, I’m probably in my bedroom listening to music or writing a story, and I probably spend a little too much time at the mall with my friends on weekends. I started taking piano lessons recently and I’ve enjoyed learning classic rock and blues tunes. I take dance classes and voice lessons, and I love riding my bike everywhere (just not in the cold Chicago winter!). I just transferred to a new middle school in Evanston and my favorite subject so far would have to be Language Arts because I love reading and writing.