Peggy Rajski is a critically acclaimed filmmaker who has produced over a dozen feature films and garnered more than 40 major award nominations along the way. She made her directorial debut in 1994 with the Academy Award-winning short film Trevor. Director of Dramaturgy & New Work Bobby Kennedy learns the history of the inspiring story of Trevor. 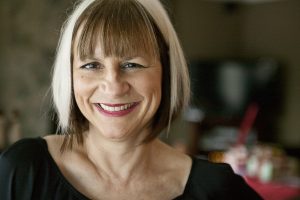 Bobby Kennedy: Can you tell us about where the idea for Trevor came from?

Peggy Rajski: Back one snowy night in December of 1993, I went and saw this one man show by James Lecesne that Eve Ensler had directed. The show was comprised of multiple character sketches and monologues written and performed by James. Trevor was one of those monologues and it took my breath away. I remember laughing and crying equally hard watching it because I so identified emotionally with that character. He made me remember moments I had as a teenager when someone said or did something that made me feel so ashamed, I felt like I wanted to die. People can cut you to the quick with one comment and it feels like it wipes out your whole existence. At the same time, there was such a beautiful blend of pure innocence, poignancy and humor, it made the character unforgettable. I immediately called my friend Randy Stone, a producer and casting director extraordinaire, and told him he had to come see the show. He was there the very next night and came out afterward looking like he had been crying. He said quite simply, “We have to make Trevor into a movie.” And that’s how the film was born.

BK: Were you looking to make a short film at that time or did the material just move you that much?

PR: Yes, it was all about the material. Both of our careers up till then were in long-form content. I’d been producing feature films for over a decade, and Randy had worked at least as long in television as well as film. Making short films wasn’t really on our radar, so Trevor was a complete aberration that way. But we both saw ourselves in that character—Randy as a gay cisgender man and me as a straight cisgender woman—and we just went “We have to do this. We have to get this out there.” We enlisted James and began to develop the screenplay with him. Over the course of doing that, I began to see the movie so clearly in my head, I couldn’t imagine giving it to anyone else to direct. Randy had seen some of the second unit stuff I’d shot on LITTLE MAN TATE and had been encouraging me to direct more. So when I brought up the idea, he went “That’s great!” That’s how I wound up directing it as well as co-producing. I’m incredibly proud that the film went on to be seen around the world, won lots of awards, led to the creation of The Trevor Project, and now is being adapted into a musical. Who’d have thought?

BK: How did you distribute the film?

PR: While we wanted Trevor to succeed first and foremost as a piece of entertainment—to move people in the same way it had moved us—I knew a distribution company that specialized in getting gay-themed films into the educational marketplace and was able to make a deal with them before we even shot the film. James told us that his initial impetus for writing the piece came after he heard a disturbing news report about the higher risk of suicide among gay and questioning youth–they‘re 4 times more likely to make an attempt on their lives than their straight peers. Randy and I were equally alarmed and knew we had a unique opportunity with a film like Trevor to reach kids in the classroom and help raise awareness about that issue. So we jumped on doing that. Once the film was completed, we began submitting it to film festivals around the world and it had a great run. It premiered at the Toronto Film Festival and went on to win awards at a lot of festivals including a Teddy for Best Gay Short at the Berlinale. Then we hit the mother lode. Randy submitted it for Academy Award consideration and we won the Oscar for Best Short Film in 1994. After that, a lot of other great opportunities opened up. Trevor wound up playing in theatres in the U.S. as part of a feature length compilation of gay-themed short films called BOYS LIFE, and I was able to make a deal for international TV and film distribution with Polygram, a great company I happened to be working with at the time producing Jodie Foster’s HOME FOR THE HOLDAYS. In fact, Randy was visiting us on location the day we found out we were nominated for the Oscar.

PR: Randy had a lot of great connections in TV. He knew the folks at HBO and they agreed to put Trevor in its own half hour slot—something that had never done before– IF we could find a suitable celebrity host. Randy then went to Ellen DeGeneres and she kindly agreed to host. It might be hard to remember now, but 1998 was the year that Ellen came out – and it was a very big deal. She was on the cover of TIME magazine with the ‘Yup I’m gay’ headline, and you couldn’t get more high profile than that.

When I knew the film was really and truly going to be on HBO and in a countless number of people’s homes, I suddenly had this realization there were also going to be a countless number of kids watching who might be feeling like Trevor. I couldn’t stand the thought that they might not have a safe place to turn for help. I did some research and found listings for two phone lines that were supposed to be open on the weekends to help LGBTQ+ youth in crisis. I called both of them and never got an answer. Though there were hundreds of regular suicide hotlines in the country, the degree of homophobia felt so high at the time, I didn’t trust that kids would get the support they needed. It was keeping me up at night. But then my producing side kicked in. Producing is all about problem solving, so I just went ‘Well, if there’s not a 24/7 hotline for gay kids in crisis, we’ll have to create one ourselves.’ And that’s where the idea of The Trevor Project came from. I called Randy and James and they jumped on board right away. We only had three months to pull it together before Trevor went on the air, but we did it. I was at the call center the night Trevor debuted on HBO, and the moment the film finished and our call line number came onscreen, the phones started ringing off the hook. Calls came in from every part of the country. It was one of the most powerful things I have ever experienced in my life. 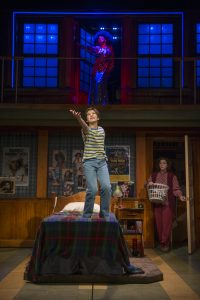 BK: What has your involvement with The Trevor Project been since then?

PR: The Trevor Project was built around my dining room table and luckily, it’s outgrown that. It remains one of the most pivotal achievements in Randy’s, James’ and my life. But in those early days, it was hard going. I served as the Executive Director for the first three years and let me tell you, trying to juggle making movies and launching a nonprofit startup ain’t easy. I’ve been with The Trevor Project every step of the way and continue to serve on its Board of Directors to this day. The dedication of everybody involved—the board, the staff, the hundreds of volunteers who work on our crisis services–never ceases to amaze me. I tell you, there’s some kind of magic to Trevor. It always seems to attract what it needs to keep it going and growing, and spreading its loving message far and wide.

BK: What excites you about the musical version of Trevor?

PR: Everything! I know the story couldn’t be in better or more caring hands. And I can’t help but feel a bit of Trevor magic going on here too. You’ve got a story that started on the stage and inspired an Oscar winning film that’s now being adapted to the stage as a musical. Clearly there’s something about this character and his story—its beautiful blend of heart and humor—that needs to be told and never grows old.