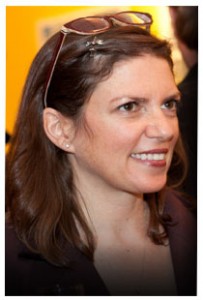 Director Kimberly Senior discussed with Literary Manager Bobby Kennedy her experience with the original diary and the unique features of this production of the play.

Bobby Kennedy: When Artistic Director Michael Halberstam first suggested The Diary of Anne Frank as a project for you, what was your response?

Kimberly Senior: I was thrilled! It’s a story we are all familiar with but the opportunity to tell the story in the intimate bookstore really excites me. Changing the scale at which the story is told can have a deep effect on the audience’s relationship to the story. I think that it will enable us to encounter the material in a new, and perhaps more resonant, way.

BK: What is your history with Anne’s diary? When did you first read it? What kind of effect did it have on you?

KS: I grew up in northern New Jersey in a Jewish home and attended weekly religious school. I am fortunate that my family wasn’t directly involved in the Holocaust; my father is Syrian and my mother was adopted so we are unclear about her heritage. So I grew up with an almost academic understanding of the events of the Second World War. I read Anne’s diary when I was 12, and I remember being struck by the human face that it put on the events of war. It quickly moved from the academic to the personal, and changed not only how I saw World War II but how I viewed history in general. It is tangentially perhaps why I got more deeply involved in theater and storytelling. Timelines, statistics, and facts weren’t resonating with me. I needed the personal story to understand greater global ramifications. So many stories that have been deeply personal for me to tell have been rooted in historic events or situated in these heightened historic circumstances.

BK: Why do you find it is so necessary to continue telling Anne’s story?

KS: See above! Also, we are reaching a time where there are fewer and fewer remaining survivors, and it’s important to keep these stories alive. I also think there is something really powerful in experiencing the play right there in the annex, with them. They didn’t know their fate while they were living there. For us to be able to step into that moment can give us greater context and understanding in our own lives.

BK: How did you approach casting the play? What were you looking for in an actor for these iconic roles?

KS: I was looking for the best actors for the roles! I couldn’t go from photographs and attempt to find lookalikes. I hope costumes can help me a bit there. I was looking for actors who use language to drive action, who are able to inhabit a space naturally. I am really driving the realism of the piece. So I hoped to find spontaneous actors who love living in the moment! I also wanted to build an ensemble of actors who could play and grow together over the months. Our cast is a combination of actors with whom I have worked many times (Sean Fortunato) and actors who are brand new to me (Sophie Thatcher).

BK: Is there a different approach you take when directing in a 60-seat space as opposed to a venue with hundreds of seats?

KS: Absolutely! The raise of an eyebrow, the adjusting of a sleeve–all of these tiny details are under the magnifying glass in a small space. There are infinite possibilities without having to worry about “does it read” in a larger space. Plus, the audience is given greater access to the inner life of the characters in such a small space.

BK: How are you and your design team intending to create the physical world of the annex in Amsterdam?

KS: We were fortunate enough to have access to original ground plans and we started there, attempting to fit the actual annex into the bookstore. We’ve obviously made some adjustments but those who are familiar with the annex or who have been to Amsterdam will recognize many details. We are also lucky to have so many extant photographs of the people and places. We are very research-driven in this process! I wanted to create a claustrophobic space where we could see the inhabitants attempt to create a makeshift home.

BK: What do you hope audiences will leave thinking about?

KS: The one spin we have on this planet. Our greater obligation to our humanity. Seeing the extraordinary in the ordinary. No one in this play set out to be a “hero,” yet we can’t deny their extraordinary heroism. ■