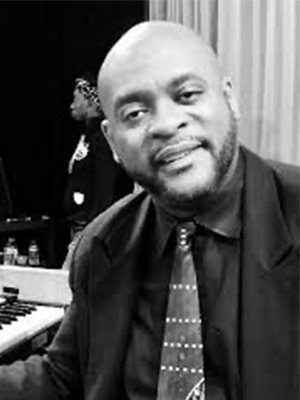 Frank Menzies
At Writers Theatre: Pearl's Rollin' With the Blues: A Night with Felicia P. Fields

Frank is the Director of Instrumental Music at the Westside Leadership Academy in Gary, Indiana. Mr. Menzies teaches Beginning Band, Marching Band, Concert Band, Jazz Band and all string classes. Under the leadership of the founder and Senior Director of the Westside Theater Guild Mark Spencer, M.Ed., he was recently cast as the father Jacob in Joseph and the Amazing Technicolor Dreamcoat. Mr. Menzies attended Howard University, Vandercook College of Music, Governor's State University, Chicago State University and the American College of Education. He holds a BA in Fine Arts and an M.Ed. in Educational Leadership. He has performed on multiple airings with Roxanne Stevenson's R.S.V.P., including Windy City Live. He has recorded with John Faddis, Ron Haynes, Michael Houston and many others. Frank has toured China, Canada, the U.S. and recently as Music Director for vocalist Tina Brown in Italy, Spain, France and Switzerland. He was an Illinois All-State presenter in 2004, as well as a Golden Apple nominee that same year. In 2005, Frank was a Suave Award nominee, and was conferred an Honorary Commission from the U.S. Congressional Leadership Council. He began his Doctoral studies for Education Leadership while teaching as an Adjunct Lecturer at Chicago State University in 2019. In addition, he is former Associate Conductor of the Chicago All-City Youth Orchestra and former Principal Conductor for the Chicago All-City Symphony Orchestra. He has maintained the position of Music Director for the Church of Jesus Christ in Harvey, Illinois for over 43 years. Mr. Menzies has performed as a musician for Oprah Winfrey's The Color Purple, the stage spectacular Dreamgirls and much more.