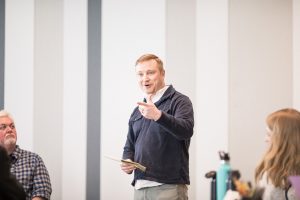 A father is forced to confront the impact his choices have had on his offspring.

I couldn’t be more excited to be the one to introduce you to A Number, Caryl Churchill’s staggeringly smart and deeply unsettling drama about a father and his son(s).

Writers Theatre prides itself on bringing the work of the finest playwrights in the English language to the North Shore, and we are long overdue to include Churchill in these ranks. A British writer of dazzling wit and formidable intelligence, she has been challenging, testing and rewriting the conventions of contemporary theatre for sixty years.

When she sat down to write A Number in the early 2000s, a debate was raging around the ethics of creating human embryos and the replication of sheep DNA. Now, as a new generation confronts the prospect of gene editing and designer babies, the necessity for scientists to focus on the potential real-world ramifications of their actions has never been more pronounced. Churchill anticipated all of this, not by setting her play in some academic laboratory, but by placing it in a living room with one specific family who is facing the lasting and terrible repercussions of having “played God.” 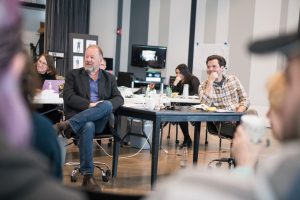 The DNA of A Number can be traced not only to the heady science fiction of The Twilight Zone and Black Mirror, but also to the complicated family dynamics of Eugene O’Neill and Arthur Miller. It offers a cerebral high combined with a devastating emotional wallop, all in an efficient and taut 65 minutes. In this play, a father is forced to confront the impact his choices have had on his offspring. Constructed like a particularly brutal science experiment, it forces us to ask the most fundamental questions imaginable about the things we pass on to our children.

Working on this play is necessarily going to take on an unusual personal resonance for me. Sometime in the next few days, I’m anticipating the birth of my first child. I’ll take leave to be there for those vital first few weeks, and then return to work in time to be present for much of the rehearsal process for A Number. Already, I’m haunted by the questions this play asks of me. What gifts and what struggles will I genetically pass on to my daughter? And, at the same time, how will I be shaping her development, not just in those times when I have a lesson I hope to impart, but in all those deeply human moments that pass in between?

Churchill offers us as an audience a stark and essential challenge, but she does it in a scintillating and compelling play that sparks the imagination and cuts to the marrow. Please, lean forward and engage. This play and this extraordinary production are what we have to pass on to you. 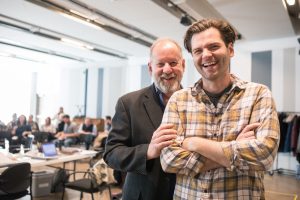