Welcome to the first production of our 2018/19 Season!

Director Lavina Jadhwani has been working with Writers Theatre for close to ten years now. When Director of New Work & Dramaturgy Bobby Kennedy first started with the company, he drew together a group of bright young artists to work with him on reviewing new script submissions (as you can imagine, a theatre called Writers Theatre receives an unwieldy number of new plays to peruse). Lavina was one of those artists. She has stayed in touch with the company through her tenure as artistic director of Rasaka Theatre Company, a tenacious and brave theatre dedicated to performing works with South Asian themes. When she went to DePaul Theatre School to study directing in their graduate program, she invited me to mentor a classroom project during which I learned as much from her as I hope she learned from me. 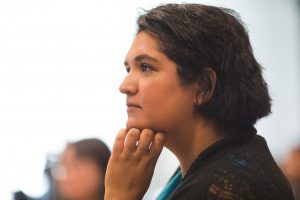 After her graduation we began conversations in earnest to bring a directing project to fruition. In a tangible way, Lavina has grown with the company, and her arrival as a director in our Nichols Theatre is a testament to her patience and her understanding of both our mission and the audience we serve—that is to say, you! In the meantime, she has also cultivated relationships with Asolo Repertory Theatre in Sarasota, Florida, the Oregon Shakespeare Festival and the Actors Theatre of Louisville, among many other regional giants.

When Lavina presented Vietgone as a text that she thought we should consider, and a play that she passionately wanted to realize, I had a number of questions. How would audiences respond to the rather prolific use of the word motherf*&ker throughout the play? Would the unconventional structure, which draws much from pop culture, appeal to our audiences? The writing was fresh and witty and punctuated by bursts of poetic insight and ultimately utterly engaging, but would Glencoe give it a chance? How should we address and answer these concerns?

Bobby was a fierce champion of the play, and of Lavina, and he encouraged me to greenlight a reading, which we staged this past December. We invited our subscribers to hear the piece and, in an unprecedented and immediate display of enthusiasm, we filled the house a few short hours after sending the invitation and were even forced to turn people away. The reading was riotously successful, and any questions about the subject matter were answered in the tide of enthusiasm articulated by the attendees.

Indeed, the play is both hilarious and touching, sentimental and organically truthful, surprising and accessible. It has played to great success in New York, at the Oregon Shakespeare Festival and at many regional companies, including American Conservatory Theater in San Francisco where it became the first play to extend in their beautiful new Strand Theater.

So, what should you be prepared for? You should be prepared to laugh; to be taken on a wild road trip; to embrace a deliciously theatrical storytelling vocabulary employing projections that pay homage to contemporary pop cultural iconography. Most of all, you should be prepared to lean forward and engage with a superb cast, a terrific script and a great design team under the guidance of a first-rate director. We will be taking you on a road trip between time zones, nations and the hearts and minds of Qui Nguyen’s wonderful creations in the classic Writers Theatre tradition. It’s a great way to launch our season.