Almost a year ago now, in anticipation of the live opening of The Last Match, I wrote the following as part of my State of the Art letter:

“In unprecedented times, I think it is good to return to basics and ask the foundational questions presented in The Last Match. The most profound political battles are waged in the home and in the heart. Anna Ziegler asks us to consider what it means to age gracefully, how we are to balance career with ambition, what really matters at the end of the day and ultimately whether or not the legacy of achievement is more important than the legacy of genuine and integral human connection. It’s 90 minutes of exhilarating dialogue, unabashed theatrical staging and a dive into some the most important themes and questions of human existence.” 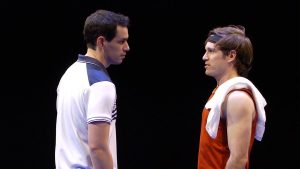 Pictured: Ryan Hallahan and Christopher Sheard in The Last Match.

My passion for the play has not changed and neither have my reasons for producing it. What has changed radically of course is the world around us. We are still in the midst of a pandemic—one that we had initial hopes might be gone by summer. We have been through a bruising Presidential election, massive civil unrest and an assault on the US Capitol that left us all shaken and profoundly disturbed, and questioning so much of what many thought our country to be. In a testament to the skill and prowess of the author, the play still holds and the questions remain relevant. 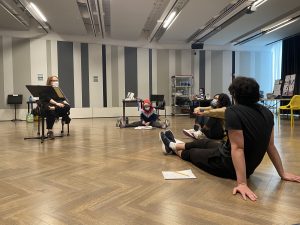 As the production took shape in the rehearsal room and in the theatre where director Keira Fromm, choreographer Steph Paul and their brilliant design team were adding the set, lights, costumes and sound, I realized that we were on the brink of launching something extraordinary and it was utterly devastating to think that all that beautiful work might be lost forever. So we immediately began plotting its return in some way, shape or form. We initially had hopes that we might be able to bring it to life in our beautiful Gillian Theatre as early as last June. As the fall approached, we hoped that perhaps early winter might offer us the opportunity to remount the piece.

Finally, it became clear that the pandemic was to continue much longer than we could have imagined and so we began plotting in earnest to preserve the production on camera this spring. 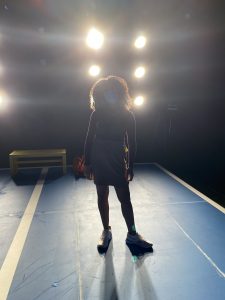 Pictured: Kayla Carter in rehearsal for The Last Match. Photo by Heather Chrisler.

We have gone to extraordinary lengths to bring this piece to you via streaming. As I type, actors are actually masked, COVID tested (3 times a week) and working in person in our rehearsal rooms in preparation for filming in a few weeks. We have a new actor, Ryan Hallahan, and a completely new medium through which to communicate. Keira, in harmony with HMS Media, is creating a production just for streaming. She is preserving the sense of the theatrical and maintaining much of the conception of the original production, but she is using the tools of film in order to tell the story specifically for the medium. It is not a movie of the piece. Anna’s play is inherently theatrical, but by using direct address to the camera and playing with light and sound and the tools of film (closeups, editing, multi-camera angles), we can bring you a unique evocation of what we’d hoped to deliver for you live without losing what made the production special. On the contrary, I think this is going to be even more special. The intimacy of playing for the camera allows the actors to draw you in with the power of their emotional convictions and the point of view of the director in shaping the camera choices brings you even deeper in Keira’s vision for the play. And of course, Anna’s beautiful words will still hold their power and can even be enjoyed on demand from the comfort of your living rooms.

So whereas we can safely all agree that we would be happier to be presenting this to you in person, rather than lamenting what we cannot change, we are making an amazing glass of lemonade out of a very potent lemon and we invite you to delve even more deeply into The Last Match.