Shouting From the Sidelines

The Black Women Playwrights That Broke Onto Broadway

Having a show reach this monumental milestone is a success and honor for any playwright; however, this play’s production was part of a particularly groundbreaking season. Alongside Stick Fly, two other plays penned by black women were running on Broadway: Katori Hall’s The Mountaintop opened on October 13th and Suzan-Lori Parks‘ reworked Porgy and Bess opened on January 12th, 2012. This historic moment was the first time in history there had been multiple black women with productions playing on Broadway stages. In fact, as of 2019, only twelve works written by black women have ever played New York’s famous theatre district. This small but illustrious list of plays and even smaller list of playwrights have broken onto the biggest stages in the world, but how did they make the difficult climb?

For some context, the earliest big theater in New York was the Theatre on Nassau Street, opened in 1750. After the American Revolution, theater owners and producers moved their companies (and the theatre district) from downtown to Midtown. Performances were divided along class lines: “opera was chiefly for the upper middle and upper classes, minstrel shows and melodramas for the middle class, variety shows in concert saloons for men of the working class and the slumming middle class.”[1] This was the start of the location we now know as Broadway, which would later give birth to the American musical. It wasn’t until the early 20th century that black performers were allowed onstage at all. The first show written by black men, the musical Shuffle Along, debuted in 1921, but it would be another 38 years before a work by an African American woman played in a Broadway theater.

The breakthrough was Lorraine Hansberry’s A Raisin in the Sun, which debuted on Broadway in 1959 and became an instant classic. A well-crafted family drama in the same stylistic vein as many of the white writers before her, Hansberry’s play, which centers on a black family in Chicago struggling with segregation and stunted class mobility, captivated audiences. Yet in the wake of Hansberry’s breakthrough show, no other black female playwrights were given the same opportunity to move their work onto Broadway for almost another 20 years. 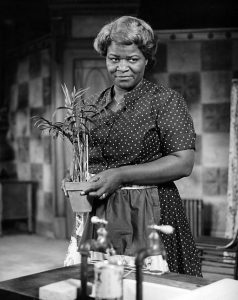 Claudia McNeil as Lena Younger from Lorraine Hansberry’s A Raisin in the Sun (1959). Photo courtesy of Wikipedia Commons.

However, just because work written by Black women wasn’t appearing on Broadway did not mean they weren’t creating revolutionary art across the country. Throughout the 1960s and 70s, artists such as Adrienne Kennedy and Ntozake Shange were experimenting with form and breaking down convention in content and language. Kennedy’s Funnyhouse of a Negro explores the inner workings of the mind of her mixed-race protagonist, using symbolism and unique dramatic devices to critique racism and colorism in the American psyche. Shange’s piece for colored girls who have considered suicide/ when the rainbow is enuf exploded the traditional theatrical form and replaced it with poetry, movement and the intersections of the two to tell the stories of African-American and Afro-Latinx women of her community. Both playwrights’ work was recognized by the Off-Broadway critical community with Obie awards and have been essentially canonized as important dramatic literature. Shange’s play, for colored girls… made it to Broadway in 1976, playing 742 performances before closing in 1978.

With the larger commercial acceptance of the risks that Shange and her contemporaries were making, a door was opened for socially conscious and thought-provoking work to be developed by black women throughout the ’90s and early ’00s. One of the unique phenomena to come out of this time period was the one-woman show in the style of documentary theatre. Theatre artists such as Dael Orlandersmith, Anna Deavere Smith and Sarah Jones each created numerous pieces during this era, using social inequities and current events to fuel their work. They pushed boundaries by embodying people whose lives looked nothing like their own and providing audiences with glimpses into communities and issues that may not have been familiar to most theatregoers. Two of these incredible performances made it to Broadway: Smith’s Twilight: Los Angeles 1992 explored the race riots that occurred after a young black girl was shot in a grocery store by a Korean merchant, and Jones’s Bridge and Tunnel, which featured monologues from New York immigrants outside of Manhattan and their wide ranges of experiences. Though Orlandersmith’s work hasn’t been staged on Broadway, it has had many regional productions and her play Yellowman was a finalist for the Pulitzer Prize for Drama in 2002.

The Pulitzer winner of that same year, however, broke records of her own: Suzan-Lori Parks’ topdog/underdog was the first play by a woman of color to ever win the prestigious award for Drama. [2] The play, which premiered Off-Broadway in 2001 before transferring the following year, tells the story of two brothers, Lincoln and Booth, whose difficult relationships to money keep getting them caught in the vortex of gambling. Though this was her Broadway debut, Parks had been having regional and Off-Broadway productions of her work since the late ‘80s. The America Play, Venus and In the Blood continue to be widely produced. In 2015, her play Father Comes Home from the Wars, Parts 1-3 finished as a finalist for the Pulitzer. 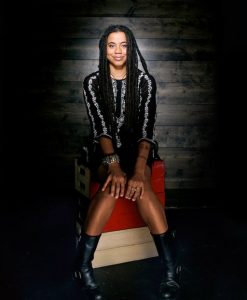 After Parks, the next black woman to win the Pulitzer Prize for Drama was also the next woman to win the award. In 2009, Lynn Nottage received the honor for her play Ruined. The play, set in the Democratic Republic of Congo, tells the story of women living through wartime and the effect that mass violence has on their lives, their minds and their bodies despite their attempts at neutrality. The piece received its world premiere at Chicago’s own Goodman Theatre and has had a vibrant life in regional theatres. Yet even after winning the elite literary award, the play has not appeared on Broadway.

This brings us to the unprecedented moment two years later when three black women had concurrent works up on Broadway stages for the first time. The Mountaintop, Stick Fly, and Suzan-Lori Parks’s reworking of Porgy and Bess each enjoyed success and helped make the 2011-12 Broadway season the highest grossing season ever recorded at the time. [3] Since the 2011-12 breakthrough season, productions written by black women have been more frequently gracing the boards of Broadway and earning more ‘firsts.’ In 2016, Danai Gurira’s Eclipsed opened at the John Golden Theatre with the first all-female cast and crew to be hosted by a Broadway house, making intersectional history both on and offstage.  In 2017, Lynn Nottage became the first woman to win two Pulitzer Prizes for Drama with her play Sweat, which also earned her a long overdue slot in the 2017 Broadway season. In 2019, both Katori Hall and Dominique Morisseau had a Broadway musical for which they wrote the book—Tina: The Tina Turner Musical (by Hall) and Ain’t Too Proud: The Temptations (by Morisseau). From a regional perspective, five of the ten most produced plays in American theatre for the 2019-20 season have been written by women of color and two of them are by black women (Dominique Morisseau’s Pipeline and Jocelyn Bioh’s School Girls or, The African Mean Girls Play). [4] 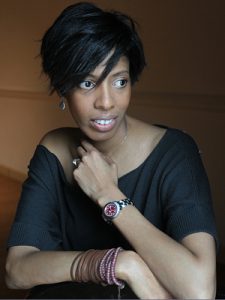 However, despite these accomplishments, black women and women of color’s voices in general are still woefully underrepresented. According to The Count 2.0, a study sponsored by the Dramatists’ Guild and The Lillys which surveyed 147 theatres and 3,970 productions nationwide, only 15.1% of the plays produced in America in the 2016-17 season were written by a person of color, and only 6.8% were by women of color. Women of any race only accounted for 28.8% of the produced playwrights for that season. [5] In a country that is 36.1% people of color [6] and has over 5 million more women than men, [7] these are shockingly unbalanced numbers. All of these statistics are up from previous years, indicating that there is slow but steady movement towards progress in the industry, however glacial the pace may be. Stick Fly’s place in the 2011-12 Broadway season marked a cultural breakthrough. But until women playwrights of color are given as many opportunities as their white male counterparts to share their work on the world’s biggest stages, there is still a long way to go on Broadway’s road to equality.