The last decade’s biggest story of disruptive innovation was arguably the rise of the ridesharing industry.

In 2010, Uber was only operating a limousine service in San Francisco and Lyft didn’t yet exist. By 2020, both were publicly traded companies valued in the billions and the traditional taxi industry was decimated. Millions of people worldwide now make their living as rideshare drivers, and millions more employ their services every day.

While the vehicle itself would change over time—from a horse-drawn hackney carriage to a yellow-painted automobile—the business model of a vehicle for hire has largely stayed the same since debuting in the early 1600s. Passengers hail or flag a taxi from the side of the street or at a designated stand. A fare is calculated based on distance travelled, number of passengers and other considerations. Drivers usually lease their vehicles from a company for a fee and pay for their own gasoline, and in return they get to keep all fares earned during their shift. 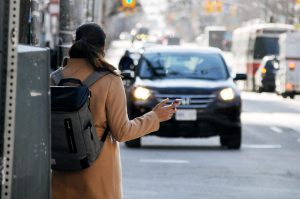 The seismic innovation of companies like Uber and Lyft was two-fold. On the technological side, these companies used powerful algorithms and GPS location services in their apps to create a more efficient ride hailing process. Instead of drivers and riders hoping to be in the right place at the right time to find one another or needing to pre-arrange a car with a dispatcher in advance, the closest available driver could be hired at the click of a button. Navigation and payment were also facilitated by the app, further simplifying the entire arrangement between driver and passenger.

The bolder and more controversial innovation, however, was the choice by these companies to serve as a technological middleman rather than a taxicab company with a fleet of vehicles. Uber and Lyft coordinate the fares and terms of a ride between a rider and a self-employed driver for hire who is providing their own vehicle and time; in exchange for this service, the companies take a percentage of each fare. This arrangement makes rideshare drivers independent contractors, not employees.

This distinction revolutionized who could work as a driver for hire. Taxi drivers have requirements they have to meet before they can start working. In Chicago, drivers must take and pass a Public Chauffeur Training Course and a Public Chauffeur Licensing Exam before they can get a license. Ride share drivers initially had no regulations to pass in the early stages. As long as you had a car and a smartphone, you could start working. All sorts of people began spending a little (or a lot) of their time in their cars making money driving others around.

Although part of a broader innovation called the “sharing economy,” the term “ridesharing” is itself a bit of a misnomer at this point. While Airbnb users are sharing a living space with the owners and WeWork customers are sharing an office space with other workers, ridesharing companies were never primarily about sharing a ride as most trips are taken by solo passengers. Nor is it about sharing a vehicle, which is what companies Zipcar and Car2Go provide. In 2015, the Associated Press adopted the term “ride-hailing” instead, despite noting that, unlike taxis, it is illegal to physically hail an Uber or Lyft from the side of the road. “Ridesharing” remains the term most commonly in usage, however.

In 2016, ridesharing apps overtook taxis for business travelers’ expense reports. By 2017, more rides were being taken each month on rideshare apps than in taxicabs in New York City. Lyft became a publicly traded company in March 2019, and Uber followed suit two months later. The number of Americans who reported ever having used a ridesharing service hit 36% in 2019, up from just 15% in 2015.

At the same time, complaints about the services became more widespread. Although Uber and Lyft claimed they would reduce congestion by making personal car ownership unnecessary, traffic in city cores has gotten worse. Many trips that would have previously been completed by public transit, walking or biking have become rideshare trips instead. Additionally, reports of violence and sexual assault during rides grew to an extent that the companies began more rigorously checking driving records and criminal histories of their drivers. Uber still reported 3,045 sexual assaults during rides in the United States in 2018.

The biggest challenges that rideshare companies have faced, however, have been political battles over workers’ rights. A study by the Economic Policy Institute in 2018 concluded that a rideshare driver ended up earning an average of $9.21 in hourly wages, after deducting the rideshare apps’ commissions and fees, vehicle maintenance expenses and taxes. Riders also aren’t given paid sick days, workers’ compensation or health benefits. A class-action lawsuit was filed in 2013 against Uber for its categorization of workers as independent contractors. The California Supreme Court ruled in 2018 that “workers who performed tasks within a company’s regular business—and were controlled by the company and did not operate their own firms—must be treated as employees,” and this ruling was bolstered by a California state law passed in 2019. However, a year later, California voters approved Proposition 22, which exempted gig economy companies from the state labor law in exchange for a minimum wage and a health insurance stipend. $200 million was spent promoting the ballot measure by Uber, Lyft and others. In spite of winning the battle in California, the Supreme Court of the United Kingdom ruled against the industry on the independent contractor/employee question in February 2021.

The COVID-19 pandemic hit the ridesharing industry hard. Trips taken steeply declined beginning the week of March 9th, 2020 as people began staying at home and sheltering in place. Within the span of a few weeks, rideshare drivers saw almost all of their business completely dry up. Uber reported business in the second quarter of 2020 was 73% lower than the previous year. Although many drivers had no choice but to keep at it, the risk of contracting the coronavirus scared many others away. Uber did announce it would offer 14 days of financial assistance to drivers who contracted COVID-19—if they could provide documentation of a diagnosis or an isolation order. A year later, rideshare traffic is picking up again, but the number of active drivers on both Uber and Lyft are way down compared to a year earlier and the companies are struggling to lure their workers back. everyone, it seems, is ready to get back in that driver seat.