Associate Artistic Director Geoff Button spoke with Michael Halberstam, adaptor and performer in One-Man A Christmas Carol, and Stanton Long, director of this year’s revival, to discuss how this version is unlike any other. 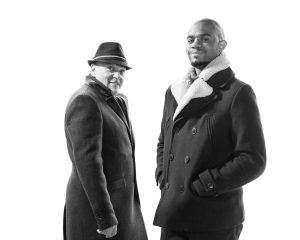 GEOFF BUTTON: Stanton, some of our patrons may not be aware, but you’ve been working at WT since 2016 and you’re currently our Design & Communications Manager, responsible for much of our email and video design. You’ve also been moonlighting in the film world for years. Can you talk a little bit about that? How did you get into it?

STANTON LONG: I started when I was in high school. CPS had a partnership with After School Matters and Gallery 37 that was an arts organization for high school students. Once I graduated, I was lucky enough to work with different theater companies that let me do promotional videos for them. Then I transitioned into doing my own work, to see if I could direct and how to run a set. And now I’m here doing it with you.

GB: Michael, how did you start performing A Christmas Carol, and how has your interpretation of the piece evolved over the years?

MICHAEL HALBERSTAM: I was commissioned to do a reading of it in the very early days of the theatre. Up until that point, my experience with the piece had been largely the goopy, sentimental stage productions or movie versions, and to actually read the story and get into Dickens’ narrative, I started to realize how much more complex and psychologically driven the story was. When I first performed it I was twenty-five, and now thirty years later, my own relationship to looking back on my life and the mistakes I have made, the opportunities to engage in charitable action that I have missed, starts to have a deeper resonance with me, especially as I start to think about the legacy that I want to leave behind.

GB: Stanton, this piece has historically been Michael simply reading from the book itself at a music stand. Can you talk a little bit about the unique experience of figuring out how to film something like this?

SL: Since this this is a one-man show, I didn’t know at first how I was going to make this as dynamic as possible. But I saw Spike Lee’s A Huey P. Newton Story, which was also a one-man show. I learned how to use static imagery to show the characters and moments and the different events. I took that and just ran with it. At the same time, this is a theatre piece, so you need to incorporate that as well. It’s a four-camera production, so we get to have different angles throughout and pace it a certain way. During the dialogue scenes, we get to play with how Michael’s angled to make it seem like he’s having an actual conversation.

GB: Michael, can you talk a little bit about how the process of filming this might affect how you perform it?

MH: For me, it’s going to be about releasing any expectation that I’ve had of how this was performed on a stage. When you allow a director to take the narrative, you’re inviting that director to have a point of view, so it was Stanton’s point of view that most interested me, in terms of translating this from a static medium into an organic streaming product. The other thing is that the scale of the performance has to come down. If I’m blasting it out on a stage, it’s going to be too big for the camera. And yet at the same time, we’re both trying to preserve the idea of a reading, partly because after one of the earliest performances, Jeff Still, a wonderful actor who has worked with us a number of times, said, “You will be tempted to memorize this. Please let me encourage you to fight that urge.” He said, “I cannot tell you the powerful impact of being read to, especially a story like this. I felt so childlike and yet adult at the same time.”

GB: This is obviously a story that people think they know well, and since you’ve both been working on it so intimately, is there anything about it that you find surprising or that strikes you as particularly meaningful this year? 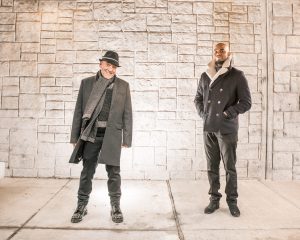 SL: I think the last couple of years I really understood we have this evil label for Scrooge. But he’s gone through a fair amount of trauma and some heavy stuff, and when you’re not careful, you find yourself in a certain space. This year, in particular, if we’re not careful, we can all easily go to that space, too. I’ve been through similar stuff, like he lost his sister, and I lost my sister and two other people that are close to me this year. I can really empathize and understand that human aspect of Scrooge. And at the same time, at least for me, at the end of this year, a light has been shown to us and we’re able to move forward and really see a bird’s eye view of the entire picture.

GB: Michael, what about you?

MH: I think one of the things that’s very difficult when you’re in that certain psychological space is that most of us don’t have the ability to step outside ourselves, look at ourselves, look at our actions, and see how we might be interacting with other people. If we’ve been taught anything over the past few years, it’s that self-examination is actually crucial to not just our own personal evolution, but the evolution of the species. And I think what the ghosts give Scrooge is exactly that, an opportunity to self-reflect. He has a very defined view of how he engages his employee, of how he sees his business and how he sees his relationship to other people. And when the camera literally irises out and shows him how his actions and his behavior are being interpreted by others, he is shaken to the core and foundation of his being. And I think that’s a wonderful sentiment for us all to have at this key moment. It’s a real reminder for us to open our eyes and look around and recognize, as Fred says, that we are not just fellow creatures bound towards the grave, but we’re all bound on the same journey. That we have to look after each other if we’re going to make it through. That is a very important conversation to be having right now. We’re so divided, and nobody’s listening to anybody, least of all themselves. And I think this this story really encourages us to look inside.