Notes from the Rehearsal Room—STICK FLY

From the Rehearsal Room to the Stage

As I sat watching first preview, I found myself awe of the laughter, sighs, and gasps that filled the theatre. The audience was loving this brilliantly written, directed and acted play. Of course, I didn’t expect anything less, but it was a shift. A shift from brightly lit space, from tapped out lines on the floor and mining out comedic gold and heartbreak in the rehearsal room a few doors over.

Our process began like all productions in the rehearsal room, full of staff and company members listening to the first read through; and then it was off to the races. Every day thereafter was spent discovering, analyzing and building the world of Stick Fly. We were beyond lucky to have the honor of having the playwright Lydia R. Diamond in the room. This opportunity allowed us hold Stick Fly even closer to our hearts and allowed our audience to lean in even further. Lydia’s point of view added another layer of nuance to the groundwork that Ron and the cast were laying we blocked through and began the process of running our show.

As we ran, stopped, fixed things, changed things, slowly molded this masterpiece. I watched, listened and scribbled sometimes indecipherable notes on my notepad. I discovered that Stick Fly reminds us that 15 years ago, we believed we had conquered racism. Hearing that as we survive the most outwardly racist presidency of my lifetime, sends chills down my spine. We watch this family discuss and examine how the ramifications of racism and classism don’t just exist in operating rooms, classrooms, the world. That they had joined us at the dinner table, on the porch and laid down with us in our bedrooms.

Stick Fly is an examination of how far we’ve come, regressed, and still must move forward in order to allow real change to occur. And with the help of a group of wonderful and deeply talented designers we moved that story into the theatre for Tech.

We are in the thick of it as we prepare for our round of previews leading up to opening on February 12. I would say Stick Fly is a play worth experiencing and talking about over dinner or the ride home. 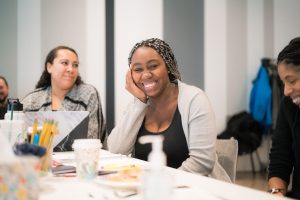