How high-intensity athletics are finding successful avenues into theatrical dialogues. 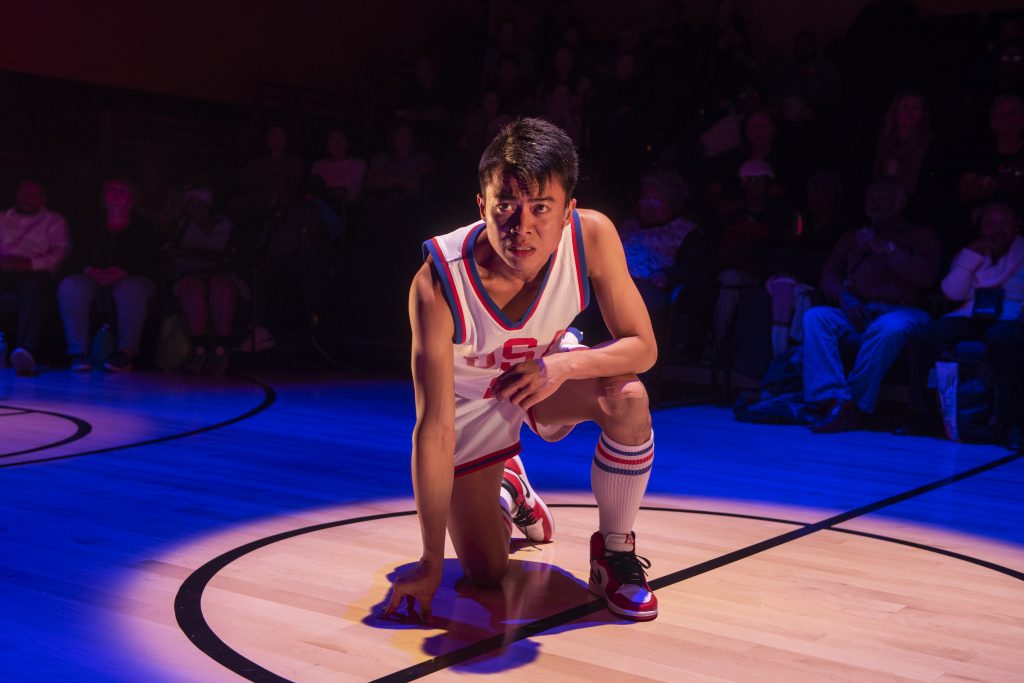 Portraying sports onstage is an increasingly popular framework in which to set plays dealing with complex issues.

In the last ten years alone, narratives about soccer, swimming, basketball, football and tennis players have successfully played stages nationwide. From the pool to the pitch, the field to the locker room, playwrights of all backgrounds are using the ambition, passion and deep comradery between teammates in athletics as a vehicle through which to tell profound human stories. Furthermore, each sport offers a unique element to the drama of the stories. The Last Match by Anna Ziegler tells a story much deeper than a high-level tennis match, brilliantly melding the complex psyches and personal lives of athletes to the energy of their sport.

The way sport is embodied onstage and whether it is a literal or more abstract presentation of the action can vary from play to play. In Yellow Card Red Card, Melisa Tien opts to keep the soccer ball invisible while in Sarah DeLappe’s The Wolves, actors were required to master ball handling and precise drills as an ensemble. Ruby Rae Spiegel’s Dry Land implies swimming is happening, while Lucas Hnath’s Red Speedo incorporates water into the space, with some productions allowing the audience to watch the actor swimming throughout the show. With her play FLEX, Candice Jones includes stage directions that indicate real basketball is taking place onstage with specific references to shots that could be made or missed depending on the performance and how to proceed with each outcome. In contrast, Lauren Yee explains that for her play The Great Leap, she was very interested in “how to put basketball—or at least the feel of basketball—onstage, when I wasn’t really interested in re-staging a basketball game.” Yee decided that the pacing and energy of the sport was more important to emulate than scoring literal points for the audience. 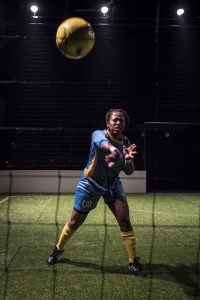 The ages of the central characters in these plays and the levels at which they are competing also vary. The Wolves and Yellow Card Red Card dramatize teams of teenage girls and young women, all dealing with the pressures and pitfalls of girlhood and growing up. Though the stories in each play differ widely, the goals of these playwrights were similar. DeLappe is quoted saying, “I think I was interested in having a story filled with young women in which they weren’t girlfriends or daughters or love interests or sexual objects, but where they were athletes. Where it was about their bodies, but about their ownership of their own bodies, and the strength of their own bodies.” Similarly, Tien was interested in creating “a play-and-sporting-event-in-one that explores what happens when young women in a socially and culturally restrictive environment begin to recognize their own agency.” For many women, sports are the first (and sometimes only) outlet in which they can break out of the expectations set for them by their surroundings. In each of these plays, the sport in question is conflated with the opportunity to better at least one character’s social standing through higher education scholarships and the ability to escape or change their current lifestyle, ultimately exploring how girls claim ownership of their lives and bodies. Despite the reality that resources and attention are disproportionately allocated to men’s leagues and most famous sports stories in the media have young male protagonists, theatre has been placing female athletes at the forefront of athletic narratives, creating uniquely women dominated casts, crews and productions at large.

Other plays explore the lives of adult athletes. There are preconceived notions, especially by Americans, that professional athletes live lives of leisure and ease outside of competition, but these plays encapsulate the psychological duress that athletes endure in order to be the best by any means necessary. Red Speedo features a professional who has spent his life devoted to the craft of his sport. The stakes are incredibly high for this character at the peak of his career and grappling with the ‘what ifs’ of losing the thing he has spent his life building. This also applies to the quasi-professional careers of collegiate athletes, as demonstrated by Andrew Hinderaker’s Colossal. This play tackles toxic masculinity and homophobia in the world of college football, as well as the sky-high expectations and risks that these athletes shoulder every time they take the field. The playwright problematizes the expectation of men to be “invincible” on and off the field despite physical, emotional or mental pain. The intimacy between the characters is at odds with the aggression, danger and masculine energies tied to the game itself, which
manifests in the contrasting “violent and grand physical gestures” of football onstage and moments of tenderness among teammates and family. 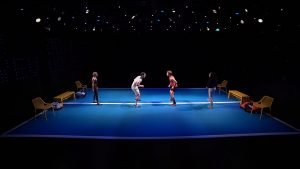 Though most of these plays are identified by the sport they depict, they are all about so much more than a game. For example, The Great Leap places a Chinese American teen in the heart of Tiananmen square in the summer of 1989, playing an exhibition game with a local university against Beijing right as the student protests against the Communist Party were reaching a fever pitch. Basketball is this boy’s ticket to engage with his mother’s culture firsthand and tells a story of belonging, perseverance and finding one’s place in the world. Yee engages with her experience as an Asian American, thinking about what it would be like “going to a country you’ve never been to, but at the same time, feel a deep connections towards because of what you look like, where your parents are from, and what that experience must be like; going in as the enemy, but also looking like the team you’re playing against.”

The Last Match tells the stories of two professional male athletes and the way their sport has become inextricably linked to their identity and sense of self. Playwright Anna Ziegler’s focus on tennis was also rooted in the fact that she “didn’t really want to write a play that was a typical sports play. I wanted it to be a play where the sport was very clearly a metaphor.” The mind of the tennis player from moment to moment is what fascinated Ziegler and compelled her to write this structure shattering, innovative piece: “Tennis is full of all these momentum swings and why does that happen? It’s so psychological. The fun I had was trying to figure out what players are thinking of when they have those swings.” She emphasizes that her play is about “ambition and never being satisfied… about hard work, and where it can take you and where it sort of stops short. How much do we have control over? And in the end it really does come down to our personalities, and how we’ve been formed as people is sort of what determines what happens to us.”

Clearly, none of these works could be simplistically labeled as a “sports play.” They all demonstrate that no athlete’s life is always centered around their sport because, as Ruby Rae Spiegel said, “nobody lives a one-issue life… We have so many intersecting concerns and problems, and so even though it might seem like a lot… You don’t categorize people like that  when they’re real people.”