Manual Cinema: Beyond All Projections

Manual Cinema is arguably the biggest Chicago theatrical success story of the past ten years. 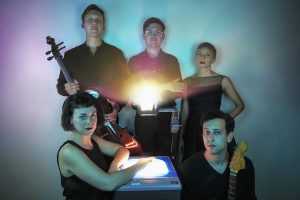 Founded in 2010, the performance collective—led by artistic directors Drew Dir, Sarah Fornace, Ben Kauffman, Julia Miller and Kyle Vegter—pioneered the use of “overhead projectors, multiple screens, puppets, actors, live feed cameras, multi-channel sound design and a live music ensemble” [source] to create a groundbreaking experience of cinematic and theatrical storytelling that has dazzled audiences around the world. Even with all those descriptors, it’s still a difficult art form to describe with words. Kauffman described their work as “kind of like watching an animated film but all of the elements are performed live” in an intricately choreographed performance that The New York Times affectionally called “organized chaos.” [source] The group’s name itself is perhaps the best description of their work, one which Fornace said they started using “because sometimes when you say puppet show people are like, ‘Oh, you mean like hand puppets? Like at a library? My parents are like: ‘What do you do?’” [source]

The beginnings of the collective date back to 2009 when Julia Miller and Sarah Fornace met while working on a collaboration between the Chicago Symphony Orchestra and Redmoon Theatre. The organizations were creating a new production of Swan Lake, with the Redmoon company performing a puppet version of the story while the CSO played the Tchaikovsky score. Soon afterward, Miller found an old overhead projector in her landlord’s garage and started experimenting with its possibilities. When she was invited to develop and perform an original piece as part of Rough House Theatre’s Experimental Puppetry Festival in 2010, Miller invited Fornace to collaborate on the project, and Fornace suggested they add Dir to the team as well. Wanting to add sound and music to accompany the visuals, Ben Kauffman and Kyle Vegter—two musician/composers who performed as part of Oh+Ah, a Chicago-based ambient sound collective—were added to complete the line-up. The 20-minute play, telling the story of a lonely teen girl named Lula who becomes obsessed with a country music duo she hears on the radio, was performed with one projector and a pre-recorded soundtrack. The show and the group’s groundbreaking approach were a hit, and the group continued to stage the show in venues and bars around the city to growing acclaim. “We were like, ‘Oh! People are into this!’” said Miller. “‘Maybe we could make another thing! Maybe we should come up with a name!’ [source]

The freshly named Manual Cinema started working on a new piece and performed an early version of it at a Halloween party at Dir and Fornace’s apartment in 2010. Guests were ushered outside to the sidewalk to watch the puppet show projected on the apartment’s window shade. By the following summer, the project had grown and developed into Manual Cinema’s first full-length production, which premiered in a Logan Square bar. Ada/Ava is the story of twin septuagenarian sisters living in a gothic New England home. After Ava passes away, Ada struggles to navigate her new solitary life as her grief plunges her into fantastical and supernatural delusions. Dir described the play as “a psychological thriller along the lines of Hitchcock’s Vertigo, but it was inspired by the personal experience of witnessing my grandfather’s mourning process after my grandmother’s death, and seeing how his grief was expressed in small acts of daily routine.”

Although it is now an inseparable part of the company’s DNA, these early performances were not staged in a way that allowed audiences to watch the film be constructed. Only the final product on a screen was visible. It wasn’t until during a residency at the Logan Center for the Arts in 2012 that the group made a breakthrough. They were expanding their inaugural 20-minute piece into a full-length production, in collaboration with video designer Rasean Davonte Johnson (who created the projections on WT’s production of Vietgone). The new Lula Del Ray was performed by the collective In a black box theatre while the video was projected onto various surfaces in the lobby along with an immersive sound installation. Audiences could wander back and forth from the lobby to the theatre to see both the process and product. When the company was invited to perform the show as part of Theatre on the Lake’s summer 2013 season, the group’s need to fill a larger theatre space led to them devising their signature style: puppeteers and musicians performing the piece live on stage while the resulting film was projected onto a screen hanging above them. A Manual Cinema show, as we now know and understand it to be, was born.

Commissions and invitations to perform were flowing in for the acclaimed group as their profile grew. Manual Cinema became the first American company in 17 years to perform at the Tehran Mobarak Puppet Festival in Iran when they performed Ada/Ava there in 2014. It was the group’s first international performance, and they were so nervous about damage to their fragile overhead projectors that they carried the lenses in their arms on the plane. [source] “We did two shows to a packed audience, and it was the first time they flew the American flag in Tehran since the revolution,” said Miller. “They didn’t have gaffer’s tape in the theater because they had been under the trade embargoes. It was so emotional to be invited, and I [felt] fortunate to be able to share our work.” [source]

The group’s popularity exploded from there, as did their touring schedule, and as a result the group began performing more outside of Chicago than in their home city. The New York Times theatre critic Ben Brantley published a glowing review of the off-Broadway run of Ada/Ava in 2015. “The common wisdom is that once magicians reveal the secrets of their trade, the magic disappears,” wrote Brantley. “But that’s hardly the case with the uncanny coven of young sorcerers who operate under the name Manual Cinema.” [source] The following year, Manual Cinema collaborated with The New York Times on a documentary video short titled “The Forger” about Adolfo Kaminsky, a man who saved the lives of 14,000 Jews during World War II by creating fake passports and documents. The video won a News and Documentary Emmy Award in 2017. [source]

Manual Cinema’s newest full-length pieces show an ever-increasing ambition and complexity, making each one an instant contender for theatrical event of the year. The End of TV explores the death of the manufacturing industry and America’s growing obsession with TV and celebrity. “We started working on the piece right before the 2016 election and finished it after,” said Vegter. “I think were were kind of searching for how we got here—how did the country get to this place of rampant consumerism and a place where a reality TV star can be elected president?” [source] The piece—which used live camera feeds and green screens to recreate QVC informercials from the 1990s—debuted in 2017 in New Haven and then had a multi-week run in Chicago at the Chopin Theatre in 2018. A few months later, the group debuted another new show in Chicago: an adaptation of Mary Shelley’s Frankenstein, commissioned and premiered by Court Theatre. Featuring the largest cast of puppeteers and musicians ever assembled for a Manual Cinema production, the show became a hit at the Edinburgh Fringe Festival in 2019.

It was at this point that Writers Theatre began a conversation with the collective, having seen and been wowed by both The End of TV and Frankenstein. Although ideas for a new piece continue to be explored, both MC and WT liked the idea of bringing more of Manual Cinema’s existing work to Chicago stages. The piece that stood out the most was Mementos Mori, which had originally premiered at the Museum of Contemporary Art in Chicago in 2015 as part of the Chicago International Puppet Festival. Since then, the collective had continued to develop the play as it toured to New York for a run at the Brooklyn Academy of Music in 2017 and elsewhere. “Every show changes and goes through several iterations,” explained Miller. “When we’re creating a show we’re so involved with the tech stuff that we don’t see all the elements until the production is fully formed, and then we can see how well the story is working.” [source] WT offered space and support for Manual Cinema to finish work on the new version of Mementos Mori—which follows the character of Death, having traded in her scythe for a smartphone app named “reapr,” as she has a life-changing encounter with three people while dutifully going about her business one day in Hollywood.

The Covid-19 pandemic upended plans to premiere Mementos Mori in spring 2020, but both Writers Theatre and Manual Cinema enthusiastically look forward to staging the new and improved version of the show in the future when it is safe to return to live performance. The pandemic also impacted Manual Cinema’s plans for a summer festival to celebrate the group’s 10 years of existence. Instead, Manual Cinema shared archival recordings of four of their productions—Lula Del Ray, No More Blue Memories, The End of TV, and Frankenstein—to stream for free on their website. And now the collective brings another new production to life, envisioned and created for a time of socially distancing for both performers and audiences. Manual Cinema’s Christmas Carol will be performed and streamed live from the collective’s Chicago studio straight to homes around the world. The adaptation reflects the times as well, introducing us to a family attempting to keep their holiday traditions—including an annual puppet show—alive over Zoom while a pandemic keeps them isolated in their homes.

Ten years removed from that infamous Halloween party, Manual Cinema’s Christmas Carol shows the collective is as creative and innovative as ever. “I don’t think any of us expected to be in this line of work or saw ourselves making this kind of art when we started out,” said Dir. “All of us fell into it, and we’re grateful that we found it and each other—or the work found us. For the first couple years it was just experimentation of the medium, trying to figure out what this is, Manual Cinema. What makes it really creatively alive is that we’re still trying to answer that question, and the work is continuing to give us new and exciting answers to that question. The answers keep changing, so that’s what makes it a worthwhile project to continue.” [source]