Ma Rainey: Mother of the Blues

Ma Rainey is often called the “Mother of the Blues” by music historians. Living Blues magazine quotes her piano player, Thomas Dorsey, as saying she was a big star from “way back there about 1912.”

Born Gertrude Pridget and originally from Columbus, Georgia, Ma Rainey began touring with her new husband William “Pa” Rainey, a dancer, singer and comedian, in 1904. Touring acts such as The Rabbit Foot Minstrels and Tolliver’s Circus peppered the South, following the harvest and offering all sorts of attractions, including acrobats and chorus lines. Ma and Pa Rainey toured with many of these groups with other prominent Black entertainers of their time such as Fred Walker. These companies were instrumental in spreading Blues music around the southern United States in the early 20th century. 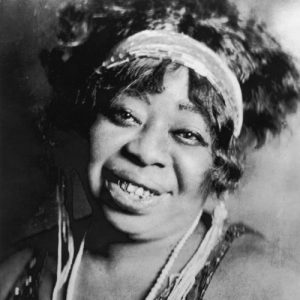 From 1914 to 1916, the Rainey duo was billed on the Musical Extravaganza tour as “Rainey and Rainey, Assassinators of the Blues.” For her performance, Ma Rainey would emerge in a decadent tiara, gown, and necklace of $20 gold pieces, often holding a gun in one hand and an ostrich feather in the other. After the Musical Extravaganza tour, Ma Rainey was so popular her shows were integrated in 1917, with half the tent designated to white patrons and half to Black patrons. If there was overflow, sometimes the patrons sat in mixed audiences just to see her perform. Ma Rainey was a wild entertainer but she was also a shrewd businesswoman. Her employees were not allowed to drink the evening of a show, and she traveled with a choreographer and a troupe of dancers. She was known for being a strict boss who kept her team on point, but not a cruel one.

Ma Rainey migrated to Chicago in the early 1920s after parting company with her performance partner and husband Pa Rainey to pursue a solo career. Chicago was home to a vibrant blues scene but lacked stars that transcended the city. Ma Rainey became the first woman many recall hearing sing the blues, and it was here in Chicago that the singer would legitimize country blues and enjoy the majority of her stardom. She signed with Paramount Records in 1923 and made her first recordings, after having been a live performer for more than two decades. The success of her recordings is often credited with saving the label in its early days, and she would record close to one hundred songs between 1923 and 1928. Early musicians such as Blind Lemon Jefferson (1983-1929) also migrated to Chicago in the early 20s and were playing in clubs, but Jefferson didn’t start recording with Paramount until 1926, three years after Ma Rainey.

A queer woman, Rainey often sang of same sex relationships in songs like “Prove it on Me,” and was known for sometimes preferring women to men. So much so, the cover for that record is Ma in a suit and fedora flirting with young women while a cop looks on from across the street. Bessie Smith, a contemporary of Ma Rainey’s referred to as “the Queen of the Blues” and whom Rainey probably coached while on tour in their early careers, is also said to have had a variety of lovers. Because of this cheeky, up front way of doing things, Ma Rainey was a forerunner of the ‘parody blues’ that would be sung by artists like Lil Green. They could make fun of their romantic partners without fearing repercussion in songs like “Why Don’t You Do Right?”, penned by Chicago blues writer Kansas Joe McCoy in 1936 and later made popular by Peggy Lee. 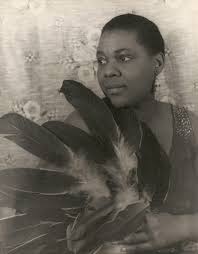 Ma Rainey’s influence on blues musicians and the blues scene of the time cannot be underestimated. She shared billings with Bessie Smith, T-Bone Walker, Georgia Tom Dorsey and Tampa Red. She would even travel up to New York City and cut sides with Louis Armstrong and Buster Bailey. It is said that Rainey had a lasting influence on Armstrong, and that he adopted many of her performance techniques into his stage presence. Ma Rainey had a unique style that she refused to change, and she loved being professional and cutting records only in the manner she deemed appropriate. She was not going to let a label dictate her sound.

The Great Depression took a toll on the popularity of blues music, and Ma Rainey was not willing to adapt her music to fit the style of the times. Ma Rainey was back to touring live again by the early 1930s with significantly less wealth. In 1935, she retired to her hometown of Columbus, Georgia to manage two theaters. She died there four years later at the age of 53. Although her career did not survive the Great Depression, the popularity of the country-fied blues she generated would persist well after she died. In 1932, BlueBird records would emerge as a division of RCA, and dominate the Chicago blues market, producing artists such as Big Bill Broonzy and Sonny Boy Williamson. In fact, most of the prominent male Chicago blues star, such as Muddy Waters, Buddy Guy or Willie Dixon, were active from the late 1930s to early 1960s, long after Ma Rainey had passed on. 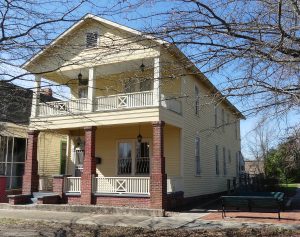 The legacy of Ma Rainey was affirmed with her induction into the Blues Foundation Hall of Fame in 1983 and the Rock and Roll Hall of Fame (an an “early influence”) in 1990. The singer’s childhood home is now the Ma Rainey House and Blues Museum. In Daphne Duval Harrison’s book about early female Blues vocalists, Black Pearl, the author has this to say in tribute to the legendary singer: “The goodhumored, rollicking Rainey loved life, loved love, and most of all loved her people. Her voice bursts forth with a hearty declaration of courage and determination—a reaffirmation of black life.”