Another Dimension: The Science in Fiction On Stage

A Number is a difficult play to discuss without giving away any surprises. 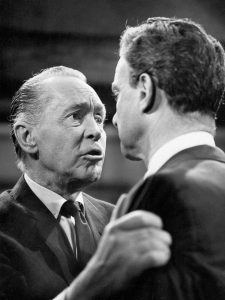 Pictured: Franchot Tone and Jonathan Harris in The Twilight Zone, “The Silence” (1961). The plot of this episode was based in part on Anton Chekhov’s The Bet. Photo courtesy of Wikipedia Commons.

If you were to Google it and read reviews of other productions, the plot will almost certainly be spoiled. What can be safely said is that the play feels like an episode of The Twilight Zone or Black Mirror, depending on which science fiction TV show reference speaks to you. The play is also part of a litany of artistic works about science and scientists that have long captivated the imagination of readers and audiences.

Before science had established itself as a legitimate discipline and important part of society, dramatists often used it as an object of ridicule. In The Clouds by Aristophanes from 423 BC, Socrates and his associates are depicted as making completely useless discoveries, such as measuring distances by how far a flea can jump. Two thousand years later, Ben Jonson was showing how people could still be duped by con artists posing as experts in his 1610 play The Alchemist. As the Scientific Revolution brought sweeping societal changes, science’s role in the world became more normalized, and writers began to take science seriously as material that could be used for more than just comedy. Mary Shelley’s Frankenstein, published in 1818, broke new ground for the intersection of science and fiction in narrative storytelling. Although Shelley focused more on the gothic horror aspects of her novel as opposed to the details of reanimating dead tissue, she did establish several classic science fiction touchstones: a mad scientist, futuristic technological achievements and an uncontrollable creation. Later Victorian novelists including Jules Verne (Twenty Thousand Leagues Under the Sea), Robert Louis Stevenson (Dr. Jekyll and Mr. Hyde) and H.G. Wells (The Time Machine) would continue to explore and refine the genre to great success. Many of these landmark novels would be adapted for the stage. In fact, Richard Brinsley Peake’s 1823 play Presumption; or, the Fate of Frankenstein helped further popularize Shelley’s novel and led to the novel being reprinted, this time with Shelley’s name on the title page—it had originally been published anonymously.

The 20th century, with its technological advances and the popularization of cinematic art, saw the flourishing of science fiction, and playwrights became much more interested in creating original works that explored the genre. With his 1906 play The Doctor’s Dilemma, George Bernard Shaw fictionalized a scenario in which a doctor who has invented a new cure for tuberculosis is only able to treat a handful of patients at a time and must make the difficult decision of who to save. WT staged a production of the play in 2004 at Books on Vernon, starring Kevin Gudahl, Scott Parkinson and Karen Janes Woditsch, among others. Historical incidents involving science also became popular topics for plays. Influential German dramatist Bertolt Brecht’s Life of Galileo (1943) dramatizes the famous astronomer and his conflict with the Catholic Church over the heliocentric nature of the universe. Many American schoolchildren as part of their school curriculum now read about the Scopes “Monkey” trial (a legal case from 1925 in which a teacher was prosecuted for teaching evolution in a Tennessee public school) in Jerome Lawrence and Robert E. Lee’s Inherit the Wind (1955). 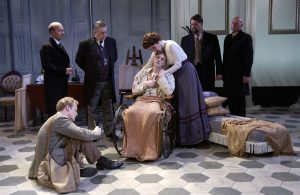 Tom Stoppard, the chief rival to Caryl Churchill for the title of greatest living British playwright, has been fascinated with science and writing it into his plays since the 1980s. His play Hapgood (1988) is a tale of international espionage that also uses elements of quantum mechanics to demonstrate the complexity of human personality. With Arcadia (1993), the playwright, as part of a much larger plot about literary intrigue that plays out over two time periods, uses discussions of chaos theory as a central component of the plot. WT produced Arcadia as the opening production of our new theatre center in 2016. Stoppard’s most recent play, The Hard Problem (2015), is his most scientific yet, as it dramatizes a neuroscientist and her search to understand the nature and reason of consciousness. 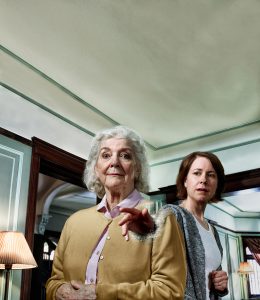 In the years since A Number premiered in 2002, several incredible plays that are indebted to classic science fiction have come out. Jordan Harrison’s Marjorie Prime, which WT produced as the last play at Books on Vernon in 2015, imagines a future where holograms of lost loved ones are used as either a caretaking tool for the elderly or a method of grief therapy for the bereaved. Constellations, a 2012 play by Nick Payne, is about the romantic relationship between a beekeeper and a cosmologist, but using the theoretical concept of multiple universes, the play jumps around showing different versions of how this love story might play out. In Anne Washburn’s Mr. Burns, a Post-Electric Play (2012), a group of survivors of an apocalyptic event try to remember an episode of The Simpsons, eventually forming a performance group that stages recreations of episodes of The Simpsons, including commercial breaks, for the entertainment of other survivors of the collapse of society.

As is her penchant, Caryl Churchill has never returned to writing anything that could be called science fiction since A Number, and yet in her one attempt she succeeded perfectly in getting to the core of what makes a really good science fiction story: a believable yet futuristic scenario, real people having to deal with the consequences of what science has achieved and a central question posed for us to continue to reckon with after the story ends. As Lyn Gardner wrote in The Guardian when first reviewing the play, “The key question [Churchill] asks in this play is from what the essential core of self derives: from nature or nurture, genetic inheritance or environmental circumstance?”