Back In My Day 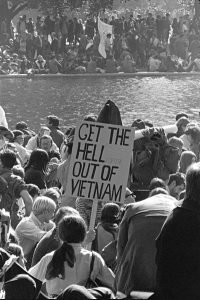 Vietnam War protestors march at the Pentagon in Washington, D.C. on October 21, 1967. Photo via Wikipedia Commons.

In Eleanor Burgess’s The Niceties, Zoe, a bright, ambitious, black Political Science major, goes to the office hours of her acclaimed, renowned (and white) professor, Janine, to seek feedback on a paper she has written for Janine’s “History of Revolutions” class. However, the conversation quickly spirals from polite disagreements into heated arguments. These two characters cannot see eye-to-eye with their fundamentally different points of view on America, its history and their experiences within it. This dynamic—the Baby Boomer versus the Millennial—is a familiar one. A generation that’s stubborn, technologically deficient and behind the times versus one that is lazy, entitled and killing industries like doorbells, mayonnaise and cable television. These unfair evaluations are frequently made by each of the other, but why is it that these two groups clash so often and on so many fronts?

It’s important to understand who Baby Boomers and Millennials are and what the country was like when they came of age. The Baby Boomers (born between 1946-1964) [1] are the children of the generation who lived through World War II, and they grew up during the subsequent “booming” post-war economy. They experienced Cold War anxiety, President Lyndon B. Johnson’s Great Society of the 60s and the energy crisis of the 70s. Boomers saw their schools desegregated, watched the passing of the Civil Rights Act, protested the Vietnam War and fought for the Equal Rights Amendment. [2] They were the first generation to grow up with TV, danced to rock n’ roll and brought counterculture into the mainstream. They grew up in a much more homogenous America—75% of Boomers are white, 10% are Hispanic and 12% are black [3]—and their communities remained largely segregated, due to the redlining of urban neighborhoods and the White Flight to the suburbs that accompanied a sizable black migration from the rural South into the metropolitan areas of the North and East. [4] Most Boomers grew up with the American Dream still attainable: goals of “pulling themselves up by the bootstraps” to buy themselves a single family home, find a spouse, have 2.5 children and retire on their well-stocked 401(k)s.

In contrast, Millennials (born between 1981-1995) came of age during the Great Recession of the mid-2000s. They grew up with the national trauma of 9/11, heard the declaration of the War on Terror and witnessed the swearing-in of the country’s first black president. They are the most diverse and urban generation in history. 44% identify as people of color and 88% live in metropolitan areas. Many Millennials were born into a world where technologies like personal computers, the internet and smartphones were becoming exponentially more commonplace as the technological revolution that began in the 1990s continued. Information and communications could be accessed instantaneously, changing the way that tech users interacted with each other and the world around them. News, messages and other alerts could update moment-to-moment, allowing for a connected and aware global citizenry. Because of social media and mobile news, there is an urgency, transparency and personalization in incoming information. The mind of a Millennial has grown up with a demand for speed and immediate access that Boomers simply did not have at their same age. This translates into a different way of navigating not only technology, but societal ills and modern political movements as well.

Each generation had its trials and tribulations as they reached adulthood, and these contexts impacted their worldviews and the way they interact with others. As they entered the workforce and graduated college, the Boomers’ expectations were completely different than Millennials’. In the 1970s, getting into college was less competitive. For example, Stanford University had an acceptance rate of about 31% in comparison to 4.3% in 2019. [5] Tuitions were 213% less expensive than they are now, and textbooks were 813% cheaper. [6] As programs like Medicaid and Medicare were being introduced and the War on Poverty created more jobs, Boomers were able to take the workforce by storm post-graduation while remaining financially stable enough to self-support and confident their future was secure.

“Boomers entered a company and were expected to pay their dues in order to move forward. The understanding was if they worked hard for the company for several years, and the company benefited from their work, they’d be rewarded with pay raises and promotions. If they stayed with the company long enough, they’d have a pension and a 401(k). This was the bargain struck between an employee and company in the old days: you work hard and in exchange, we’ll give you security and stability.” [7]

Millennials, on the other hand, are a bit more existential about their employment prospects. They graduated to find the American economy in disarray, the housing bubble burst and the stock market tanked. Employers were shrinking their workforce to make up for lost revenue, making post-graduation employment opportunities sparse. The economic situation that Millennials entered was worse than that of their parents, a rarity in recent history, resulting in a stalling of socio-economic mobility. Alongside the rising costs of living and higher education, Millennials have also accumulated baffling amounts of student loan debt to acquire degrees, with the national student debt total reaching $1.52 trillion in 2019. [8] Despite the rising percentage of individuals with college degrees, the worth of those degrees to employers is steadily dropping. [9] Where once a bachelor’s degree was an exceptional demarcation of qualification, it has now become an expected prerequisite in order to be considered even for entry level jobs. Millennials are facing a disturbingly insecure future, so they seek career paths that fulfill them more immediately:

“With little hope of debt freedom, Millennials chase what makes them happy instead of what makes them wealthy. They aren’t climbing the corporate ladder—they’re starting their own businesses, driving social impact and bringing focus back to community and family by starting or involving themselves in influential causes. They see work and life as an integrated concept and strive to make careers of their passions. Since their college degrees have done little to fast track their careers, Millennials are thirsty for knowledge and crave learning through their own experiences and the experiences of others.” [10] 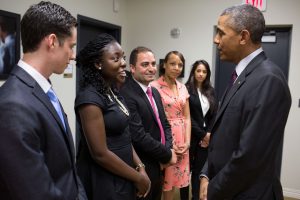 This discrepancy in upbringing and experience resulted in a massive shift of values from one generation to the next. For example, more than half of Boomers were married by the time they were 21-23 years old. Today, Millenials are pushing back their monogamous commitments. They are, on average, waiting 5-10 years longer than their parents to marry, and only 37% are currently married by the age of 36. [11] The Boomer focus on family and security feels less accessible to the latter generation, especially with the deep psychological impact of the environmental crisis taking a toll on their concept of futurity. As a result, Millennials tend to aim their energies towards securing their ability to live before taking on the responsibility of building a family. It is a common trope from older individuals that Millennials “kill” certain businesses or “waste” their money on frivolous goods (e.g avocado toast). But the reality of the situation is that Millennials simply choose to spend their money differently than Boomers did at their same age and opt to live differently due to changes in their personal values as well as the need to accommodate a very different economic, environmental and social climate.

It makes sense that, with all of these dissimilar facets of their experience, Boomers and Millennials often come into conflict when discussing our nation’s history, its merits and its failures. Whether it be moralistic, practical or personal, their disagreements span all aspects of life and can cause rifts in professional and, in the case of The Niceties, academic settings. Janine understands progress as a slow but steady arc towards justice, but Zoe insists that change comes with a radical, fast paced agenda. This puts them at odds initially over Zoe’s schoolwork, but it is clear that the division runs deeper than the classroom.

[6] Hillary Howffower, “9 Ways College is Different For Millennials Than It Was For Previous Generations,” Business Insider, September 24, 2018, https://www.businessinsider.com/how-college-is-different-now-then-millennials-vs-baby-boomers-2018-9.

[7] Mark Lurie, “Why Is There Such a Disconnect Between Baby Boomers and Millennials When It Comes to Work Ethic?” Forbes, September 25, 2018, https://www.forbes.com/sites/quora/2018/09/25/why-is-there-such-a-disconnect-between-baby-boomers-and-millennials-when-it-comes-to-work-ethic/#1babdbe01de7.

[10] Elizabeth Dukes, “The Number One Thing Millennials and Baby Boomers Don’t Understand About Each Other,” Inc., August 24, 2016, https://www.inc.com/elizabeth-dukes/the-no-1-thing-millennials-and-baby-boomers-dont-understand-about-each-other.html.