Writers Theatre has always been a home of sorts for David Cromer. 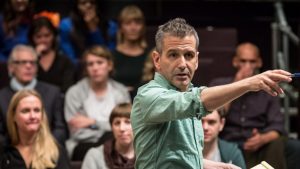 Next to Normal will be the sixth production he has directed for the company, more than he has helmed at any other Chicago theatre. When asked what he remembers about working at WT for the first time, the director slyly but sincerely responds, “I got paid. I’ve worked for free so many times. It was not nothing when we were young and starving that the theatre was going to pay you. Going to where you were actually going to be valued was nice. [Working at Writers Theatre] has always been financially and artistically satisfying. You tend to go to a place where the value system is the same [as yours].”

Born and raised in Skokie, Cromer started directing in Chicago storefronts after dropping out of Columbia College. One of his first professional directing jobs was at WT in 1995, when he directed a production of Oscar Remembered at the Books on Vernon space, which starred Artistic Director Michael Halberstam as Lord Alfred Douglas, the lover of Oscar Wilde. He would return to the Bookstore to direct Booth by Austin Pendleton in 2000 and The Price by Arthur Miller in 2002. The latter production would win him a Jeff Award for Best Director.

Within a few years, Cromer became an established name in the Chicago theatre community and New York was beginning to take notice. Orson’s Shadow, a play by Austin Pendleton which had its premiere at Steppenwolf in 2000 under Cromer’s direction, was given an Off-Broadway run at the Barrow Street in 2005, again with Cromer at the helm. In early 2008, Cromer again took a Chicago production to New York. This time it was a new musical adaptation of Adding Machine by Jason Loewith and Josh Schmidt, which had premiered at Next Theatre Company in Evanston in 2007. The Off-Broadway production ran for more than five months and won four Lucille Lortel Awards, including one for Cromer as Outstanding Director.

However, it was a classic play, not a new one, that would forever transform the director’s career. After opening Adding Machine Off-Broadway, Cromer returned to Chicago to direct a revival of Thornton Wilder’s Our Town for The Hypocrites in the basement studio of the Chopin Theatre, in which Cromer would also play the role of the Stage Manager every night. The fresh approach Cromer took to such well-trodden material was extraordinarily powerful, and an Off-Broadway production of his Our Town opened in February 2009 at the Barrow Street Theatre, playing 648 performances before finally closing in September 2010. It remains the longest running production of Wilder’s play in history. Cromer won  his second Lortel Award in a row for Outstanding Director, and also picked up an Obie Award for his Directing work as well. The success of Our Town led to two Broadway directing jobs, Brighton Beach Memoirs in 2009 and The House of Blue Leaves in 2011. Cromer was also named one of the 2010 “Genius Grant” fellows by the MacArthur Foundation for his work “reinvigorating classic American plays and illuminating their relationship to the present.” 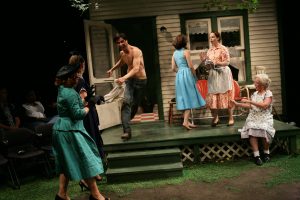 In the midst of this rapid ascent to the top tier of American directors, Cromer still made time to return to WT. A few months before Our Town opened in New York in 2008, Cromer directed William Inge’s Picnic at Writers Theatre. With a design that put the audience right on top of the backyard between two homes in rural Kansas, the production was highly acclaimed, with Terry Teachout of The Wall Street Journal calling it one of the best theatrical productions he had ever seen. Two years later, in the summer of 2010, Cromer returned to Glencoe again, this time to direct A Streetcar Named Desire by Tennessee Williams. The production was an instant hit and became one of the most successful productions in WT history. Audiences were completely immersed in the world of New Orleans as the Kowalski home was painstakingly realized before them, with seating on all four sides of the stage, mere feet away from the actors. Such was Cromer’s celebrity at this point that even Charles Isherwood of The New York Times flew in to review the production, calling it “the most uniformly well-acted production I’ve yet seen.” [article] 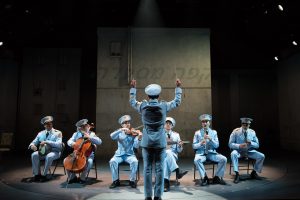 The Atlantic Theater Company world premiere production of The Band’s Visit by David Yazbek & Itamar Moses, based on the screenplay by Eran Kolirin, directed by David Cromer. Photo by Ahron R. Foster.

In the intervening years, Cromer has continued to work steadily and successfully in New York, London and all around the country. His most recent career triumph began in late 2016, when he directed the world premiere of a musical by Itamar Moses and David Yazbek at Atlantic Theater Company. Adapted from a 2007 Israeli film, The Band’s Visit tells the story of an Egyptian police orchestra that comes to Israel to perform at an Arab cultural center but mistakenly goes to the wrong town and is forced to spend the night there. The Off-Broadway production was a hit, well received by critics and audiences alike, and yet it seemed an unlikely candidate to transfer to a Broadway populated by much flashier and tourist-oriented fare. Nevertheless, a Broadway transfer opened in October 2017 and overcame all doubts, receiving universal acclaim and winning 10 Tony Awards, including Best Musical. Cromer was honored as the year’s Best Director for his work bringing the musical to life. The production announced recently it will be closing in April 2019 after a 16 month run.

It’s only fitting, then, that in the midst of another great bout of success, Cromer has chosen to return to his home in Chicago to direct Next to Normal. This will be Cromer’s first time working in the new Writers Theatre building, despite being involved in discussions about the design of the space, but his understanding of the theatre’s mission is uninterrupted. When discussing The Band’s Visit, Cromer remarks that even though the musical was “playing in a big Broadway theater, the aesthetic was that the show was going to be clear, its shifts were going to be built, it was going to be very true to its word, and the hope was that the audience would lean forward. I couldn’t tell you which came first, whether I knew that was what I valued when I was young or whether I learned that at Writers or if we all learned it together or if certain artists and certain theatres just find each other, but that was the experience and I’m glad to be back.”