The author of The Niceties discusses her love of history and the inspiration for the play with Director of New Work & Dramaturgy Bobby Kennedy. 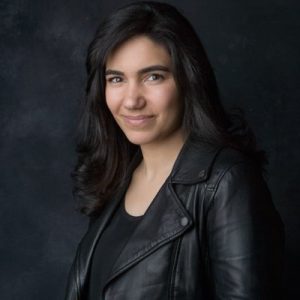 Bobby Kennedy: You studied history in undergrad and then taught the subject for several years—and The Niceties isn’t the first play of yours to deal with the education system. What do you love about history and education? What makes you want to write about them in your plays?

Eleanor Burgess: My love of history is part of my love of writing because I think of history as storytelling. Why do things happen? What are people capable of? Where do we come from? What’s the right thing to do? What’s the wrong thing to do? What are our responsibilities to each other? These are the core issues of history. I find it compelling to wonder—what is our story as Americans? And as individuals? What happens when we can’t agree on what the story is? So much of what historians do is say, “well, I look here and I see these facts,” and then, “I look here and I see different facts,” and I think that’s sort of what a play is. Even when it’s like a family drama, you have one sibling saying, “I look at our past and I see this,” and you have another sibling saying, “I look at our past and I see something else.” Drama, like history, is about the construction—and the questioning—of a narrative.

I also think that my love of history led me into writing because, to some degree, writing for me starts where the work of the historian stops. First of all, there’s the people whose stories never got told. There’s the stuff that the official public record doesn’t say. What was going on with that person that made them write that letter or support that battle or vote that way? How does the personal interact with the public? And then there’s also stories that have been lost on a grand scale. We have to write fiction about women’s experience in history because the factual record is too patchy. We have to write fiction to make up for the class disparity in the records that were left behind, because there’s so many parts of history that we don’t know what was going on with ordinary people, we only know what was going on with the wealthiest people. And then, of course, with race in America, the people whose stories were written down and retold are mostly white Americans. A wonderful thing that storytelling and fiction can do is supplement the telling of collective history with untold stories and speculation. I really see those two pieces of my life as complementary.

BK: There was an incident that occurred at Yale University in 2015 that partially inspired you to write The Niceties. Can you tell us about it and why it had such an impact on you? 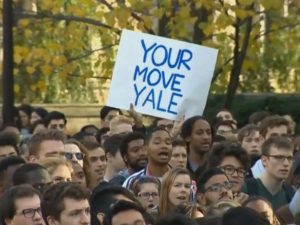 Pictured: Yale University students and supporters participate in a march across campus to demonstrate against what they see as racial insensitivity at the Ivy League school, Nov. 9, 2015, in New Haven, Conn. Image via WTNH New Haven, Conn.

EB: In brief, the incident started with a disagreement where some administrators sent out an email—Halloween was coming up—asking students to be sensitive to the fact that wearing other students’ identities as costumes can be very hurtful. They were trying to forestall things that had happened on other campuses. One professor sent out a response, saying that the administrator’s email was a bad idea—that the whole point of college is for young people to figure out how they want to be in the world and what they consider transgressive. That it should be up to students, rather than administrators, to talk to each other about what bothers them. So the professor was trying to start a conversation—but the email came across as not thinking that it was the school’s job to do anything to prevent things like blackface. All of that tipped off a much, much larger conversation about race at Yale and about the experience students of color were having and whether or not they were having the nourishing, encouraging experience that you’re supposed to have at an elite school. The initial debate about Halloween costumes doesn’t show up anywhere in the play and didn’t particularly interest me. What really interested me was the aftermath. This was something a lot of my friends were talking about and a lot of my former professors were talking about,  and I think what I got obsessed with was how badly the conversations went. How much trouble people had speaking across experiences and how much trouble people had finding any sort of balance. People sort of picked sides, and once they picked a side, they had a lot of trouble believing the people who felt differently from them could possibly have valid reasons for disagreeing. I was fascinated by how a bunch of people who really have a lot in common in terms of politics, academic background, conversational style and training could all have so much trouble having a successful conversation and an empathetic conversation. That total breakdown of communication fascinated me, and I think that really became the journey of The Niceties.

BK: You’ve written two characters from different generations and backgrounds, one a Baby Boomer and one a Millennial. Why do you think it is that there can be such conflict between these two generations?

EB: I think social media has really retooled people’s beliefs about who gets to speak up. Baby Boomers came of age in an era when Walter Cronkite got on the news every night and told you what the facts were, and Millennials are living in an era where the person on the news can say one thing, the person on the other news channel can say something else, and then 82 million people on social media can all give their own perspectives and they might all be different. So this idea that there is a truth is in question. I also think that there’s a much deeper, much more eternal thing which is that every generation has a parent-child conflict. Every generation as it comes of age claims its own perspective as the one deserving attention, and that’s always a struggle for the previous generation. Every generation of children comes of age, looks at their parents, and asks, “what god-awful mess did you create that you have left me with?” and the parents say “how can you be so ungrateful, I’ve left you with the best thing that I knew how to leave you with.” In a lot of ways, I see The Niceties as resembling a parent-child conflict. There’s something just absolutely eternal about it. Socrates famously said something like, “this new generation they have no respect, they have no manners, they don’t know how to work hard….” It’s just happening all over again, but these are two generations with two huge platforms to speak up and so we’re hearing it even more than we’ve ever heard it before.

BK: The Niceties is set in the spring of 2016. Why set it at that specific point in time?

EB: So I wrote it in the spring of 2016 and then I first sat down to do a serious rewrite after the November 2016 election. I thought about “do I want to update this story to factor in what’s happened since I wrote the first draft?” And pretty quickly I realized that I thought that that would be fundamentally untrue to the story that I had written. I didn’t want to go back and pretend that I knew what was going to happen. I didn’t want the characters to have conversations that they wouldn’t have had. There was something about that moment in 2016. We have never gotten back to the place of having some of these conversations because for a lot of people, since the election, there’s always a crisis. “What do we do this week about immigrant detention centers? What are we gonna do this week about Charlottesville? What are we gonna do this week about Iran, or this week about Israel?” We’re not actually engaging with the deeper level questions of, “what is our national story? How do we agree about where we come from? How do we fix our present if we don’t agree about our past?” We haven’t had a chance to return to those conversations that were bubbling up everywhere in the spring of 2016. To some degree, I think of Act I as being set in the past, and I think of Act II, not literally but intellectually, as set in the future. It’s the conversation we never got to have where they both sort of sit back down and say, “can we try to imagine a better version of all of this? Can we try to imagine a way forward?” I don’t think we’ve ever gotten back to imagining a positive way forward. “How do we get a more just society?” has been supplanted by “how do we avoid having a more unjust society?” The play happens in this moment frozen in time where they are both taken aback by how major the issues that they’ve opened up are, but they both have the bandwidth to engage with those issues. It’s a moment in time that we have temporarily lost and I wanted the audience to return to it. 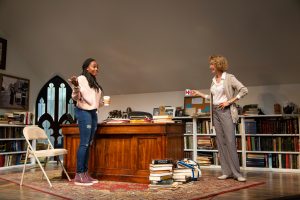 BK: You’ve had a long journey with The Niceties. The play had two developmental productions before embarking on a multi-theatre rolling world premiere from Boston to New York to New Jersey to L.A. What sorts of discoveries did you make as the play continued to be staged for different audiences in different parts of the country?

EB: I think the discoveries are almost less about the play and more about theatre itself because the biggest thing that I found was that every night was different. For a long time there’d be individual performances where I’d think, “oh my god I have to rewrite this whole section because people are really turning on this person here.” But then the next night the section worked the way I thought it would. The play played differently depending on who was in the audience every night. It played differently based on what city you were in. It played differently based on what was in the news that day. My goal was always to encompass enough parts of this real and complicated conversation that wherever audiences were, they could both see themselves represented and also learn something. I felt very proud that I basically got there in the end; no matter who is in the audience there is something for them here. On a much deeper level, I’ve learned how different theatre is from any other artform because the show is utterly transformed by the people that are in the room. They go on a journey together that is completely unique. Even though we may have the same cast and creative team, every single night was a different show. With some audience members, I sometimes said, “you know, if you’re up for it, come back in a couple days and see it one more time.” And if they did they’d sometimes write back to say that it was different and they did experience the play differently. I love that about theatre—how it is an experience created in part by the artists and in part by the audience.