Charles Dickens: The Founder of the Feast

“I have endeavoured in this Ghostly little book, to raise the Ghost of an Idea, which shall not put my readers out of humour with themselves, with each other, with the season, or with me. May it haunt their houses pleasantly, and no one wish to lay it. Their faithful friend and servant, C. D.” -preface to A Christmas Carol, 1843.

Charles Dickens had meteorically risen to fame in the 1830s with his debut work, The Pickwick Papers, and further cemented his status as one of Britain’s leading novelists with subsequent successes Oliver Twist and Nicholas Nickleby. Americans were equally enraptured by the young man’s writings and greeted him ecstatically when he visited the country for the first time in 1842. He spent several months traveling to the major cities of Boston, New York, Washington, and even as far inland as St. Louis, mobbed by fans wherever he went. 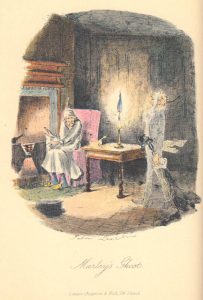 However, the novelist was soon to experience the first serious troubles of his writing career. Following his American trip, he published his impressions of the country in American Notes for General Circulation (1842), in which he praised the country for some things but voiced strong criticism for its obsession with money, its fondness for tobacco spitting, and worst of all its continuing practice of human slavery. The American response was unsurprisingly hostile, although sales of the book were strong. When his newest novel, Martin Chuzzlewit, began appearing in serialization in early 1843, it sold more poorly than any of his previous works. Talk of his new financial struggles became constant in a press eager to gossip about the now controversial figure. Dickens’s publishers even suggested he should take a cut to his £200 monthly salary to make up for their losses.

At the same time, Dickens was consumed with outrage at the conditions of the poor in England. He visited a mine in Cornwall that had a workforce of children, inspected a school in a rotting building in London, and spent hours walking the streets observing the lives of the less fortunate. While on one walk he conceived of a story that would entertain all classes and inspire a stronger spirit of generosity from those with means. He wrote it in six weeks from October to November 1843, a process in which he “wept, and laughed, and wept again, and excited himself in a most extraordinary manner,” as he wrote to a friend.

A Christmas Carol was an instant success with the public. Published on December 19, 1843, the first printing had sold out by Christmas Eve. A second and third edition were also gone by New Year’s Day, and by the end of 1844 the book was on its 11th printing. It was even popular with American readers and critics, who evidently had forgiven him for his remarks of two years earlier. Despite the immense demand, the book was not initially all that lucrative for Dickens. At odds with his publishers, he paid for the publishing himself in exchange for the entire profits of its sales. The book’s extravagant printing—gilt-edges, cloth binding with the title stamped in gold, and four wood engravings and four hand-colored etchings by illustrator John Leech—combined with the author’s insistence on an accessibly low selling price severely hindered the return on his investment. The author also saw no money from any foreign publications, since there was no international copyright law to protect his work. A year into the book’s publication, Dickens had only made £744. The book’s appeal endured, however, and it grew to become arguably his best known composition. Dickens wrote four more Christmas stories between 1844 and 1848: The Chimes, The Cricket on the Hearth, The Battle of Life, and The Haunted Man and the Ghost’s Bargain. 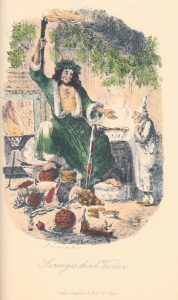 Dickens had always been interested in performing as a child and contemplated a career as an actor prior to finding success with his writing. He attended the theatre constantly and often arranged amateur entertainments where he could play a role. All of this worked to his advantage when he began to read his work publicly in the 1850s for charity. In December 1853 he was invited to Birmingham to read some of his Christmas writings. Dickens performed a reading of A Christmas Carol twice, requesting that the final performance be reserved for “two thousand working people—stipulating that they shall have that night entirely to themselves.” The readings went over extraordinarily well and Dickens continued to read for charity events for the next five years. In 1858, he began to professionally read his work for a fee. The demand for Dickens to read A Christmas Carol in particular was immense and he made a lot of money this way touring around Britain and Ireland. In 1867, he triumphantly returned to America for a four-month reading tour. Ill health prevented the author from keeping an engagement in Chicago; the Tribune called him “a Hypocrite of Literature” in retaliation.

Dickens read the story of Scrooge for the last time on March 15, 1870 as part of what he announced would be his farewell tour as a professional reader. At his final curtain call, he addressed the crowd by saying: “In this task, and in every other which I have ever undertaken, as a faithful servant of the public, always imbued with a sense of duty to them, and always striving to do his best, I have been uniformly cheered by the readiest response, the most generous sympathy, and the most stimulating report.” He died three months later at the age of fifty seven.