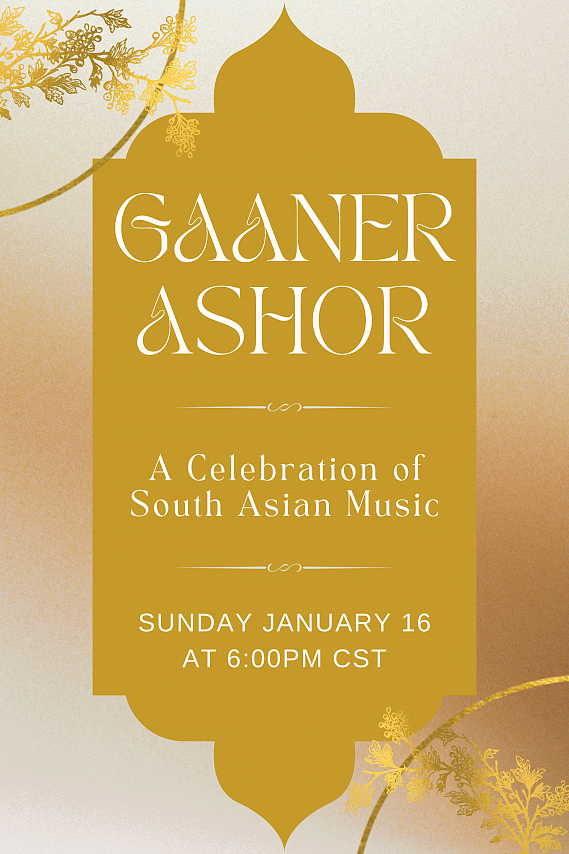 Location: 325 Tudor Court | Get Directions ›
Theatre: Alexandra C. and John D. Nichols Theatre
Buy Tickets Donate Now
The Bengali term “Gaaner Ashor” translates literally to “meeting of the song” and refers to an informal musical gathering where everyone is welcome to join, whether they want to participate or watch.

This concert will feature Avirodh Sharma (the composer and musician for DISHWASHER DREAMS), Lyon Leifer (member of the South Asian Classical Music Society), Palbasha Siddique (Bengali vocalist and founder of the group MOYNA), and Durjoy Siddique (Bengali guitarist and member of MOYNA). These international artists will be presenting classical, folk, and popular Bengali music with traditional instruments, including the Tabla and Bansuri.

Can't attend in person and would like to stream the show directly to your home instead?

We've got you covered! Gaaner Ashor will also be live streamed the night of the performance from Overture+, our digital streaming platform. Click here for more information and tickets for our live streamed version of the show!

This is a special, one night only concert event happening on January 16th, 2022. 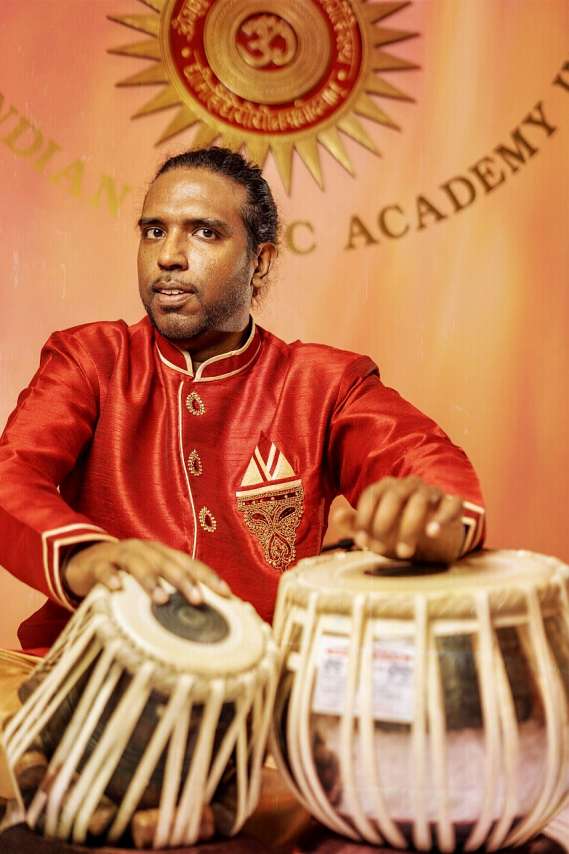 Avirodh Sharma is considered one of today’s leading exponents of the tabla, carrying on the tradition of percussion rhythm that originated on the Indian Subcontinent. Trinidadian born, Sharma was trained by his father, Dr. Ravideen Ramsamooj, managing director of the East Indian Music Academy who, together with his mother, Bharati Ramsamooj (Principal), have produced over 20,000 students in New York City. As a Director/resident teacher at the Academy for over 24 years, Sharma has trained tabla players nationwide. A multifaceted artist, he is also a composer and producer, with work featured in films, documentaries, fashion shows, on radio and in television commercials. He has been featured in The New York Times, NY Daily News, NY1, TV Asia, STARZ NETWORK, Zee TV and NPR Radio. Sharma has worked with Grammy-winning artists including Shakti and Masters of Percussion - Vikku Vinayakram - internationally acclaimed Kailash Kher, Suresh Wadhkar, Shivamani, Amaan and Ayaan Bangash and many more. He has also collaborated with Asian Underground musician Karsh Kale, fiddler Patrick Mangan (Riverdance), dance choreographer David Parsons and David Bowie’s drummer Sterling Campbell. He’s also made special appearances in music ensembles such as the Queens Symphony, Sukarma, Sufiana, Riyaaz Qawaali and Melodic Intersect. In 2015, his debut recording as a tabla soloist/percussionist was nominated for the 14th Independent Music Awards “Best World Beat Album.” In 2018, he was commissioned by Parsons Dance Company to compose and perform Microburst in NYC’s Joyce Theatre, receiving critical acclaim in Italy and across the United States. He composed and performed for Dishwasher Dreams which was developed at the Joseph Papp Public Theater. A Carribean Savant in rhythm, his performances have captivated audiences in Italy, Switzerland, Nepal, India, Dominican Republic, Bahamas, Trinidad and Tobago, Guyana and the U. S. January 2019, he performed at Kumbh Mela, in India, the biggest religious festival in the world, where millions were in attendance. He has appeared recently at the international festivals Artisti in Piazza (Italy), Hindustani Music Fest (Bahamas), Drive East Festival (New York City) and Taj Mahotsav (Taj Mahal, India). 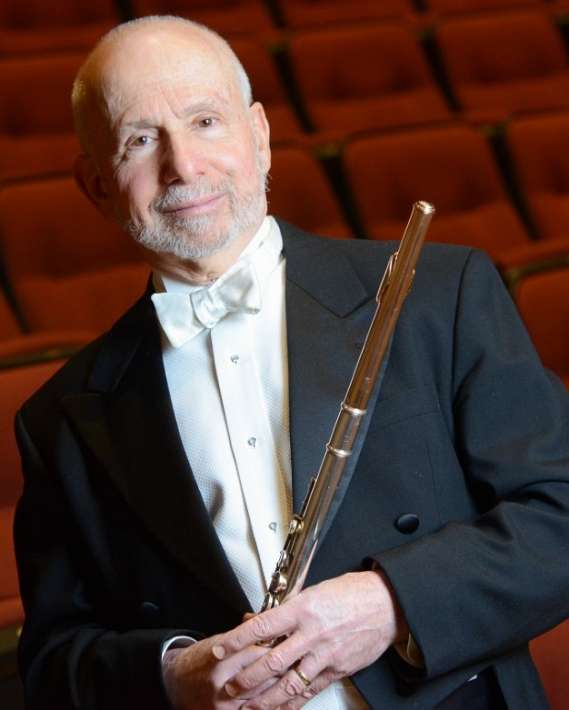 Lyon Leifer is deeply experienced as a flutist and teacher in Hindustani and Western classical genres. He performed as a member of the St. Louis Symphony after graduating from Juilliard. He left St. Louis to accept a Fulbright to India and learned bansuri there for five years under guidance of Pt. Devendra Murdeshwar. That learning continued when possible until the master’s passing in 2000. At home in his native Chicago, Lyon performed as a long-time principal at Music of the Baroque, Chicago Opera Theater and Ars Viva, and also subbed in the flute sections of the Chicago Symphony and the Lyric Opera Orchestra. He also founded the South Asian Classical Music Society of Chicago, which presents genres of the subcontinent and featuring important visiting and local artists as well as producing student concerts, in collaboration with local teachers. Lyon has given bansuri recitals in venues across the US and India and performed internationally on bansuri in Manchester, Birmingham, Caracas, Vientiane, Hanoi, Havana, and Shanghai. During late 2019-early 2020 he was again in India on a Fulbright-Nehru Research Grant, comparing contemporary approaches to bansuri. At that time, he gave bansuri recitals in Mumbai, Mysore, Bangalore and Kolkata. He’s scheduled to begin the second phase of the current project in India in February, 2022. 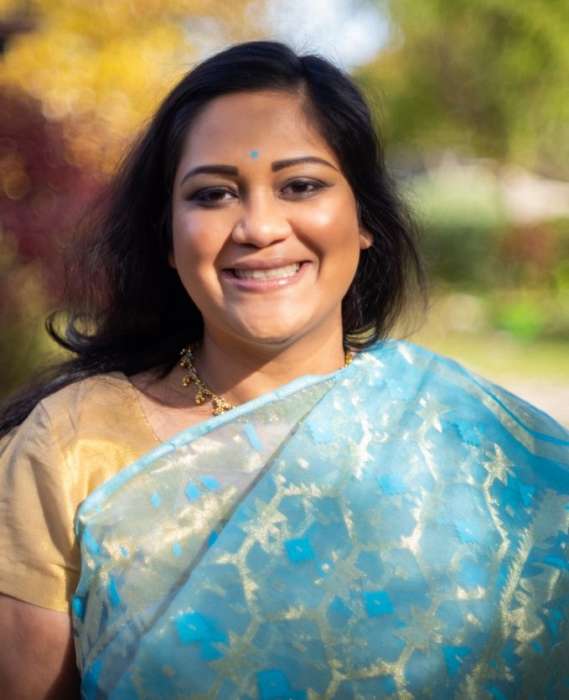 Palbasha Siddique is a Bangladeshi-American singer. She is best known for her performance of Praan, a song adapted from the collection of poems Gitanjali by Rabindranath Tagore, with music composed by Garry Schyman for Matt Harding's "Dancing 2008" video. She has performed in a variety of music styles both in the US and Bangladesh and performs in both English and Bengali with her husband as the duo Moyna. 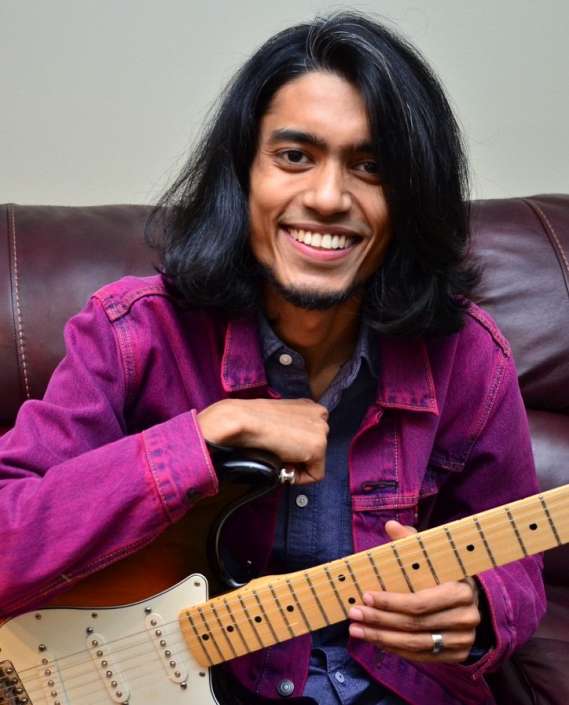 Durjoy Siddique has been playing the guitar for the past twelve years since he was in college. He is heavily influenced by the music of his native Bangladesh and Western rock music. He only began performing in 2017 as part of the duo Moyna with his wife Palbasha. He is currently pursuing his post-doc at Argonne and plays music with his wife for pleasure.

Avirodh Sharma - featured in this concert - is the composer, arranger and musician for our current production of Dishwasher Dreams. For more information and tickets for Dishwasher Dreams click here! 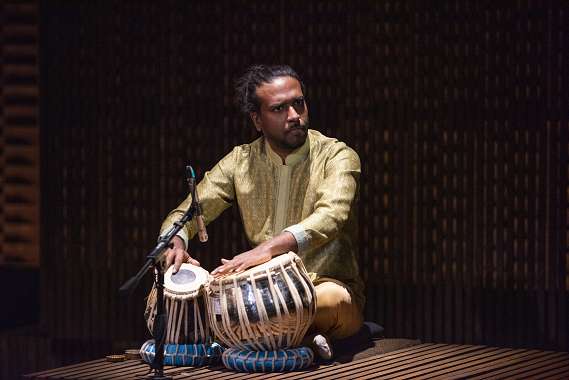