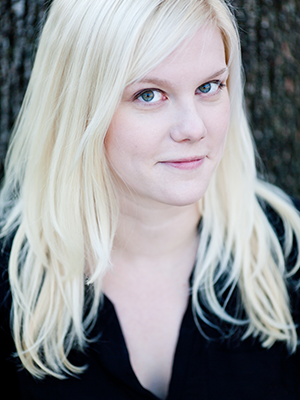 Charlotte Long is a Chicago native interested in the desert, the archive, death and rebirth cycles and pioneer women. Having graduated from Sarah Lawrence College in 2012 with degrees in Literature and Performance, her artistic work of the past 8 years has threaded together her initial love for dance with her inability to ignore the written word. As a puppeteer with Manual Cinema since 2013, she has had the immense privilege of touring the world with them and considers Manual Cinema the heart of her Chicago Performance world. Over the years, she has performed in the shows Ada/Ava (Aba, puppeteer), Lula del Ray (Lula), Hansel & Gretel (puppeteer), My Soul's Shadow (puppeteer), The Blow Up Bra (young Betty) and many wild animation and video projects. Her first role with Manual Cinema was in the original Mementos Mori as a slightly spookier version of Aunt Francesca. Favorite venues with Manual Cinema include Under the Radar Fest at the Public Theater in New York, the Museum of Contemporary Art, Saudi Arabia, Czechia, all over the Netherlands, China, Taiwan, Canada, Berlin, and teaching Manual Cinema workshops at Universities all over the United States. Other non-puppet related Chicago theater favorite credits include Lifeline Theater, the Plagiarists, the Neo Futurists, Rough House, Red Tape and the 90's classic TV show Early Edition. In Chicago, she has performed solo movement and comedy at Research Project, Beauty Bar, Junior Varsity and Mana Contemporary. Her prose writing can most recently be seen in the second issue of Stonefruit Mag.Together with her long time mentor, she has co-run the performance and storytelling camp ESIC for over a decade, producing plays and music written by the young campers. Charlotte leads social justice and community service curriculum with teenagers in the suburbs.