The United States Institute for Theatre Technology, Inc. (USITT) has announced their Architecture Awards featuring Writers Theatre as one of the top three honor winners for 2017! The Architecture Commission will present the awards at the Annual Conference & Stage Expo Friday March 10, 2017, 5:30pm-8:30pm in St. Louis. 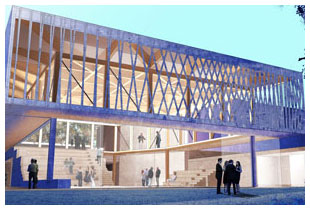 USITT noted in their January announcement: “Writers Theatre designed by Studio Gang Architects increased capacity while maintaining its trademark intimacy and the close audience-performer connection found in their original smaller spaces. The design team realized this goal by working collaboratively to create new, technologically advanced performance spaces that are still reminiscent of the theater’s former venues. While the size of each venue was effectively doubled, they remain as intimate and immersive as Writers’ original spaces.”

USITT is a national non-profit association for the live entertainment production industry. It provides hands-on learning, mentorship, and networking opportunities for emerging and working professionals in the backstage arts. Its Annual Conference and Stage Expo is the only complete production event in North America, featuring over 250 training sessions and 280 exhibitors of the latest tools and resources for creating live entertainment.