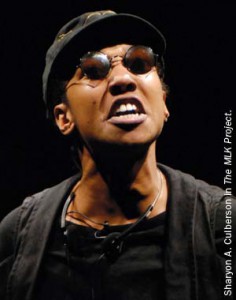 This has been an exciting year to be touring a show about the Civil Rights Movement to schools. We kicked off the tour on January 19 (Dr. Martin Luther King, Jr. Day) and continue to tour

The MLK Project through the end of February. This year, the election of the first African American President has brought Dr. King’s dream and the Civil Rights Movement back into our national dialogue. Many students see this past election as an important step in our continued fight for civil rights in this country and they enjoy discussing what might be next.

One of the most interesting things about bringing The MLK Project into schools is that you never know which parts of the play are going to be of most interest to students. Some students are most interested in the production and what it takes to rehearse and stage a play, some want to discuss the shooting of Dr. Martin Luther King, Jr., or the poetry and music used in the performance. Each school has a new group of students with their own interests and ideas, which is the most exciting part of working on a touring production.

One particular story that students ALWAYS want to discuss is that of Emmett Till.

There are many students who attend The MLK Project who have never heard about how Emmett Till at the young age of 14 was viciously beaten and murdered for saying hello to a white woman in a store. There are so many reasons that I think this section of the play stands out to students not the least of which is that they are all about the same age as Emmett was when he was murdered.

Recently we were engaged in an incredible post-show discussion after a performance of The MLK Project at a school on Chicago’s far south side when a teacher raised her hand and commented, “I’m actually related to Emmett Till. My father’s first cousin was in the house with Emmett the night that the white men showed up and took him away from the house and killed him. That is something we have always had trouble talking about in my family. Until very recently we did not discuss what happened to Emmett when he was killed that night. I just want to say thank you for sharing this today. It may not be easy but we all need to hear these stories so that we can keep moving forward.”

It is wonderful to think about how far we have come in the past few decades, especially in the light of our recent, historic presidential election. But it is easy to forget how much more work there is to be done. I’m proud to be able to share The MLK Project with students so that we can “keep moving forward.”