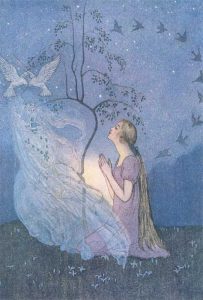 What is a fairy tale?

The Czech writer Karel ˘Capek writes that “A fairy story cannot be defined by its motif and subject-matter, but by its origin and function… A true folk fairy tale does not originate in being taken down by the collector of folklore but in being told by a grandmother to her grandchildren, or by one member of the Yoruba tribe to other members of the Yoruba tribe, or by a professional storyteller to his audience in an Arab coffeehouse. A real fairy tale, a fairy tale in its true function, is a tale within a circle of listeners.” [1]

One of the paradoxes of storytelling is that, on the one hand, a story is different every time you tell it and you can make it mean anything you want it to mean. On the other hand, there are no truly new stories. With Into the Woods, we have a story about storytelling: it tells us stories we already know and asks what they mean, what work they do for us, why we keep telling them and for whom.

The four fairy tales that make up the main plot of Into the Woods—Cinderella, Rapunzel, Little Red Riding Hood and Jack and the Beanstalk—are based on specific, nineteenth-century literary tellings. However, as Sondheim points out in his notes on the musical, “the tales we were dealing with exist in virtually every culture in the world.” Cinderella, in other words, is not just Cinderella, but also Aschenputtel (German), Ye Xian (Chinese), Chinye (West African), Rashin-Coatie (Scottish), Himegimi (Japanese), Mireleh (Ashkenazi Jewish), Domítíla (Mexican), Settareh (Persian), and many hundreds more. [2] The details of these stories might vary (the German Cinderella is helped by a magic tree planted on her mother’s grave, the Chinese Cinderella by a magic fish and then by the dead fish’s magic bones) but the human experiences they describe (a girl is rescued from her abusive family to live in luxury and happiness) remain constant. 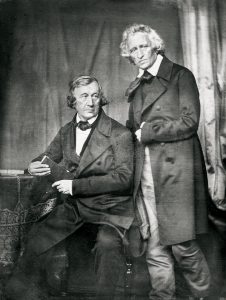 There are two schools of thought as to why stories like Cinderella appear in so many different cultures: either all versions of a story are connected to a single, ancient version, which was disseminated orally and altered to suit the cultural circumstances of each storyteller, or fairy tales describe human experiences so universal that they are developed independently in every time and place. There is probably some truth to both of these proposals. A good story is durable. The folklorist Graham Anderson explains, “if a story is a genuine folktale or fairytale it will maintain most of its structure, intrinsic logic and basic identity for centuries or millennia on end. In the world of traditional storytelling…I have yet to encounter a wolf trying on the glass slipper.” [3] A story that feels right will keep feeling right even as the world around those who are telling it changes.

But how can a story “feel right” to such a wide variety of listeners? In his notes on Into the Woods, Sondheim writes that he and Lapine were inspired by the explanation offered by psychoanalyst Carl Jung’s notion of the collective unconscious, [4] and specifically the idea of universal archetypes. Fairy tales deal exclusively in archetypes: the Monster in a fairy tale is every monster, the Child in a fairy tale is every child. In the system used by folklorists to categorize types of stories, Rapunzel is called “The Maiden in the Tower,” Cinderella is “The Persecuted Heroine” and Jack and the Beanstalk is “The Boy Who Stole the Ogre’s Treasure.” [5] Sondheim explains that this universality is why he has resisted symbolic readings of Into the Woods: the giant in this story does not stand in for “…AIDS…the atomic bomb, global warming or the economic meltdown. To me and James, it is a giant. Enough said.” The Jungian critic Marie-Louise von Franz writes that “the fairy tale itself is its own best explanation; that is, its meaning is contained in the totality of its motifs connected by the thread of the story.” Fairy tales are not metaphors, but something simpler. They are the stories we tell in order to make real life make sense.

That said, although you know these stories, the versions you are familiar with are probably a little different from the versions you see on stage tonight. Why is Cinderella talking to a tree, where did her pumpkin coach go and what happened to Little Red’s riding hood? Some of the show’s unfamiliar elements come from the minds of Stephen Sondheim and James Lapine—The Baker and his Wife are entirely original characters—but many more are owed to another iconic writing duo: the Brothers Grimm.

Jacob and Wilhelm Grimm (1785-1863 and 1786-1859, respectively) were not the first scholars to collect folktales in a written anthology, however, what made their collection Children’s and Household Tales original was its fidelity to the traditional forms of these stories. The Brothers Grimm were deeply interested in documenting the literary traditions of a German folk culture which they saw as threatened by rapid industrialization. In his introduction to the first edition of Children’s and Household Tales, published in 1812, Wilhelm Grimm wrote that “[it] is probably just the right time to collect these tales, since those who have been preserving them are becoming ever harder to find.” 6 This conservationist attitude meant that the Grimms had no qualms about leaving in details that other fairy tale writers have found unsavory (or, well, grim) such as the moment when Cinderella’s stepsisters cut off pieces of their feet to try to get her shoe to fit. 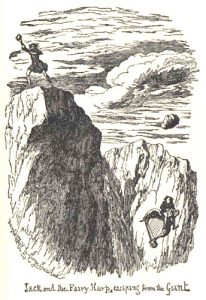 In part because of Disney, and in part because of the modern distaste for dismemberment in children’s stories, the versions of these tales that most Americans are familiar with come not from the Brothers Grimm, but from French author Charles Perrault’s 1697 collection Histories or Tales from Past Times, with Morals. Despite the prevalence of Perrault’s versions, his tellings are actually far from the traditional oral versions of the stories on which they are based. Perrault wrote for an aristocratic, literary audience of both adults and children, during a period when retellings of folktales had become fashionable among the upper classes. Far from being an archivist of folk culture, Perrault emphasized préciosité, or refinement, in his writing. [7]

This difference in attitude is particularly clear in the differences between Perrault’s “Little Red Riding Hood” and the Grimms’ “Little Red Cap.” Whereas Perrault’s story ends with Little Red Riding Hood’s death followed by an injunction not to talk to strangers, the Grimms’ Little Red Cap is not only rescued from the wolf’s belly, but manages to kill the next wolf who comes her way. Likewise, as Sondheim points out, Perrault’s Cinderella is forced to leave the ball by the stroke of midnight or else be exposed as a fraud, but the Grimms’ more active Aschenputtel chooses to run away of her own accord. The question of why Cinderella might choose to run away from the thing she most wants was the inspiration for much of her characterization in Into the Woods.

However, the difference between Perrault and the Grimms is not all due to the latter’s interest in preserving tradition. The Grimms were also deeply concerned with making their stories morally instructive to children. While the violence in their stories may be shocking to modern parents, stories of misbehaved children coming to gruesome ends were very popular among nineteenth century parents and educators. The Victorians believed that all children were born wicked, stained by the curse of original sin, and had to be taught to be good with a pedagogy of fear. “Cautionary tales” for children were popular, and could be even more gruesome than the Grimms’ stories: a 1907 parody of the genre entitled Cautionary Tales for Children: Designed for the Admonition of Children between the ages of eight and fourteen years included titles like “Jim: Who ran away from his Nurse, and was eaten by a Lion” and “Matilda: Who told Lies, and was Burned to Death.”

The Grimms managed to produce a collection of tales much closer to the traditional oral versions than any of the previous written folktale collections, even if their versions were not as authentic as they claimed. Many of their stories are not uniquely or even originally German. And anyway, what would it even mean to tell an authentic or “correct” version of a fairy tale? Despite the Grimms’ dishonest claim that the stories in their collection are unique to Germany, trying to divide fairy tales along national lines is a misguided project. In the words of Angela Carter, “Who first invented meatballs? In what country? Is there a definitive recipe for potato soup? Think in terms of the domestic arts. This is how I make potato soup.’” [8]

Despite the cultural fluidity of these stories, the Grimms’ effort to create an archive of specifically German stories began a tradition of national collections of fairy tales which has continued to this day. Jack and the Beanstalk, the only story in Into the Woods not found in the Grimms’ book, comes from one such collection, the 1890 book English Fairy Tales by Joseph Jacobs. While it is true that the story about a beanstalk that serves as a ladder to the sky and a giant who says “Fee Fi Fo Fum” is unique to the British Isles, Jack and the Beanstalk is only one example of the widespread folktale type “The Boy Steals the Ogre’s Treasure,” which exists in dozens of cultures.

Fairy tales, then, operate on two levels: on the one hand, they are immediate because they represent the particular interests, anxieties and cultural mores of the moment in which they are told; on the other hand, they express human experiences so succinctly and timelessly that they continue to have meaning for each new generation. In rewriting these stories, Sondheim and Lapine have stayed true to their nature, which is to change. As the critic Carolyn Heilbrun writes, “Out of old tales, we must make new lives.” [9] 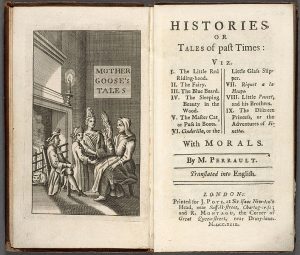