The Niceties is set in the office of Janine, a history professor at an elite university in the northeastern United States. Hanging around Janine’s office are five portraits, each depicting a person or moment in history that she deems revolutionary. The subjects pictured span centuries, continents, and causes and are often featured by Janine in her courses.

One is a picture of Lech Wałęsa, a Polish labor leader at the head of the Solidarity movement in the 1970s and 1980s. His activism culminated in the Gdansk Agreement of August 31, 1980, which gave Polish workers the right to strike and organize as unions. He was elected Solidarity Chairman of the First National Solidarity Congress in Gdansk, before it was suspended by Polish General Jaruzelski in fear of a Soviet invasion, which also landed Wałęsa in internment for almost a year. In 1983, he was awarded the Nobel Peace Prize, which helped force Jaruzelski back to the negotiation table with activists and to reinstate the Solidarity labor union. In 1990 at the Second National Congress, Wałęsa was again elected Chairman of the Union, and later that year elected President of the Republic of Poland, the country’s first democratically elected leader. He served in that capacity until 1995 and is still living today. [i] 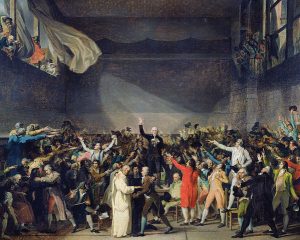 Another painting shows a large group of 18th century men crowded onto a tennis court with an argumentative and passionate energy. This is a visual depiction of The Tennis Court Oath, an instigating agreement to begin the French Revolution on June 20, 1789. France’s pre-revolutionary government was a three-tiered system called the Estates-General. There were representatives from a noble tier, a clergy tier, and a third tier which encompassed the vast majority of French citizens. Understanding that the concerns of the poor and underprivileged were being outvoted 2-1, the representatives of the masses decided to form what they called the National Assembly on June 17th. When the newly formed National Assembly attempted to enter the Estates-General meeting on the 20th, they realized they were locked out in an attempt by the king and nobility to bully them into compliance. Instead, they congregated in an indoor tennis court and swore to one another to stay united until the country had a written constitution. One week later, the King relented and made the other two tiers’ representatives meet in the first National Assembly. [ii] 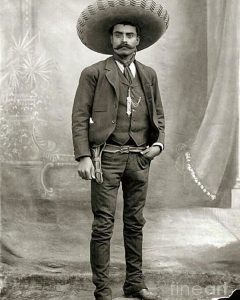 The black and white photo of a man dressed in military garb shows Emiliano Zapata, a Mexican revolutionary who fought during the Mexican Revolution and was a fierce advocate of agrarian reforms. Beginning in 1910, he led a guerrilla army to help depose Porfirio Díaz, a dictator, and reinstate Francisco Madero as the new president. However, his insistence that Mexico return to indigenous land-owning practices called ejidos (as opposed to private property) was rejected, and the national army turned on his guerilla fighters. Zapata created the Plan of Ayala, which declared Madero unfit for the revolution’s goals. He continued to fight leader after leader until he was ultimately ambushed and killed by an undercover member of the government army in 1919. [iii] 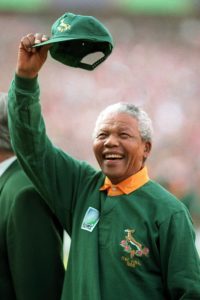 A perhaps more immediately recognizable figure, Nelson Mandela was a South African revolutionary who was most famous for spending 27 years in prison on a life sentence for “treason”—advocating for the civil rights of the black population of South Africa during apartheid. Mandela then became the nation’s first black president in 1994. His work both in and out of the official governmental sphere had a lasting socio-political impact on South Africa.[iv]  This picture shows him in the green and yellow uniform for the Springboks, the South African national rugby team. Historically, the team had been a cultural staple of white Afrikaaners and disdained by black South Africans. However, in 1995 Nelson Mandela appeared at the World Cup championship game wearing their uniform in a symbolic move to unify a divided nation, and the incident is believed to have contributed to the Springboks’ shocking upset victory over the New Zealand All Blacks. [v] 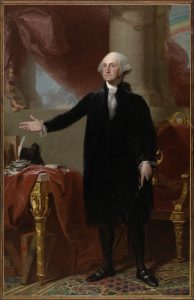 And finally, the most iconic visage in America and the painting most referenced in the play is the one of George Washington. Commander in Chief of the Continental Army during the Revolutionary War (1775-1783), Washington presided at the Constitutional Convention of 1787 and then served as the first president of the United States of America from 1789-1797. Washington is revered by Janine for his role in shaping the presidency into its current form, limiting the functions and reach of the American government, and willingly handing over power after serving two terms in office. At Mount Vernon, Washington’s plantation home in Alexandria, Virginia, he also owned over 300 slaves. [vi]

Janine’s portraits are meant to inspire her students by celebrating people who changed the world for the better, in her opinion. However, as becomes clear in The Niceties, her views of these figures are not necessarily shared by everyone.