Notes from the Rehearsal Room—VIETGONE #2

It’s day one of tech for Vietgone. Four weeks since the cast began working in the rehearsal room. And I’m thinking about ninja.

Not the black-clad assassins popular in martial arts films, mind you, despite playwright Qui Nguyen’s penchant for mining kung-fu flicks and Japanese anime for inspiration (and one particular scene in the play because, hey, SPOILERS). I’m talking the literal translation of the word, which is “one who is patient” or “one who perseveres.”

It’s not just that tech (which for the sake of my parents and others not in the know is short for “technical rehearsal”) demands both patience and perseverance, though it certainly does. Much of the theatrical magic on display today is moving at a slow-motion pace. Sitting about me in the darkened house of the Nichols Theatre are the designers and operators hard at work turning the cross- and multi-country settings (and times) of Nguyen’s text into a tangible onstage reality. Tables temporarily straddling chairs destined for patrons create a Mission Control landscape of tiered workstations covered by laptops, cords and equipment, with hovering faces illuminated by desk lamps and monitors as light and sound cues are programmed to underscore and enhance the action. Composer Gabe Ruiz is present, tweaking or fixing the show’s pulse-pounding raps, while conferring with sound designer Kevin O’Donnell on the overall aural landscape, which will include 70s pop tunes, rat-a-tat gunfire in war-torn Saigon, and the roaring motorcycle of the play’s central road-trip narrative. 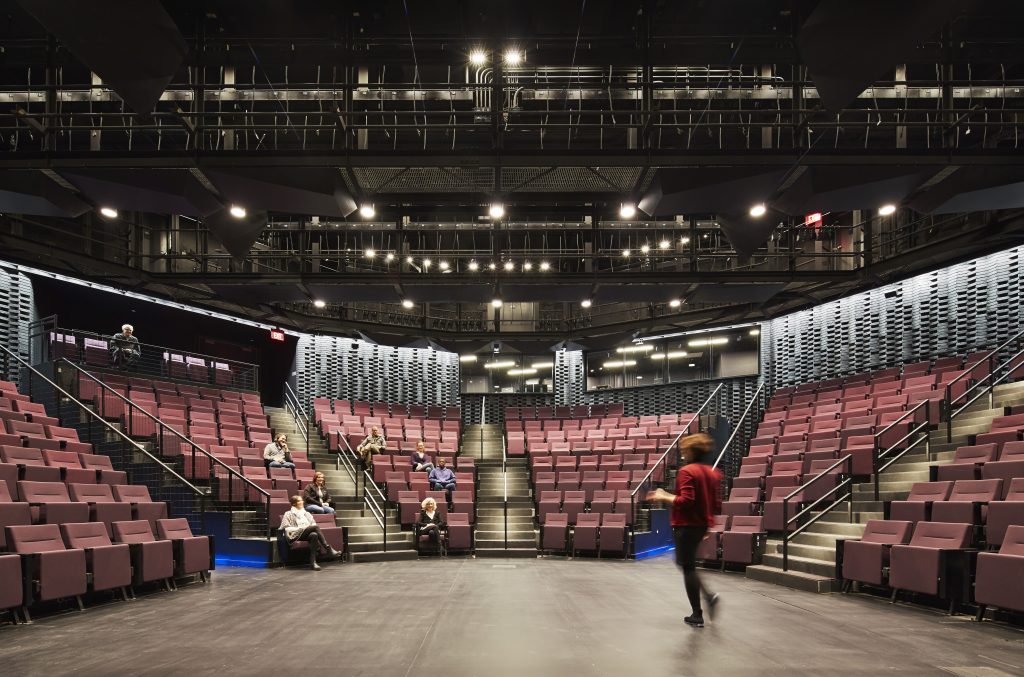 Overlapping chatter abounds, but is kept to a low, non-disruptive professional volume and mostly mouthed into mikes and received via headsets. The loudest sounds (other than those in the show) are “Ready” and “Hold” from stage manager David Castellanos as he calls for things to start or stop. Something (or someone) needs to be moved for sightlines, lights added or subtracted, entrances/exits timed and re-timed. Projections designer Rasean Davonte Johnson (decked out in a Star Trek: The Next Generation hoodie) checks on images to be beamed onto set designer Yu Shibagaki’s towering backdrop, while assistant stage manager Janelle Boudreau deals with a recalcitrant wheeled bed refusing to roll into place. Adding to the sense of busyness are scattered coffee cups, empty food containers and half-consumed snacks attesting to everyone keeping up their energy through the first of many twelve-hour days.

Throughout this process, the cast remains game, as director Lavina Jadhwani and choreographer Tommy Rapley observe their work. Sometimes quietly from the house, arms folded or hands in pockets in concentration; other times conferring directly with the actors. During periodic downtimes 1970s lovers Quang (Matthew C. Yee) and Tong (Aurora Adachi-Winter) are glimpsed checking some very non-period cell phones, while at another point, actors Rammel Chan and Ian Michael Minh improvise a Harry Potter wizard duel with some chopsticks. Everyone finds ways to be patient and persevere in their own way. 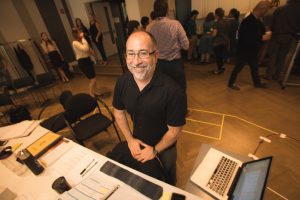 But more than that, much more than that, I find myself thinking about the play’s real ninja: its central characters and their real-life equivalents. About the scores of Asian immigrants who came here as refugees, whether from battle-strewn Vietnam, Cambodia or Laos, or even those who arrived under more fortunate circumstances, and struggled to build new lives for themselves. Like Quang, Tong, Nhan and Huong, many experienced loss, dislocation, and isolation. If they were lucky, it might just be a matter of language or unfamiliar food and surroundings. For the not so lucky: discrimination or even racial violence. Yet, as testified by the presence of their second and now even third-generation descendants, many have survived and even prospered. And thanks to their patience and perseverance, you might encounter more than a few who are now enjoying, as one Vietgone character puts it, “boring, everyday shit.”

One of the things I admire most about Vietgone, and that makes me proud to be involved in this production (even in my small capacity) is that while it aims to use its combination of humor, music and action to entertain the audience at north suburban Writers Theatre, far removed from the painful (and occasionally joyful) events that inspired it, it never loses sight of the fact that “boring, everyday shit” is a hard-won gift and luxury. Especially for those who end up in this country under situations extreme and unwanted.

Anyway, there are ninja in Vietgone.

All over it, both within and without.

Which soon, very soon, you can see and experience in real time.