Notes from the Rehearsal Room—A NUMBER

As we are looking at our final days of rehearsal for A Number and preparing for our first audiences, I have been thinking about some of the themes of this play and what the audience will take with them to mull over when they leave the theatre. Caryl Churchill’s complex script has been deeply rewarding to dig into throughout the past few weeks. She’s gifted us with endless moments to explore and countless discoveries to be made.

A Number takes us inside a parallel world, where medical advancements have far surpassed those we have seen to date, and where not enough people have paused to consider the consequences of their actions or to ask, “Just because we can, does it mean we should?”

The play centers around the tenuous relationship between a father and son. The father, Salter (William Brown), struggles to explain choices from his past to his now-grown son, Bernard (Nate Burger). Bernard attempts to decipher whether or not he should hold his father responsible. He asks if any of us have actual control over our decisions, or if our genetic makeup and upbringing plays the larger role in who we eventually become.

Watching these characters wrestle with tough questions surrounding the origin of their identity has given those of us working on the play a lot to think about. I was especially struck by the way Churchill illustrates how deeply we have the ability to impact and be impacted by the people in our lives, for better or worse. We leave an imprint on one another even through our smallest interactions.

This rehearsal room has been a joy to be in, everyone both on stage and behind the scenes has worked hard to bring these fascinating characters to life and we are excited to share this play with an audience soon. I hope if you are able to join us for a performance, that you take a moment to reflect on the imprint you leave on both the people in your life and in the larger world around you. 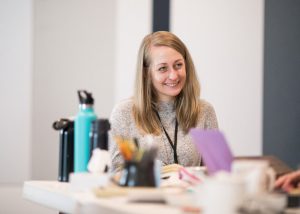