JEN SILVERMAN: A Homecoming to the Theatre

After making a strong foray into writing for television, the playwright of Witch is back to write for women on stage.

“I think of Witch as a dark comedy, even though the original play is a medley of tones: cautionary tale, slapstick comedy, morality play,” says playwright Jen Silverman. “It was important to me to reckon fully with the darkness of the original, while bringing to it a rich vein of character-driven comedy.”

Playwright Jen Silverman grew up all over the world. Her father was a physicist who taught and researched for several foreign universities. Though both trained as scientists, Silverman’s parents loved to read and passed that love onto their daughter. “Growing up our house was full of books, so I was always reading,” she notes, several weeks before starting rehearsals for Witch. “I knew I wanted to write, and I knew that telling and reading stories was the most exciting thing to me. But it wasn’t until undergrad that I stumbled into theatre.” While at Brown University, Silverman was pursuing a Comparative Literature major and under the assumption she would try to be a novelist. But a randomly chosen playwriting class “brought [her] over to the dark side” and she knew what she wanted to do with her life. But first, Silverman moved back to Japan, where she had moved with her parents when she was a child but hadn’t visited in a decade. She spent her time abroad writing plays and honing her craft. “At a certain point, I realized that I wanted to participate in the making of theatre, not just the crafting of texts,” she says. After moving back to America, Silverman attended the MFA Playwriting program at the University of Iowa. For the first time, she had access to true professional collaborators and theaters to see her work brought to life. “Put your work up, see if it fails, see if it works, learn from it,” she says as a summary of what the program at Iowa gave her the opportunity to do. 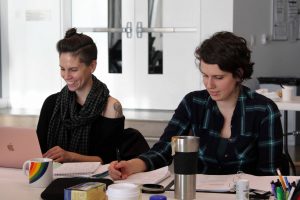 After a few years of living in New York, writing more plays and making important connections—including with director Mike Donahue, who would direct many of Silverman’s plays— the playwright’s big break came in 2015. Actors Theatre of Louisville had read a first draft of her unproduced play The Roommate and decided to stage a full production of it as part of their Humana Festival of New American Plays. “I mean, they just took a huge risk on me. We had no prior relationship,” she confesses. The risk paid off and The Roommate was a big success, going on to receive several more major productions, including one this past summer at Steppenwolf Theatre Company. This opened more doors for the rising writer, and she had another two plays premiere within the next year and half: The Moors at Yale Repertory Theatre in New Haven and Collective Rage: A Play in Five Betties at Woolly Mammoth Theatre Company in D.C.—both of which were also well-received and enjoyed multiple productions.

One remarkable thing about Silverman’s plays is that she writes about women—often women over the age of 40—with an appreciation and authenticity that is rarely seen on stage. “In those plays, there is such a conversation about women and visibility and intimacy,” explains Silverman. “Whether it’s in The Roommate where this 55-year-old woman suddenly realizes that she has been rendered invisible in the world in a way that she’s not comfortable with. Or in The Moors, all these characters are living in this super isolated place, and they are trying so hard to be seen clearly and correctly by each other. And it’s the desire for visibility that leads to some of the drastic acts that end the play. And in Collective Rage it’s about these five women who have all been seen in a very particular way, they’ve been told who they are. And their journey through the play is about both figuring out and deciding who they’re going to be that isn’t the thing that’s been put on them.”

Several years ago, Silverman was reading Stacy Schiff’s The Witches: Suspicion, Betrayal and Hysteria in 1692 Salem. She found that era of witch hunting enthralling because of “the powerful mix of mysticism and constant ambiguity, the unknown of living in that time period. People would just die and it’d be like, ‘why did they die, we don’t know, Western medicine isn’t advanced at all, so maybe Satan killed them.’ Anything could happen at any moment. And there’d be no explanation for it other than God. So the combination of an explosive and uncertain time plus the way these girls had been repressed, repressed, repressed to a breaking point—reading that history was a really powerful thing for me. It doesn’t feel like we are so far removed from that combination of things.” 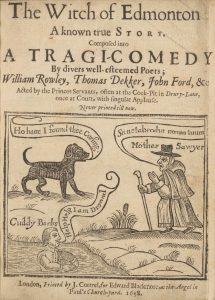 Soon afterwards, she ran across a play from 1621 called The Witch of Edmonton by Thomas Dekker, William Rowley and John Ford, and was equally captivated.“The original play is subversive because it pays constant lip service to the good people of this town – but then every action you see them take onstage is really shitty,” Silveman says. “And the ‘witch’ is not even a witch. The play keeps being like, ‘she is an evil witch’ and people keep saying to her ‘you’re a witch’ but when finally she defends herself, she’s like ‘I wish I was a witch, if I was a witch I would never put up with this behavior from you.’ She becomes a witch because they make her that way. And you sympathize with her, and the play means you to. It tells you it’s doing one thing but actually dares to do the opposite thing.”

The Witch of Edmonton stuck with her, and when Silverman started having conversations with Writers Theatre and learned about the Theatre’s affinity for classic works, she pitched a new version of the Jacobean classic. Witch maintains the old world setting and characters, but explores it all with 21st century language, emotional complexity and a generous dose of humor. “There’s a safety in using that kind of distance to talk about disempowerment and visibility and anger and despair,” admits the playwright. “And I think it’s a necessary safety because we are bombarded by so many stories right now in the news and in the media that are just emotionally draining and horrible and upsetting and I understand why an audience doesn’t want to sign up to go to a theatre and be bombarded by things that upset them. I can’t blame them. So it feels to me that, maybe this is my bent in general, but particularly in this country and in this moment, I think comedy is such a powerful weapon. Or, if you will, a powerful invitation to say ‘I will take good care of you, audience, you will have a good time, it will be okay, but we’re going to talk about some really tricky things, and we’re gonna look carefully at some really tricky things, but we’re gonna do it in a way that doesn’t damage you.’” 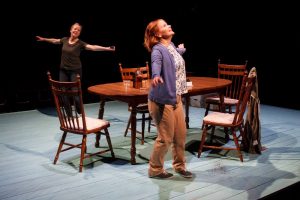 Tasha Lawrence and Margaret Daly in The Roommate by Jen Silverman at the 2015 Humana Festival of New American Plays. Photo by Bill Brymer.

Writers Theatre connected with Silverman just in time, because her star has continued to rise. After focusing solely on theatre for a decade, the writer has been branching out into other media with incredible dexterity and success. She worked on the writing staff for Tales of the City, a TV series for Netflix adapted from Armistead Maupin’s book series, which stars Laura Linney, Olympia Dukakis and Ellen Page and will debut in 2019. Additionally, her collection of short stories The Island Dwellers was published by Random House in 2018 and she’s now hard at work on her debut novel. 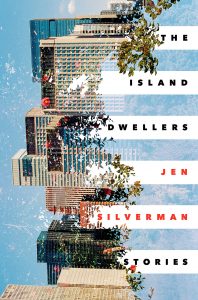 Because of all this success, Witch will be an exciting homecoming to the theatre for Silverman. “I think when you’re doing nothing but theatre it can be easy to get really worn down by the grind,” she reflects. “The industry can be brutal, and it can be so hard to make a living from it. But when you go away for a little while, and you find yourself missing theatre and then you get to come back, that kind of love affair is the feeling I went into it for in the first place. I am so interested in how theatre facilitates intimacy. Intimacy with an audience, intimacy inside of the play that’s being made. I feel like The Gillian Theatre at  Writers Theatre is the perfect space to encounter this play for the first time.”