Baptism by Moonlight: A MOON FOR THE MISBEGOTTEN Awakens our Inner Moral Compass

The most notable thing about William Brown’s rehearsal room is the laughter. A Moon for the Misbegotten is certainly a play with a lot of cheek, but on the page it is hardly an uproarious comedy, at least in this humble dramaturg’s opinion. Yet, during our design run I found myself clutching my sides all through act one. It is the spirit of the cast and the crew and ability to discover joy and absurdity in immense personal pain.

There is a lot of pain in this play. Josie is navigating the pain of intimacy and connection, while Jim Tyrone navigates grief and forgiveness. They circle around each other like two planets in the same gravitational pull, completely at odds with one another yet intrinsic to the other’s survival. What is most relevant to me about A Moon for the Misbegotten in this day and age is the relationship dynamic between Josie Hogan and Jim Tyrone. Josie is a woman described as “strong as a bull,” and “a fighter,” and it’s implied she can take on her own father and whomever else wants to challenge her. Jim Tyrone is someone she should be able to brow beat like any other man that approaches her with disrespect, if needed. However, she does not. She allows herself to be at the will of this person’s emotions and temper, and I cannot stop wondering why. It may be that it’s easiest to let those we love hurt us. It may be that the play was written by a cis man. 🙂 I would go so far as to say it’s a physical manifestation of choosing to be at someone’s mercy under the great risk that they will not be merciful. This is something we all have done, and whether we know it or not, it was a great test of the other person’s character.

This is the painful precipice on which this play is balanced. A mercurial and haunted man is trying to evade ghosts that have followed him for quite some time. What sets Jim Tyrone apart from other tortured male protagonists is that Jim Tyrone is disturbed specifically because he knows exactly how much pain he can cause with his privileged male body. What’s more, is that he actually admits that, out loud. As it relates to our current #MeToo movement, we’ve seen a barrage of people coming forward with stories that some masc/male-identified folx would say are just “bad sex,” when in fact they are abuse.

Josie is selfish in her pursuit of intimacy as well, and shows us how we can blunder past our partners needs so easily. Her conflict demonstrates the danger of playing the role of a seductive woman that society simultaneously rewards and dismisses. It is the age old Madonna/Whore complex, where a woman can be respected so long as she is considered virginal, and is offering herself to be objectified if she is less than virtuous. 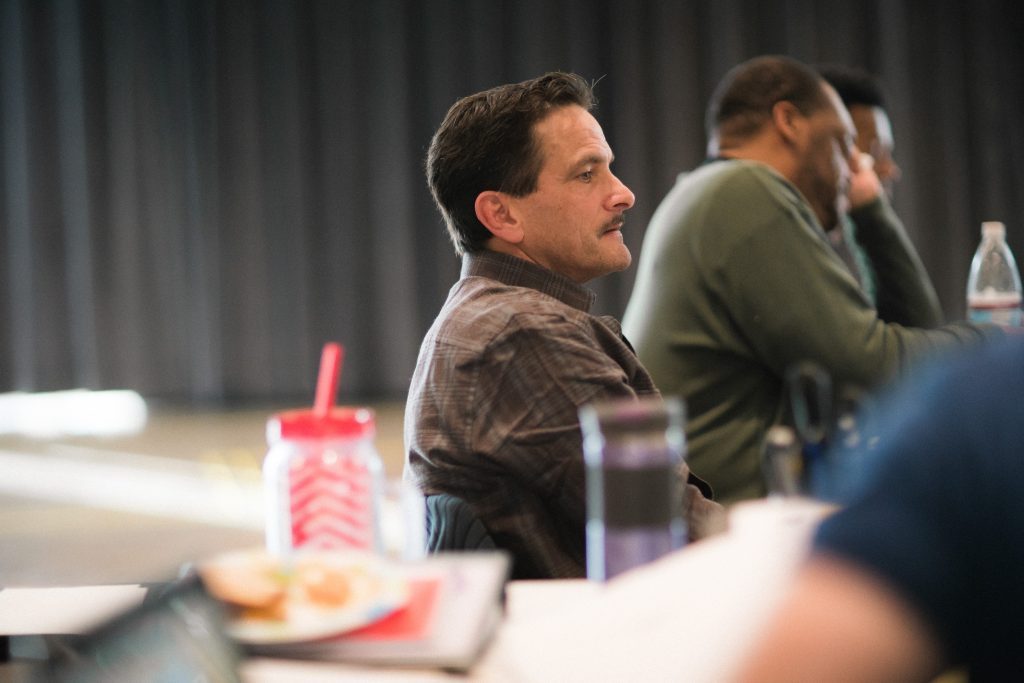 Pictured: Jim DeVita in rehearsal for A Moon for the Misbegotten. Photo by Joe Mazza—Brave Lux.

Masc folx who find themselves in Jim Tyrone’s shoes don’t tend to own upto the possibility they may have hurt someone in the past, however, and many get very defensive and even hostile if such a thing is suggested. When the painful truth behind Jim Tyrone’s past comes to surface, we see it break his body and spirit. The pain that accompanies an admission of harm makes me think this is why masc folx may not want to admit hurting others in their own lives. A Moon for the Misbegotten is ultimately a long road to absolution, and that road is not easy. As witnessed in Jim DeVita’s performance, Jim Tyrone is turbulent and upset and joyous and disgusted. But once he realizes that he has done something terrible, and owns up to it, and makes a different choice, he is significantly more whole. He is living instead of surviving.

If we all owned up to the ways in which we harm each other, large or small, or the ways in which we allow ourselves to be at someone else’s mercy, would we each see our own new beginnings? I like to think that a dawn is possible for all of us if we exercise our personal power to exorcise our demons. A Moon for the Misbegotten encourages transparency with yourself and others, a desire to treat others’ vulnerabilities with kindness and mercy, and ultimately finding joy in unexpected connections.