The Decline of the Heartland

“There was a frantic knocking and banging at the door but neither of them paid any attention.” Sam Shepard, The One Inside

In recent years, it has become increasingly apparent that a portion of America is feeling left behind or uncomfortable with the way the country is moving. We see this dynamic clearly demonstrated in Buried Child. Shepard’s play features a family that has been left behind, perhaps to such a degree that it’s questionable whether they even occupy the same reality as those outside their world. This sense of disconnect is common in Shepard’s work. In his plays, he often explored what stays in our memory and subconscious and what we forget. In Buried Child we see some characters who remember each other, while others are unable to. 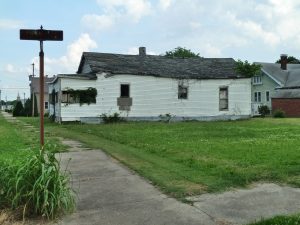 Pictured: An abandoned villa in the suburban remains of Cairo, Illinois. Cairo is the southernmost city in the State and grew to economic prosperity as a steamboat port and railroad hub. Between the 1930s and 1960s, the population in Cairo remained fairly steady, around 15,000 residents. In 2016, the population was estimated to be 2,359 residents. Image via Wikipedia Commons.

Buried Child premiered in 1978. The divide between urban and rural America was steadily widening by that point, and the gap has only increased in the decades since. Despite 72% of the country being classified as rural in 2016, only 14% of the U.S. population lived in those counties, down from 44% in 1930. According to a 2017 report from the United States Department of Agriculture, the rate of people migrating from rural counties to metro counties was at its highest in the 50s and 60s. However, the birth rate was high enough at the time that rural counties still gained in population, despite the out-migration. Out-migration spiked again in the 1980s but was again offset by a high birth rate. However, from 2010-2016, for the first time in American history, the overall population of rural counties fell. The birth rate was no longer high enough to offset the out-migration rate. Because the majority of those leaving rural communities are young people, the rural population is also aging. As Alana Semuels wrote in her piece “The Graying of Rural America” for The Atlantic, “roughly one-quarter of seniors live in rural communities, and 21 of the 25 oldest counties in the United States are rural.”

Not only are rural areas losing population, the quality of life there is also deteriorating.

Not only are rural areas losing population, the quality of life there is also deteriorating. From 2000 to 2013, the number of rural counties where the poverty rate was 20% or higher increased from 20% to almost 33%. While urban areas experienced an increase in poverty during the Great Recession, rural areas saw this increase both before and after the recession, as well. And whereas rural areas had lower rates of cardiovascular disease and cancer mortality than large metro areas in the 1980s, by 2014 the order had reversed. Rural areas also now have the highest rates of unemployment and divorce. Reasons for all this are varied, but a key component is the industrialization and modernization of farming, which now requires far fewer workers than it did historically. In 1900, 40% of the American population worked in agriculture. By 2000, that number was 2%. In all, the schism in America that Shepard observed while writing in the 1970s is still very much unresolved in our current moment. 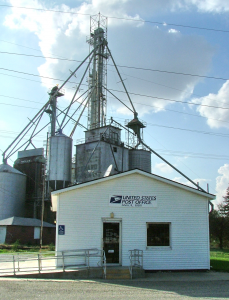 Pictured: Post office in Alvin, Illinois, with grain elevator in the background. The population was 316 at the 2000 census. The estimated population was estimated at 270 as of 2010, a loss of 14.6%. Images via Wikipedia Commons.

While Shepard’s work is synonymous with the American west, and the rest of his major plays are set in the wilder parts of California where he grew up, Buried Child is set in a different region entirely: the midwest. Rural Illinois serves as the perfect setting for Shepard’s surreal dissection of the compromised American dream. However, this region that is often referred to as the “Heartland” adopted the name only recently. First coined by a British geographer in 1904 in reference to the strategic importance of landlocked Eastern Europe, the term was taken up around the world after World War II and began to be used on all continents. Soon, the Midwestern United States was being called the “American Heartland.” At first, the term was used more pragmatically; the region was geographically in the center of the country as well as the vital center of industry and manufacturing. Gradually, it has become more sentimental in its usage, conjuring images of small towns and farms. After the 1980s, “writers used the ‘Heartland’ to capture the idea that Midwesterners were more stable, cautious, and traditional than folks in other regions,” according to a Newberry Library essay entitled, “Rethinking the Heartland.”

“Midwesterners were more stable, cautious, and traditional than folks in other regions.”

Of course, at the same time that the name “Heartland” was becoming more resonant, the nostalgic way of life it referred to was fading away. As the rural population declined, “Heartland” became a popular term used to counter this image of decay. “For journalists writing about factory closings it was a convenient way to frame human-interest stories,” continues the Newberry Library essay. “For Hollywood filmmakers the Heartland hit the right sentimental marketing notes. And for conservative political activists, the idea of the Heartland captured the moral and political high ground in their struggle against liberalism. When the economic boom of the 1990s spread housing subdivisions farther than ever into the countryside, more suburbanites could imagine themselves as backyard farmers. The modern meaning of Heartland took hold. A time and place created by globalization but imagined as timeless, a consciously promoted landscape of forgetting.”

This intent to obscure the realities of the present and remember only the fondest memories of the past is at the heart of Buried Child. Dodge, Halie, Tilden and Bradley have been able to ignore the knocking at the door for a very long time, but the arrival of Vince and Shelly will cause this “left-behind” American family to confront reality and remember the things in their past.