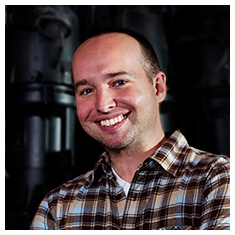 Bobby Kennedy: You’ve said that one of the inspirations for Marjorie Prime was your grandmother, who experienced memory loss towards the end of her life. How has she influenced the play?

Jordan Harrison: By the time my grandmother was in her early 90s, my parents were driving an hour and a half every day to visit her in assisted living. And part of caring for her was reminding her who she was on a daily basis – the people she loved, the interesting things she had done in her life.  When you “talk” to an artificial intelligence program, you’re feeding it information so that it can sound more human. And part of what my parents were doing for my grandmother was keeping her human, keeping her aware of all the things that made her her. So I can’t remember whether Marjorie Prime began as a play about my grandmother, or a play about A.I, but the parallel was there to be made. As Marjorie loses more and more of the details from her life, the Prime remembers more and more. Is there a point at which there is more of her in the Prime than in herself?

One of the things my dad loved to talk about with my grandmother was a young boxer who had been infatuated with her more than half a century ago. And I don’t know exactly how much he was embroidering, but through sheer repetition it started to sound like an Affair for the Ages. I don’t know that she entirely bought into it – she knew that there was an element of fantasy in it, and I think she enjoyed the fantasy.  So obviously this was not only about my grandmother, but about my dad too. He had some kind of an investment in the boxer story, an investment in my grandmother being the sort of person who had had a glamorous life. A life that contrasted with the grayness of assisted living. So in a way, he was giving her the information that he needed her to have. Which is very much how the humans in the play interact with the Primes.

BK: In the process of writing the play, you read Brian Christian’s The Most Human Human about Artificial Intelligence and the Turing Test. Had you had a prior interest in that subject? What effect did the book have on you?

JH: For a couple years, I felt like I had a play about Artificial Intelligence in me. And I read Brian Christian’s wonderful book about the Loebner Prize, which is a competition for A.I. programmers. It’s a kind of Turing Test, which was devised by the British mathematician Alan Turing, based on a Victorian parlor game. Basically, there is a computer and a human being in another room, and you ask them both questions. And you have to guess, based on their answers, which of them is a human and which of them is a computer. A.I. programmers have become very accomplished at designing programs that mimic typos and slang and non-sequiturs and off-color remarks and other “human” things. (Recently an A.I. program won the Loebner Prize by pretending to be a Russian teenager who didn’t speak fluent English.) So originally I wanted to write the play in collaboration with an A.I. program. I would “talk” with a chatbot and our exchange would become the dialogue of the play. Then it would be performed with two human actors, and the audience would have to guess which was the computer and which was the human. The play itself would be a kind of Turing Test. But what I found was that the software (at least the kind that a civilian can get ahold of) is not quite ready to hold up its end of the conversation. So that was good news for mankind and bad news for the play. So I ended up writing the play without computer assistance, but I imagine I will try the A.I. collaboration again in 10 or 20 years!

BK: I read that you often start a play with a concept and then move away from it as the plot and characters come into focus. Where did Marjorie Prime start? What steps led to the play as it is now?

JH: When I started writing Marjorie Prime, I’d just been through a really harrowing series of tech rehearsals for my play Maple and Vine, which unfolded almost like a Broadway musical – many locations, lightning-quick costume changes – I think I lost years of my life holding my breath in the audience, waiting to see whether trap doors closed in time for actors to walk across them. That sort of thing. So when I moved on to Marjorie, I liked the idea of a play that was bound to a couch but didn’t feel “small.” I liked the idea of the actors themselves being the special effects. I think I knew all that before I knew who Tess, or Jon, or Walter were. There is only one theater-magic event in Marjorie, and for the rest of the play it’s the special effect of an actor sitting in front of you who might not be as flesh and blood as they seem.

I did several developmental workshops and readings of the play, shopping for a home for it. Lois Smith, who played Marjorie in the premiere at the Mark Taper Forum, did the very first table reading. There were about as many people in the audience as there were actors. I remember Lois was there a half hour early, highlighting her script with a marker. And she was with the play, in nearly all of its incarnations, all the way to the Mark Taper production. The play didn’t change so very much in that time – it feels more like I’ve gotten better and better at talking about it in rehearsal, at pulling the right things from it.  Throughout that process, Lois’s belief in the play has been enormously valuable to me.  And it’s been tremendous to have a friendship with an octogenarian who has more energy and a more active social life than I do!

BK: In addition to playwriting, you’ve also been working as a writer on Netflix’s TV series Orange is the New Black. How has it been balancing your writing for two different mediums? Does your work in one influence the other?

JH: Right before I went into my interview for Orange, my agent said, “Be yourself, Jenji likes weirdos.” And I did a double take, like “Did my agent just call me a weirdo?” But it’s true that my boss, Jenji Kohan, thrives off of anything idiosyncratic, anything personal – people’s anecdotes about their spouses, gross habits, exotic phobias… When I first started looking for TV work, I wondered if I’d have to temper my voice, and tuck in my shirts, and use corporate lingo. But I still feel like the same writer who stepped into the Orange writer’s room two years ago. The problem of balancing TV and theater is less about artistic schizophrenia and more about time management. When the first production of Marjorie Prime was in previews in L.A., my “Orange” episode was shooting in New York. There was an insane eight hours where I had to leave the opening night party for Marjorie after 25 minutes, rush to the airport, change in the bathroom at LAX, red-eye to New York, sit in 2 hours of traffic on the BQE, and I arrived on the “Orange” set just in time to watch Laverne Cox and Selenis Leyva duke it out in the prison kitchen. It was stressful to say the least. But a year later, I can see that that’s the life of a very lucky person.