In more than four decades of writing for the theatre, Caryl Churchill has completely revolutionized how plays can be written—and she continues to reinvent the genre with each new work. 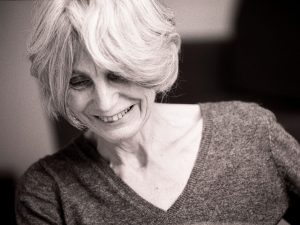 In a 2018 tribute prior to Churchill’s receiving the Writers’ Guild of Great Britain Award for Outstanding Contribution to Writing, playwright Lucy Kirkwood called her “a writer of protean gifts, completely lacking in complacency. Simply put, she is the only person writing today who says something new in both form and content every time she puts pen to paper. Her work is profoundly political, but never didactic, charged with metaphorical power not journalistic editorial.”

Churchill was born in London in 1938. Her family moved to Montreal, Quebec when she was ten, but she returned to England in 1957 to attend Lady Margaret Hall, a women’s college at Oxford University, where she studied English Literature. A year after graduating school, she married David Harter, a barrister, and started a family while living in London. The aspiring dramatist had written several plays while a student, and during the 1960s, while raising her three sons, she turned to writing short radio plays for the BBC. As Churchill told The Guardian in 1972, “Radio is good because it makes you precise. Then there’s the freedom. You can do almost anything in a radio play.”

Even so, Churchill wasn’t happy with her life. In a 1987 interview with The New York Times, she explained, “I was fed up with the situation I found myself in in the 1960’s. I didn’t like being a barrister’s wife and going out to dinner with other professional people and dealing with middle-class life. It seemed claustrophobic. Having started off with undefined idealistic assumptions about the kind of life we could lead, we had drifted into something quite conventional and middle class and boring. By the mid-60’s, I had this gloomy feeling that when the Revolution came, I would be swept away.” Having similar feelings about his career, Churchill’s husband began offering legal assistance to people in dire financial situations. Meanwhile, Churchill funneled her feelings of restlessness and social responsibility into writing for the stage.

The playwright’s interest in exploring political issues (particularly feminism and social inequality) in non-polemical ways immediately won her attention, as did the fact that she never wrote the same style of play twice. Owners, Churchill’s 1972 stage debut, is about predatory landlords. Vinegar Tom, which followed in 1976, dramatizes the witch-crazes of 17th-century England and how the country demonized its women, alternating scenes set in the 1600s with contemporary songs performed in modern dress. Also debuting in 1976, Light Shining in Buckinghamshire, another historical political play, explores the English Civil War and the country’s failed radical attempt at a new democracy, complete with a lengthy scene dramatizing the Putney Debates of 1647.

While these early plays impressed, Churchill would break through in a major way with her next play. Cloud Nine is just as restlessly ambitious and political as her previous works, but this time Churchill chose drawing room comedy as the stylistic vehicle with which to explore topics of fluid sexuality and the legacy of Victorian colonialism and morality. She also experimented with non-realistic jumps in time and place, setting act one in 1800s British Africa and act two in London in 1979, but acknowledged as if only 25 years had passed for the characters. After Cloud Nine’s world premiere at the Royal Court in 1979, the play was produced Off-Broadway in 1981 and ran for two and a half years, winning Churchill her first Obie Award.

Top Girls, Churchill’s next play, enjoyed equally acclaimed runs in London and New York in 1982, winning Churchill an Obie for the second year in a row. A play about the effects that competing in a hypermasculine professional world can have on working women, it famously opens with a dinner party attended by notable women from across history. Also revolutionary was Churchill’s use of overlapping dialogue, demonstrated in print by a “/” in the middle of a line of dialogue which indicates where the following line should begin, even though the previous character hasn’t finished speaking. This method of punctuation is now used throughout the playwriting world.

It should be abundantly clear by now that Churchill is not like most playwrights. Although both Cloud Nine and Top Girls received worldwide success and became studied classics of postmodern drama, and her 1987 play Serious Money was a West End hit and even played Broadway, the playwright continued to follow her own interests. Unlike some of her famous contemporaries, she has never written for film or television, or completed a novel. She also stopped giving interviews during the 1990s, preferring to let each new play of hers speak for itself with no further explanation from its author. 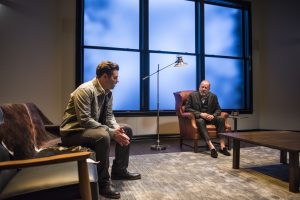 A Number is one of Churchill’s most traditional works in many ways. The play features just two actors, five scenes, and no important design requirements. It would appear to be a simple story about a father and a son. But of course, Churchill is exploring the new frontier of genetic engineering, making this familial relationship more complicated than any of the characters first realize. The play premiered at the Royal Court in 2002 with Michael Gambon in the role of Salter and Daniel Craig playing Bernard in a production directed by Stephen Daldry. Two years later, the play made its New York debut at New York Theatre Workshop with Sam Shepard and Dallas Roberts in the two roles, and the production won Churchill her fourth Obie Award.

Churchill turned eighty last year, but her creativity and output haven’t remotely slowed with time. Love and Information (2012) has 57 scenes, over a hundred unnamed characters, and was presented with a cast of sixteen in New York. Her newest work, Escaped Alone, presents four septuagenarian women having tea in a backyard together—with the play continuously pausing for one of them to deliver an apocalyptic monologue to the audience about a dystopian disintegration of society—and it made several 2017-year end lists in both London and New York. Speaking in 2004 to The New York Times about Churchill, James Nicola, the Artistic Director of New York Theatre Workshop said, “If you look at the arc of her creative life, she’s someone in her 60’s who is as out on the edge and willing to reinvent herself as she was in her 20’s. Most artists—whether painters or novelists or composers—find some sense of what their voices and concerns are in their 20’s and 30’s, and in their 60’s and 70’s they’re still doing variations on it. But it’s not true of her. She’s as fresh and new and unpredictable and inspiring now as she was at the beginning of her working life.”