Better Than Before: The Making of NEXT TO NORMAL

How do you write a hit Broadway musical about mental illness? 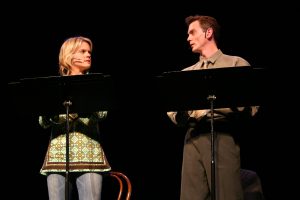 The short answer is, it takes a long journey. The long answer is a story of curiosity, perseverance, revisions and a collective belief from a dedicated artistic team that this was a story that needed to be told. Even today, mental health issues are stigmatized in many societies despite the fact that so many people are affected by them, whether through their own illnesses or that of a loved one. Next to Normal portrays a family dealing with mental illness from various perspectives: those suffering from it, those with relatives suffering from it and those who fear they may suffer from it down the road. Odds are, most people can relate to one or more of these perspectives, which helps clear the fog on why Next to Normal’s widespread success isn’t such a surprise after all. Never before had a Broadway musical tackled the issues of mental health in a way that brought stigmatized illnesses to the forefront. And yet, the journey to Broadway was a long one. 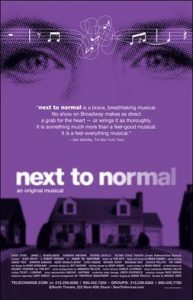 Original poster art for the 2009 Broadway production of Next to Normal.

Next to Normal had its humble origins as a different show, and a much shorter one at that. Writers Brian Yorkey and Tom Kitt met in college at Columbia University, where they collaborated on a variety of projects. After graduation, they attended the Broadway Music, Inc. Musical Theatre Workshop in 1998 where they had to write a final project. Yorkey and Kitt knew they wanted to do something nontraditional and out-of-the-box. As the deadline loomed, the two still had no idea what they wanted to write about. But inspiration can strike at any time and from unlikely sources. One night, Yorkey was watching a news piece on NBC about electroconvulsive therapy, or electroshock therapy as it was formerly known. “I didn’t know that it was still practiced,” he explained in an interview with PBS. “I’ve come to learn much more about it but at the time it just sort of surprised me and really got me sort of thinking about the kind of person who would have to have that sort of treatment in their lives. And so I called up Tom and I said ‘what about a musical about a woman who has struggled with depression for her whole life and has to turn to ECT.’ Tom said, ‘Let’s give it a try,’ and off we went.”

Feeling Electric was the result, a ten-minute musical sketch about a woman undergoing electroshock therapy for bipolar disorder. Reactions at a workshop presentation ranged from surprised to genuinely affected, and a question arose: could this kind of material work as the basis for a full-length musical? In an interview with BroadwayWorld, Kitt explained that it was the number of people who were moved by the piece “that gave us the courage and enthusiasm to go forward and keep writing songs for it. Eventually, we kind of felt like that we said we weren’t going to finish writing the show, but that’s all we seemed to want to write.”

Yorkey and Kitt did shelve Feeling Electric for a time to pursue other paths. Kitt stayed in New York to work as a musical director and conductor, while Yorkey became the Associate Artistic Director of Village Theatre in Issaquah, Washington. Still, the duo kept coming back to the musical. In 2005, Village Theatre hosted a workshop production of a more comprehensive draft of the piece. Using the feedback from the production, Yorkey and Kitt developed Feeling Electric into a full-length musical which was again workshopped later that year at the Barrow Theatre Group in New York.

While reworking the piece, the writers learned “a great lesson—that the show comes first.” (Tom Kitt, Interview with BroadwayWorld, Jan. 7, 2011). They initially They initially held onto Feeling Electric and the songs they wrote for it, but soon realized that in order for it to grow into a full musical, changes had to be made. “[Feeling Electric] was about a lot of different things and, also, was meant to be a little fantastical,” explained Kitt. “And think Next to Normal wanted to become omething that was much more grounded and much more about this family.” 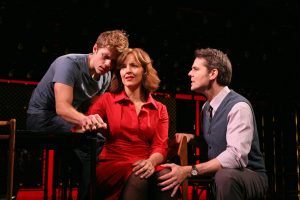 Aaron Tveit as Gabe, Alice Ripley as Diana and J. Robert Spencer as Dan at Arena Stage in Crystal City through January 18, 2009.

In 2008, the musical had its Off-Broadway debut under the new title Next to Normal. Directed by Michael Greif and starring Alice Ripley, Brian d’Arcy James and Aaron Tveit, the Second Stage production enjoyed commercial success, but opened to mixed reviews. Instead of transferring to Broadway at that time, the creators brought the musical to Arena Stage in Washington, D.C. later that same year for another production with most of the same cast to continue refining the script and score. The biggest change they decided to make was to tone down the more glamorous, “big theater” moments in the show. Several numbers got cut and replaced with entirely new songs. The Act One closer and the show’s biggest number, “Feeling Electric,” was removed entirely. Added at the top of Act Two was the mother-daughter song “Wish I Were Here.” The decision to focus on the smaller, more intimate moments between the mother and her family resonated with audiences, launching the production back to New York, this time on Broadway.

On April 15, 2009, Next to Normal opened at the Booth Theatre to commercial and critical acclaim, thereby marking an end to its developmental journey and a new start to its widespread success. The entire cast from the Arena Stage run returned, as well as director Michael Greif. At the Tony Awards, the musical was nominated for 11 awards and won in the categories of Best Original Score, Best Orchestrations and Best Performance by a Leading Actress for Alice Ripley’s portrayal of Diana, the mother of the family. Next to Normal also received the Pulitzer Prize for Drama, becoming the eighth musical in history to do so (since then, Hamilton is the only other musical to win the award). Upon bestowing the award, the Pulitzer board described Next to Normal as “a powerful rock musical that grapples with mental illness in a suburban family and expands the scope of subject matter for musicals.” The Broadway production ran for almost two years, and also launched a national tour. The musical now continues to spread awareness of mental health issues through numerous regional and international productions from Oslo, Norway to Lima, Peru. While Next to Normal focuses on a suburban American family, issues relating to mental health and family can affect anyone, no matter where they’re from. 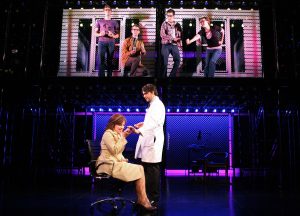